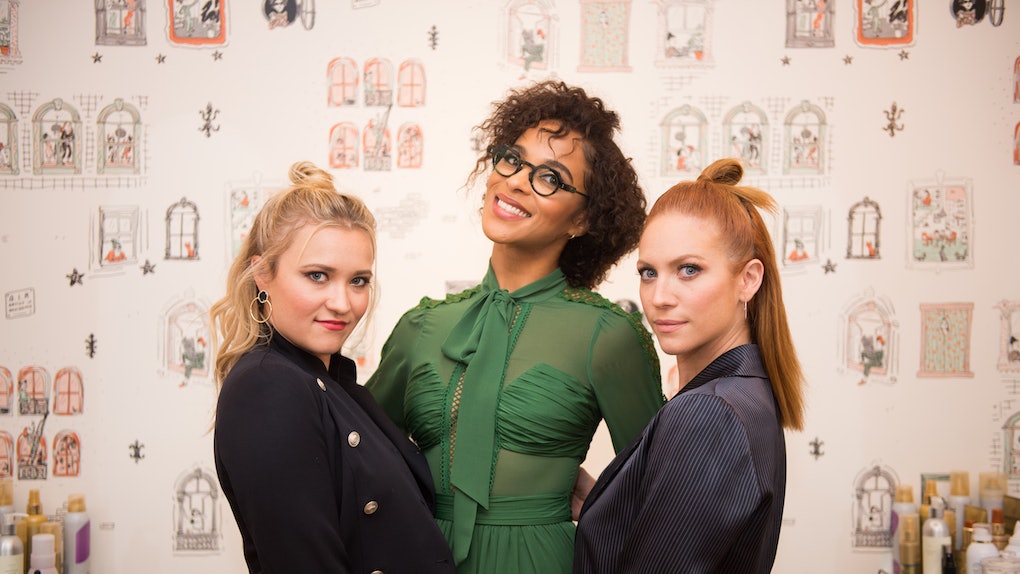 The premise of Fox's new show Almost Family is certainly not a lighthearted one: An only child finds her life turned upside down when it's revealed her father, a celebrated fertility doctor, used his own sperm to help conceive dozens upon dozens of children. But if the plot isn't enough to convince you, the Almost Family cast certainly will. Leading ladies Brittany Snow, Emily Osment, and Megalyn Echikunwoke promise the series tackles some pretty heavy stuff, so fans should probably buckle up.

At a screening of the Almost Family pilot held at The Wing SoHo, Snow, Osment, and, Echikunwoke discuss the dramatic — and, let's be real, extremely timely — premise of the series. "What I loved when I first read the pilot script is that 10, 15 years ago, this type of TV show wouldn’t have even gotten made, where a white, male doctor is being held accountable for his actions and actually falls from grace," Snow says during a panel following the screening. "I think it’s super important to the show, that this is the focal point: We are the women who are trying to figure out why he did the things he did. It’s not necessarily all about him.”

In an interview with Elite Daily after the panel, the trio got more into the more personal ramifications of the show's premise, which includes their characters — Julia (Snow), Edie (Echikunwoke), and Roxy (Osment) — finding out they are genetically related to one another (and 100 or so other people out in the world).

"I think this show is rooted in a lot of different fundamental messages, all related to family," Osment says. "I mean, family can be a biological family; it can be people that you choose; it can be just yourself ... We deal with that a lot on the show, just finding your place and being OK with where you are, that’s a big one."

Echikunwoke adds: "I also hope that one of the major things that comes up is that it’s a show about figuring out what brings us closer together and what we have in common, as opposed to what separates us. Especially in this world and in this society and the current human condition."

In addition to the main storyline of the fallout from the genetic tampering carried out by Julia's father, Dr. Leon Bechley (Timothy Hutton), viewers will also see deeper into the personal lives of the three main characters, and it's definitely going to be emotional. Osment, whose character is a former Olympic gymnast with a strained relationship with her parents, hints it's going to get pretty dark, especially for Roxy. "I think we’re going to see her at her very lowest lowest low this season, which is cool because then she’ll only have upwards to go," she says. "Sometimes you have to hit rock bottom first before you get there."

Of course, for a show that's so focused on family, there must be some heartwarming moments as well, especially among the show's three main characters. Although there are, of course, male siblings in the mix of "Bechley babies," as they quickly become known as, sisterhood seems to be a big theme of the series. "To me, one of the fundamental things about sisterhood is, like, the support, because I think in life women can give each other a really hard time often," Echikunwoke says.

With all the hardships these characters are set up to deal with in Almost Family, it sounds like they're going to need as much sisterly support as they can get.