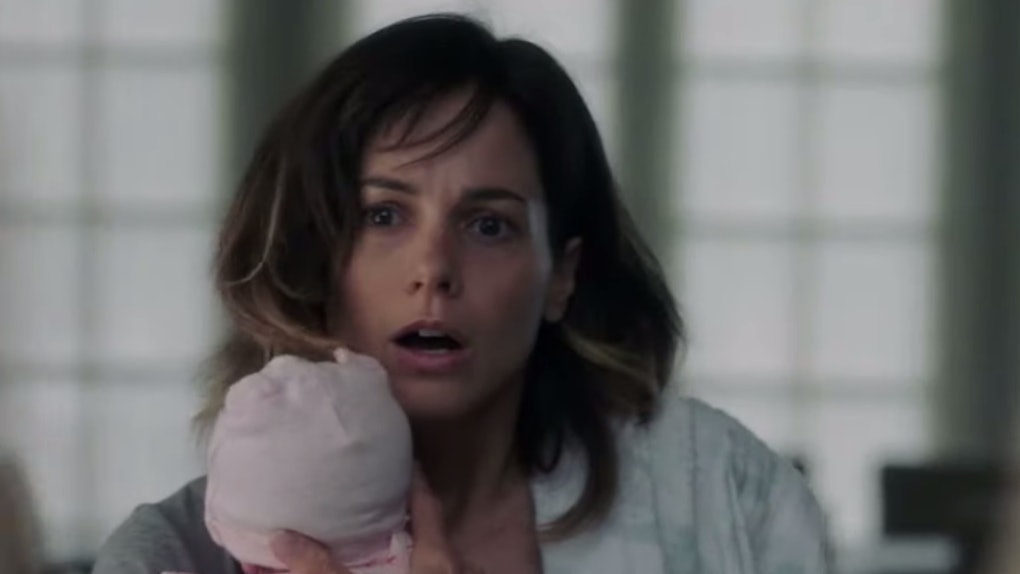 After a long stretch of seven months without Rome, Gary, Eddie, and the rest of their flawed, lovable friend group, A Million Little Things is finally back! The Season 2 premiere episode kicked off with a bang — and a birth — and set all the characters up for a dramatic season to come. And it looks like the storylines are going take off pretty quickly; look no further than the A Million Little Things Season 2 Episode 2 promo for proof of that.

Warning: Spoilers for Season 2 Episode 1 of A Million Little Things follow. Season 2 kicked off right where the Season 1 finale left off, with Eddie (David Giuntoli) confessing to Katherine (Grace Park) that Delilah (Stéphanie Szostak) was about to give birth to his baby, not Jon's (Ron Livingston). Obviously, this was upsetting to Katherine, as she and Eddie had just been on the brink of giving their marriage another shot. Despite all this, Eddie joined his friends (who all learned the truth about Eddie's fatherhood status) at the hospital to support Delilah while she brought their new baby into the world.

The rest of the episode focused on Eddie's quest to find Katherine (who disappeared to her mother's house while Eddie was with Delilah), Rome (Romany Malco) and Regina's (Christina Moses) disagreement over wanting a baby of their own, and Delilah's struggles with her newborn, who she named Charlotte.

Gary (James Roday) and Maggie's (Allison Miller) storyline may have been a little light in the season premiere, but the next episode looks like it's going to be a big one for them. The clip opens with the couple (who recently moved in together and are celebrating Maggie's cancer-free status) unloading the luggage of Maggie's mom, Patricia (Melora Hardin). Though Gary and Maggie seemed to believe Patricia was only coming for a visit, it looks like she might be staying in Boston for a lot longer, as she reveals in the promo she left her husband, Maggie's father. While I am always excited to see Melora Hardin (aka Jan from The Office) on my screen, her presence probably spells trouble for the fan-favorite couple of the show.

The promo then jumps to Eddie and Katherine, who appear to be keeping up appearances for their son, Theo, while they figure out their issues. Unfortunately for supporters of their love story, it's not looking good. "[It's] hard to pretend everything is fine when it's not," Katherine says in the promo.

But perhaps the most shocking scene the promo teases is the one with Rome and PJ (Chandler Riggs). As a refresher, Rome and PJ met back in Season 1 when they were both at the hospital and connected over Rome's script as well as their mental health struggles. Audiences soon found out that PJ is the son of Barbara Morgan, the woman who was dating Jon's best friend Dave when he died in the Sept. 11 attacks. At the end of Season 1, Barbara revealed to Delilah that Dave is PJ's real father, and that her husband Mitch has been raising the teen as his own. However, PJ has been kept in the dark about all of this, and has only just begun picking up clues about his true parentage. As of the Sept. 26 episode, it seems like PJ thinks Jon, not Dave (or Mitch), might be his real father, and he appears pretty intent on learning more. Luckily, it looks like he'll get more answers in Episode 2, since the promo shows PJ looking at a picture of Jon and asking his pal Rome about him.

If you've seen A Million Little Things, you know this show could go in any direction with any of these storylines. Your best bet is to hang on tight for the roller coaster of emotions that are coming your way this season.

A Million Little Things continues on Thursdays at 9 p.m. ET on ABC.