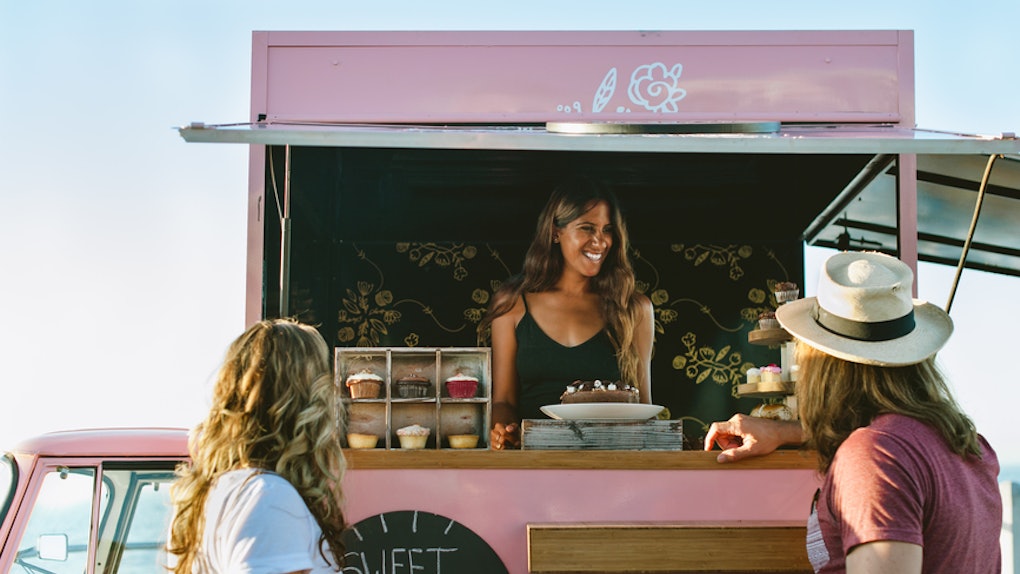 If food trucks had an anthem, it’d be, “started from the bottom, now we’re here.” Seriously, if any part of the culinary culture has made great strides to improve its market, it’s the vans on the side of the road that, once upon a time, were just clunky vehicles selling too-strong or too-weak coffee and old bagels; they are now solid contenders in the food industry. Some of the best food trucks in your favorite cities probably go either unnoticed or ignored, because there’s always been a bit of a stigma around food trucks that you get what you pay for: cheap food. Nowadays, though, I think it’s safe to say that that toxic stigma is well on its way out.

While some food trucks may very well still be grimy and serve low-quality takeout you probably should pass on, mobile dining has drastically improved as a whole, and you need to take part in this great American pastime. Trust me, this is coming from someone who used to think dirty water hot dogs were the sh*t. If I weren’t mostly meatless, I’d definitely still pause for a hot dog cart in the city, but legitimate food trucks with ovens, stove tops, and real chef’s utensils to boot aren’t just selling food, they’re crafting culinary art. How lucky are you to be able to taste their genius?

To get you started, here are some of the best food trucks around the country to add to your foodie bucket list ASAP.

I don't know about you, but I could probably live off of mac and cheese. There's just so much you can do with a bag of noodles and melted cheese. You can add some veggies if you'd like to keep things a little on the healthier side (peas, broccoli, and tomatoes all work well), sprinkle the top of all that cheesy goodness with bread crumbs for crunch, or take a nod from Arby's and "have the meats" with bacon crumbles, ham slices, or even pepperoni for spice. The opportunities really are endless, which is exactly what Marti Lieberman is capitalizing on with her Mac Mart Cart.

Residing in Philadelphia, Pennsylvania, MMC began on the streets of Drexel University, when Lieberman set out with her sister and boyfriend to bring delicious, gourmet mac and cheese to campus. Clearly, cheese sells — so much so, in fact, that Lieberman has expanded her business to a brick-and-mortar location in Philly, with plans in the works to expand even more in the future. Stop by either location to dig into dishes like BBQ Mac, the Corn Dog Cup, and Margherita Mac.

Going plant-based is all the rage right now (I've sworn off most meat since July 2015 myself), but even if you're not exclusively veg, vegan delicacies can please any palette.

Take The Cinnamon Snail, for instance. This all-vegan-everything lunch truck has all the goods, made from strictly earthy ingredients. The catch is, you'd never know from the taste that offerings like Korean BBQ Seitan, Beastmode Burger Deluxe, and the eatery's assortment of delicious baked goods, could all come from such healthy ingredients. Mark my words: This tasty truck has the stuff to make even the pickiest of eaters go plant-based.

Good seafood can be hard to find, but thanks to the Luke's Lobster food truck, you can find a high-quality catch on wheels. Impressed? Same, girl.

Luke's first opened up shop in the East Village in Manhattan, but is now serving up fresh fish dishes, from sandwiches to chowders, all across the country via mobile mortars and stores. What makes Luke's Lobster's so unique is that everything you're eating is sustainable, and can be traced back to the exact harbor it came from. I've got my sights on the classic lobster roll, but you can choose from a variety of dishes like shrimp, crab, cod, and even grilled cheese and hot dogs.

Got a sweet tooth the size of Texas? You're going to want to make a pit stop at Churro Co. This food truck was inspired by traditional Mexican street food, and was born from the idea of two childhood buddies looking to become successful entrepreneurs. I guess you could say the ending to their endeavors is pretty sweet.

Of course, the truck sells classic churros tossed with cinnamon and drizzled with chocolate sauce, but if you're looking to take dessert to the next level, Churro Co. has offerings like the Rico Suave, which is doused in Nutella and strawberry sauce, or The Campfire, which comes decorated with toasted marshmallows and graham cracker sugar.

Whether you consider yourself omnivorous or a straight-up herbivore, one thing I am positive you and I can agree on is this: Tacos are bae.

Guerrilla Tacos in Los Angeles doesn't just make your typical street taco. Chef Wes Avila makes his tacos artistic AF, taking inspiration from the lessons he learned while enrolled in both Californian and French culinary academies. Harmonizing the two cultures into each dish isn't just genius; it's a foodgasm you need to experience if you find yourself in the area. Might I suggest the Fried Oyster Taco? My mouth is watering just thinking about it.

Sandwich trucks are nothing new, but The Fat Shallow has definitely found a way to put its own spin on meat between buns. High school sweethearts Sam Barron and Sarah Weitz cashed in on their love for food with this culinary cab, residing in the Windy City and serving up made-to-order sandwiches that look almost too good to eat (emphasis on almost).

The menu is colorful, and you can really get whatever it is you're craving. Have your pick from classics like grilled cheese and Italian subs, or you can get a little more creative with buffalo chicken or a truffle BLT. The side dishes are just as scrumptious, from seasoned fries to potato salad, and the classic Caesar salad for a (slightly) lighter option.

Purple People Eatery specializes in, and I quote, "fresh, freaky street food." You really can't make this stuff up.

Chefs David Shipman and Michelle Duncan have taken the meals-on-wheels Miami scene by storm with a unique menu you never would have expected to come from a food truck. There's a whole list of burgers to bite into, tacos, mac and jack (Purple People Eatery's signature twist on this soul-food favorite), and truffle loaded cheese fries by the serving.