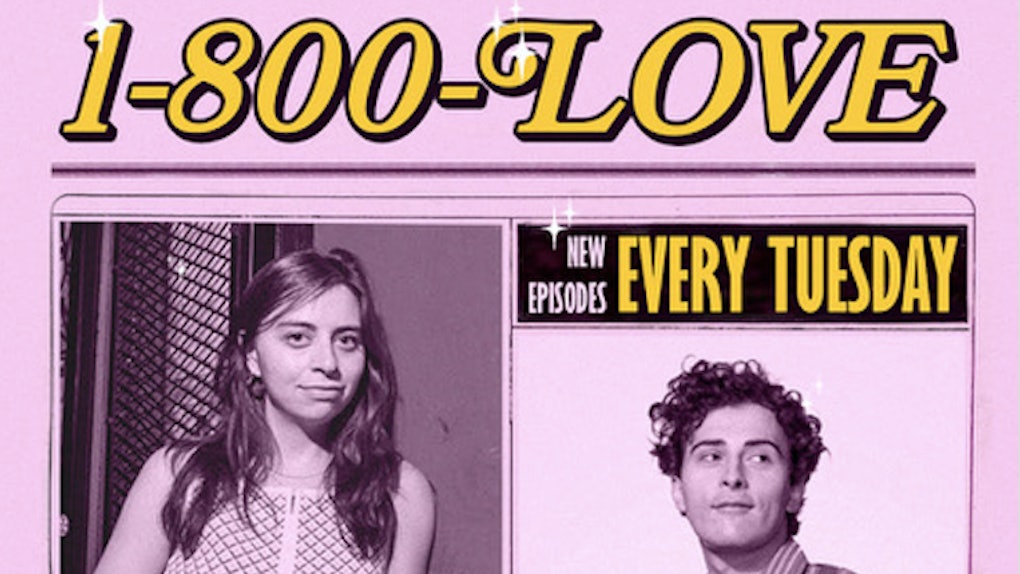 Do you ever get totally fed up with dating apps? When you’ve been swiping constantly to no avail, it’s normal to experience online dating burnout. You might find yourself wishing there were more options for meeting new people — something more old-fashioned, perhaps? The 1-800-LOVE podcast, a new project by comedians Pete Valenti and Manning Jordan, brings back the mystery of dating via anonymous classified ads. Guests share their personality, interests, and what they’re looking for in a partner, and listeners can reach out if they want to make the first move.

As someone who’s a real sucker for outdated methods of communication (I still write letters to my friends on special occasions), I was super intrigued by this concept from the get-go. What Valenti and Jordan are doing is really refreshing — they’re creating a community where people can find love based on hearing someone’s voice, rather than seeing their face on a phone screen. On the show, they interview anonymous queer guests in New York City with fun pseudonyms like “Ethical Girl Seeks Adrenaline-Chasing Eccentric” or “Prince Seeks His Champion.” The guests share whatever they’re comfortable revealing about themselves, and Valenti and Jordan ask them questions about their ideal relationship. At the end, guests will share their preferred method of contact — Instagram, Twitter, or sometimes even email — for listeners to reach out if they want to know more.

I spoke to Valenti and Jordan to find out where they got this idea — and as it turns out, it was born in an unconventional way. The two met doing an open mic night in early 2018 for queer comedians in Brooklyn, New York, and when they first decided to do a podcast, they based it on fictional characters on a search for love. “One day, we kept the recording going, and we were just talking about our own dating lives,” Jordan explains. “And we were like, ‘Wait, this is way more fun than just to make up these stories.’” From there, they started thinking about whose real stories they could tell — and that’s when Valenti came across several old editions of Gay Magazine from the 1970s, which they had ordered on Craigslist to use as DIY collage materials. “We started flipping through them, and thinking how fun it would be to create a podcast version,” Valenti says.

From there, the idea for 1-800-LOVE was born. Valenti and Jordan say they were also inspired by the Instagram account @_personals_, which mimics the old classified ad format for LBTQIA+ people. Like @_personals_, 1-800-LOVE is a merging of old communication tactics with new methods of technology. “We have a podcast, which is this contemporary thing, but using the old element of the classified ads,” Jordan says. “We’re using both the new and the old, which is fun.”

Unlike on dating apps, where you can see photos of the person’s face before you meet them, 1-800-LOVE keeps people guessing about the guest’s real identity. “There’s an element of magic and mystery and mystique, like, who knows what’s going to happen?” Valenti explains. “You’re limiting judgment in the beginning, and simultaneously creating this really intimate way of getting to know somebody.”

Even though the podcast has only been up and running since July 29, two guests have already met up IRL because of the platform. “Two of the people we interviewed ended up going on a date, and they’re going on a second date,” Jordan reveals. While typically, any listener can reach out to the guest (you don't have to have been a guest before), in this case, the guests heard each other's episodes and really clicked. The goal is that, as the podcast continues to grow, it will be the catalyst for many more blossoming relationships.

“There’s a hope that’s inherent to this newness,” Valenti says. “There’s something really beautiful about just hearing what people want and talking about people’s wishes.” As for why the podcast is geared for a queer audience, Valenti and Jordan hope to create a safe space where people don’t have to feel obligated to fit into any particular label. “If you were to go on any sort of dating app, a lot of them do sort of categorize you, in a way that doesn’t allow you to be under the full umbrella of queerness,” Jordan explains.

Valenti echoes that the queer focus is meant to provide a safe, intimate space. “We’ve interviewed a fair amount of people who are attracted to all genders,” they say. “I wanted our guests to feel safe to talk about what they want and talk about themselves in a vulnerable way, and I think there’s something encouraging about the show being explicitly queer.”

1-800-LOVE is available on Apple, Spotify, and wherever you listen to podcasts — and if you can’t get enough of the show, you can donate money on Patreon to get access to episodes a few weeks early. Even if you’re not searching for that special someone, it’s fun to hear other people looking for their own relationships. After all, what’s better than getting invested in a good old-fashioned love story?