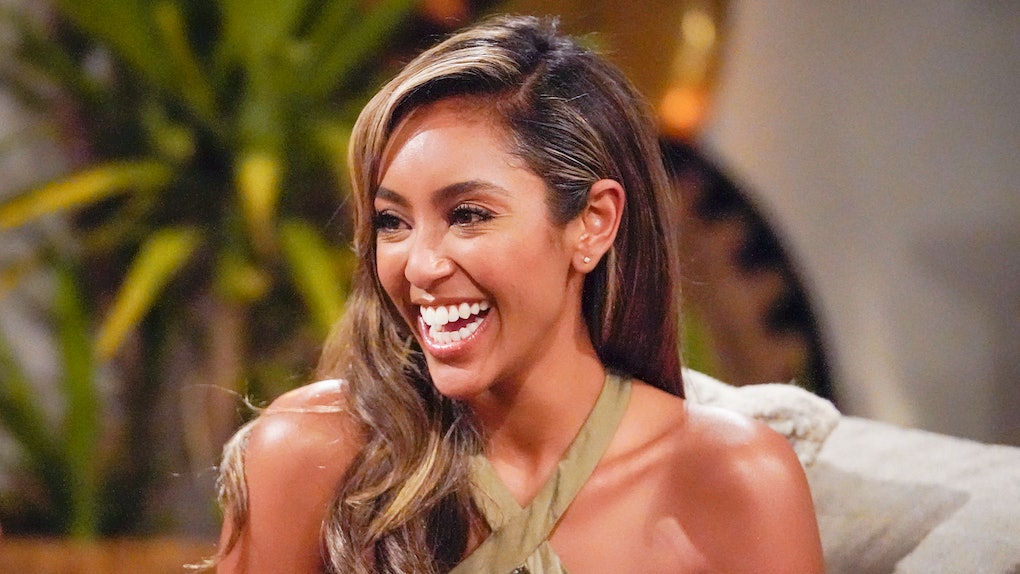 Tayshia Adams' Divorce Affects Her 'Bachelorette' Decisions For This Reason

Tayshia Adams is officially taking the reins from Clare Crawley as the new Season 16 Bachelorette, and she's ready to rep divorcées everywhere. However, because she's been married before, the former phlebotomist says she likely won't fall as hard and fast as Crawley did for Dale Moss. A Nov. 9 interview with Us Weekly revealed why Tayshia Adams' divorce affects her Bachelorette decisions and her approach to new relationships, and the reason makes a lot of sense. "Having been married before, I feel like … I'm not just going to do anything just to do something," she told the magazine. "I'm not going to do it because I feel like I need to or do this and that. I'm going to do it because it's the right thing to do, and I'm excited and happy."

Though her past experiences have made her more cautious with her heart, Adams isn't afraid to open up about her previous marriage and divorce. "It's not hard at all [to talk about] because it's definitely something that I've experienced in the past and it led me to today," she continued. "But I don't want it to define me because it doesn't define me. It's just something that I grew from and I learned from."

According to court documents obtained by Radar Online, Adams and her ex-husband, Josh Bourelle, separated in August 2017 after one-and-a-half years of marriage before Bourelle filed for divorce in October 2017. A year later, Reality Steve broke the news about Adams' divorce on Twitter ahead of her debut on Season 23 of The Bachelor.

Adams publicly spoke about her previous marriage for the first time while on a one-on-one date with Colton Underwood. "This past year and a half has been kind of hard for me, and it's actually because I was married and I got divorced," she told Underwood. "I actually married my first boyfriend, and I was with him for about six years or so. I guess I could, kind of, sense we weren't doing very well. And I think that's why I fought so hard just to try to do as much as I possibly could."

Later, she took to IG to reflect on the moving conversation. "My divorce used to be something I was ashamed of, because to me it represented, not only to myself but to everyone that knew me, that I had failed at marriage, something I value so highly," she wrote, later adding, "It's been a rough journey to pick up the pieces and rebuild my idea of the life I want, but I will tell you this: I would not be able to be the strong, independent, and smiling woman I am today without my faith or the support of my close family & friends that have supported me unconditionally."

She may be ready to put her divorce behind her, but Adams can't quite forget the pain that came with it. In a dramatic Season 16 teaser dropped by ABC on Nov. 6, Adams tearfully confessed to feeling haunted by "the fear of divorce," though she's working to push past that fear. While Adams' approach to relationships will likely be very different from Crawley's, I have a feeling her Bachelorette journey will be just as life-changing.