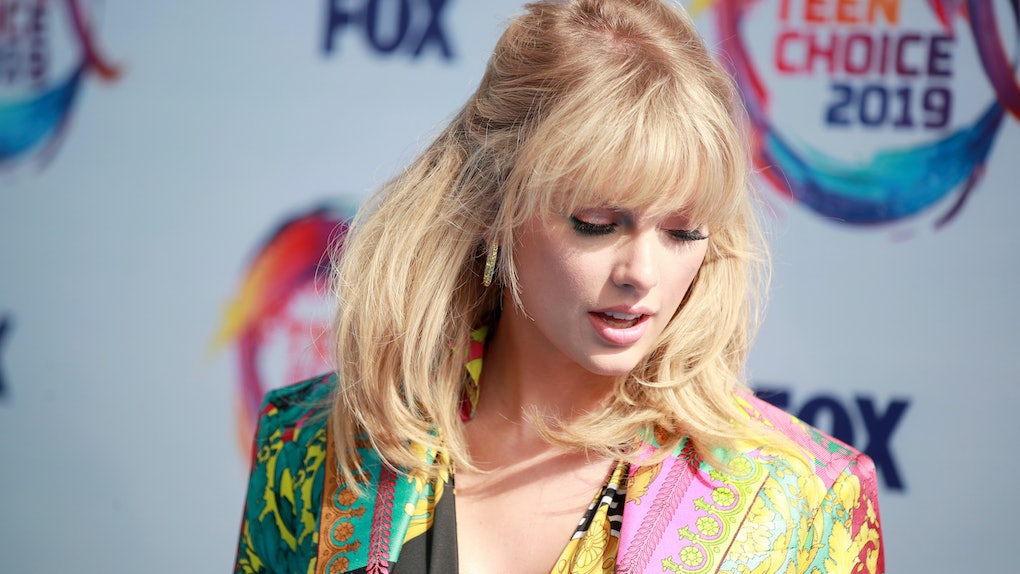 The new Taylor Swift album is here. And with it comes one hell of an emotional song from the singer that will no doubt be considered the "All Too Well" of Lover. Taylor Swift's "Soon You'll Get Better" lyrics are going to yank your heart out. Are you ready for it? Of course you're not.

The song is the only song on the album that features another artist, and it's the motherf*cking Dixie Chicks. Swift teamed up with the iconic country music group (literally, the only one I like) on the hella emotional track that was reportedly written for her mother in response to her cancer coming back. (Swift revealed in a March 2019 essay for Elle her mother's cancer had returned.)

Fans were already prepared for this song to be an intense one, as Swifties who attended the Lover Secret Sessions revealed "Soon You'll Get Better" was going to pack a punch. But they definitely didn't expect it to hit this hard. Damn, Taylor. You really did that.

In the song, Swift seems to sing about her mother's illness in a way that's meant to give her hope that one day soon, she won't be sick anymore.

The song starts off with Swift saying she worships her mother's medicine for helping her get better.

The buttons of my coat were tangled in my hair / In doctor's office lighting, I didn't tell you I was scared / That was the first time we were there / Holy, orange bottles / Each night I pray to you / Desperate people find faith / So now I pray to Jesus too / And I say to you...

Then the chorus comes in.

Crying yet? Too bad, the second verse gets even more intense.

I know delusional when I see it in the mirror / You like the nicer nurses / You make the best of a bad deal / I just pretend it isn't real / I'll paint the kitchen neon / I'll brighten up the sky / I know I'll never get it / There's not a day that I won't try / And I say to you...

Then comes the bridge, which made me blubber.

This won't go back to normal, if it ever was / It's been years of hoping / And I keep saying it because / 'Cause I have to

The song then closes out with the chorus.

Oh, look, my box of tissues is empty.

The song really is gut-wrenching. Swift did what she does best with this one: take a feeling and articulate it with specific detail, while keeping the feeling universal. It's the kind of songwriting that made he fanbase so loyal to her in the first place. Swift is back on that good sh*t, but the inspiration behind this song is truly heartbreaking.