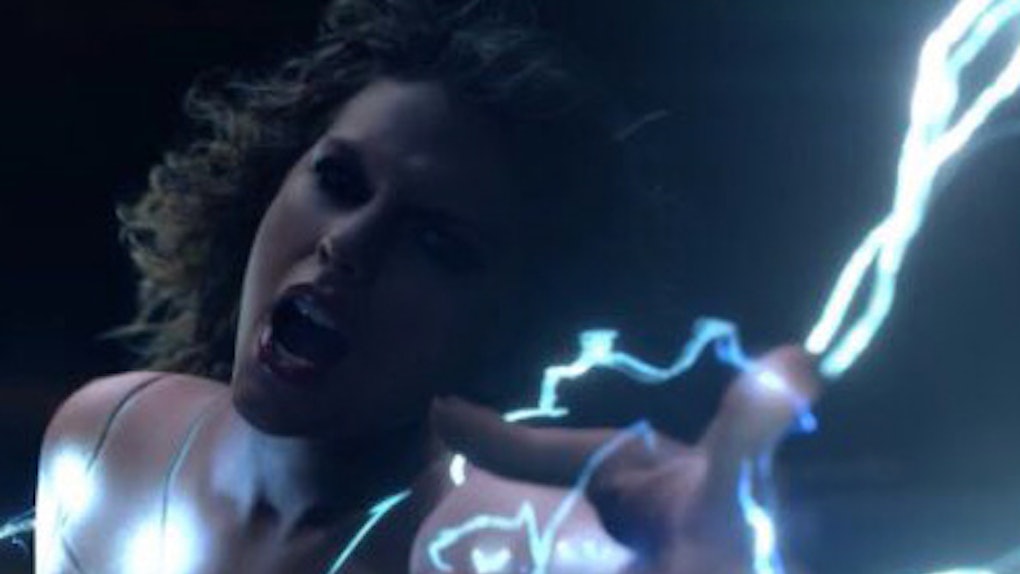 Taylor Swift’s “...Ready For It?” Video Throws Shade At Calvin Harris, According To This Fan Theory

Taylor Swift's "...Ready For It?" music video comes out tonight, Oct. 26, and safe to say fans are impatiently waiting for the arrival of the second music video from Swift's upcoming album, Reputation. The singer revealed on Instagram on Monday, Oct. 23, that the video would be coming out sometime tonight, although she didn't say what time, so we'll all just be waiting by bated breath, I guess. Fans have their own theories about what the video will be about, but is the "...Ready For It?" music video about Calvin Harris? Some Swifties have a theory that says it is.

The previews Swift posted on Instagram hint at a seriously intense music video. Swift is seen in a nude bodysuit in one part of the video, and she's getting praise from fans who think this is her reclaiming her naked body after Kanye West had a naked wax figure of her featured in the "Famous" music video. Because of that, lots of people think the video is going to be throwing shade at Kanye West like "Look What You Made Me Do" did, but other fans think we should be paying attention to a different detail in the clips.

According to some Twitter users, Swift's use of lightning in the previews hints at something bigger.

Remember the logo for Calvin Harris and Rihanna's "This Is What You Came For"? (Also, don't forget Taylor Swift was one of the writers of the song, but she wrote under a false name.) Well, some fans are of the opinion that Swift's use of a similar color scheme and the heavy use of lightning is her throwing shade at her ex. Swift and Harris had just broken up when the world found out Swift had helped write the song, and it caused a little drama. So that's probably why fans think Swift is going to shade Harris in the "...Ready For It?" music video.

"This Is What You Came For" has another tie to Swift outside of the writing credits.

The logo for "This Is What You Came For" — you know, the one we were literally just talking about because of the lightning — is actually a picture of a jacket Taylor Swift wore to Coachella 2016. Yup, the logo was basically a giant patch on the back of a black bomber jacket Swift was pictured wearing at Coachella last year. She posted a picture of herself wearing the jacket, but since the old Taylor is dead, it got deleted from her Instagram when she wiped it all clean leading up to the release of "Look What You Made Me Do." Considering all of this, I wouldn't be surprised if Swift did throw some shade at her ex. But then again, I would be pretty surprised, seeing as the "...Ready For It?" lyrics are obviously about someone she's currently with. It's more of a sexy love song than it is a "Look What You Made Me Do" petty track.

The "...Ready For It?" lyrics are most definitely about having feelings for a new person. In the second verse, Swift sings,

Me, I was a robber first time that he saw me

Stealing hearts and running off and never saying sorry

But if I'm a thief, then he can join the heist

And we'll move to an island-and

And he can be my jailer, Burton to this Taylor

Every lover known in comparison is a failure

I forget their names now, I'm so very tame now

Never be the same now, now

In the chorus, she sings,

You should see the things we do, baby

I know I'm gonna be with you

So I take my time

Are you ready for it?

Honestly, based on the "...Ready For It?" and "Gorgeous" lyrics (Swift literally sings "I got a boyfriend, he's older than us. He's in the club doing I don't know what" in the song), I would dare to say these songs are more likely to be about Swift developing feelings for someone new while she was still dating Calvin Harris and less about her throwing shade at Harris. Was it Tom Hiddleston? Was it Joe Alwyn? F*ck if I know, but I don't think this particular T. Swift song is about an ex.