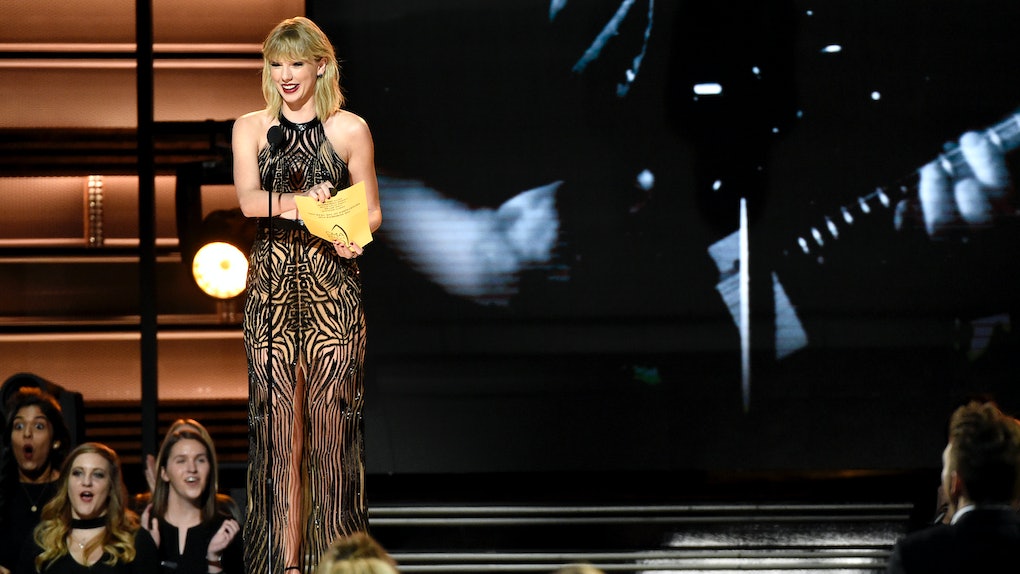 RED ALERT, Swifties, we are mere WEEKS away from a new Taylor album, and, TBH, I'm not sure I'm fully prepared. That's right, after an excruciatingly long break from the spotlight, Ms. Swift is back to grace us with an entirely different look and sound. Much to all of our surprise, our girl got dark... real dark. Indeed, so far, the first two singles off of her forthcoming studio effort, Reputation, have shown off a much edgier side to our fave pop icon, but the lyrics to Taylor Swift's new song "Gorgeous" really take the cake and display just how different the "new" Taylor is.

Earlier today Tay Tay, aka the Queen of social media, took to her social accounts to share with her millions of followers a new sound clip and song title from her album. The star posted a video with the word "Gorgeous" written in white letters (in her now signature Reputation-era font) over a purple background. The video features a short, eight-second clip of her newest release, with some lucky-ass baby singing the word "Gorgeous." Naturally, Swifties across the globe were running for their oxygen tanks, but that clip is nothing compared to the actual song.

The song starts off with Swift singing:

You should think about the consequence

Of your magnetic field being a little too strong

And I got a boyfriend, he's older than us

He's in the club doing I don't know what

You're so cool it makes me hate you so much

Whiskey on ice, sunset and vine

You ruin my life, why not be in mine?

She continues in the chorus:

I can't say anything to your face

'Cause look at your face

But what can I say?

That I'm talking to everyone here but you

And you should think about the consequence

Of you touching my hand in the darkened room

If you've got a girlfriend, I'm jealous of her

But if you're single that's honestly worse

'Cause you're so gorgeous it actually hurts

Ocean blue eyes looking in mine

Cue the chorus again. She sings in the bridge:

Guess I'll just stumble on home to my cats

Alone, unless you wanna come along, oh!

The song ends with one more chorus and this outro:

As exciting as a new album is, it's no secret that Taylor has been under fire since the announcement of her new era and the release of her first two singles off Reputation. Indeed, the singer has caught backlash from the media (surprise, surprise) for one of her song's sonic similarity to some of Kanye West's past music, as well as for her striking likeness to Beyoncé's "Formation" video in her own "Look What You Made Me Do" video.

Whether or not these similarities are intentional isn't clear, but let's not forget this is Taylor Swift we're dealing with. In other words, her music pulls meaning from her personal life, everything is calculated, and nothing is an accident.

Given Taylor's propensity for using her personal experiences as ammunition in her music, it's no surprise Reputation is said to "chronicle [Taylor's] feuds" with major A-listers like Katy Perry, Calvin Harris, Kim Kardashian, and, obviously, Kanye West. Indeed, according to a Swift source in Us Weekly, Taylor's chronicling of her high profile feuds "will be across multiple songs, somewhat cryptically, but also obvious.”

I guess all that's left to do now as we wait in patience for Reputation is to muse over who or what "Gorgeous" might be about. Remember: This is Taylor we're talking about, so everything means something. Happy hunting, Swifties.

Reputation comes out on Friday, Nov. 10.