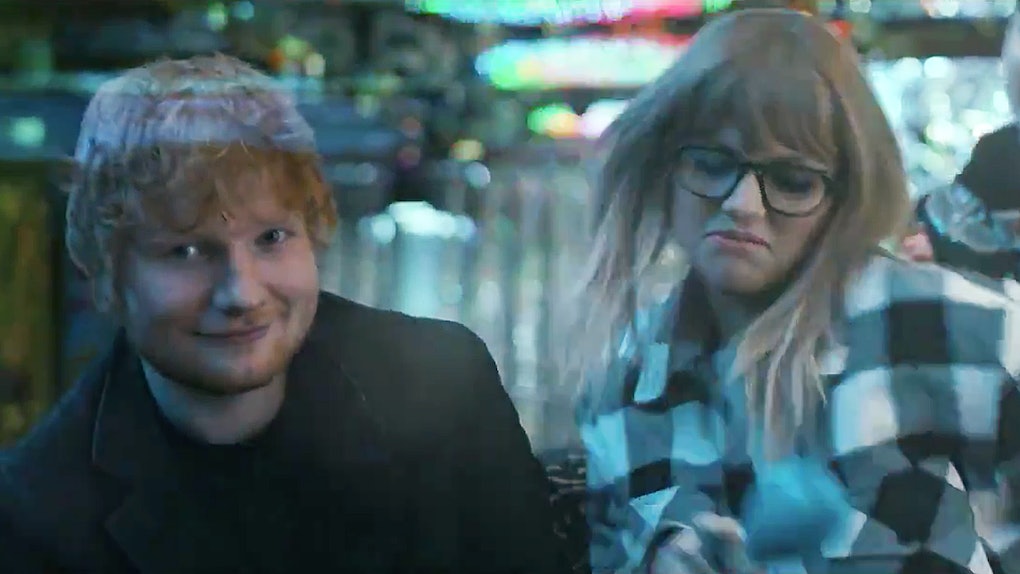 Taylor Swift released Reputation in November after months and months of teasing us with singles and music videos. Once Reputation was actually dropped on Nov. 10, all our lives seemingly went back to normal — with the addition on an entire album full of bops to enjoy. However, Swifty just rocked our world again when she announced on Jan. 11 that she was dropping a star-studded "End Game" music video at midnight. Just like the Fresh Prince of Bel-Air, my life got flipped turned upside down. Obviously, it was amazing and fans can't stop talking about the different locations, fun party scenes, and Swift's overall badassness. There is one detail that Swifties couldn't help noticing — Taylor Swift's rainbow dress in the "End Game" music video.

Swift rocked a dress with a very similar rainbow pattern when teasers for Reputation first started to be released. During the video, Swift sports more outfits than I have in my entire closet, so it's interesting we would be seeing double of something. The rainbow dress that Swift is wearing during her party scenes in London is very similar to the one she wore when she first started teasing Reputation. Was this a clue all along?

The music video included appearances from Future and Ed Sheeran, who both collaborated on the song with Swift. "End Game" fits perfectly with the rest of the sultry and poppy tracks on Reputation, but it's definitely a first for Swift for many different reasons. This was the singer's first song featuring rapper Future. The way Swift went about releasing Reputation and the three music videos so far is unlike anything she's ever done before, as well. Future and Ed Sheeran fit so perfectly in the song, it's hard to believe the three don't make up some sort of hip-hop-pop band.

The song begins with Swift singing, but Future joins in early on. Future's lyrics read:

Ed Sheeran makes his appearance later in the song. His voice is smooth as butter (as per usual). Sheeran sings,

I'm loving Swift's new vibe, AND I WANT MORE MUSIC VIDEOS. "End Game" is the third video to come from the album behind "Look What You Made Me Do" and "... Ready For It?" All three have the same kind of look and lighting, so maybe there's a theme happening here? Knowing Swift, we'll just have to wait and see.