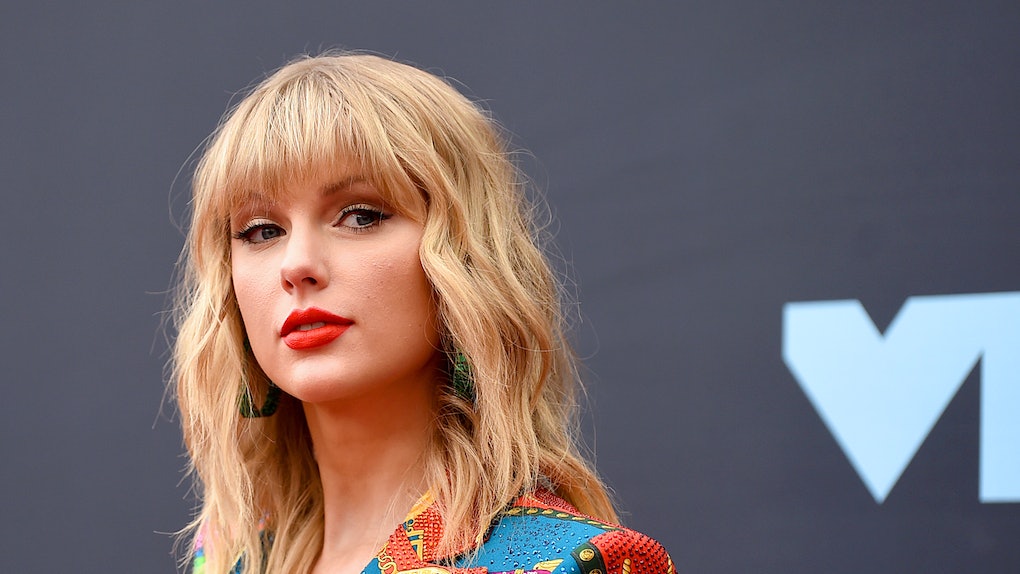 If there's one thing that's clear at the VMAs this year, it's that everything Taylor Swift touches still turns to gold. Straight off the release of her brand new album Lover, the pop star opened the show and took home two major awards for her "You Need To Calm Down" music video. As she accepted the award for Video of the Year, Taylor Swift's Donald Trump dig at the VMAs showed she's getting more political than ever. Girl knows what she believes in, and she won't stay quiet any longer. It was a distinctly powerful moment in the midst of a super fun and exciting night.

Swift brought her entourage onstage to accept the award, including the video's co-executive producer Todrick Hall. She first reminded everyone that Video of the Year is a fan-voted award, which means many people believe in the video's message of equality. Then, Swift took a moment to remind the audience of the Equality Act, for which she created a petition earlier this year to raise awareness for LGBTQ rights and to fight workplace discrimination.

"There still is a petition for the Equality Act, which basically just says we all deserve equal rights under the law," Swift explained. "I want to thank everyone who signed that petition because it now has half a million signatures, which is five times the amount that it would need to warrant a response from the White House." She then pantomimed checking her watch as the crowd cheered.

While Swift never mentioned Trump by name, the subtle call-out was perfectly in line with her song's message. "YNTCD" is an anthem about love and acceptance, a clapback against internet trolls and hateful rhetoric. Swift even shouted out GLAAD in the lyric video.

The past year marks a whole new era for Swift, as she has finally decided to take a more overtly activist stance in public. The artist stayed relatively quiet on all things political until October 2018, when she posted on Instagram to express support for two Democratic Congressional candidates in Tennessee. "I always have and always will cast my vote based on which candidate will protect and fight for the human rights I believe we all deserve in this country," Swift wrote in the post. "I believe in the fight for LGBTQ rights, and that any form of discrimination based on sexual orientation or gender is WRONG."

Then, she made her thoughts on inclusion extremely clear with the release of the "YNTCD" video on June 14. The video featured LGBTQ trailblazers like Ellen Degeneres, Laverne Cox, RuPaul, and the cast of Queer Eye. It was the perfect Pride month anthem in the midst of a volatile political era.

The 2019 VMAs have been full of big moments, from Missy Elliott's groundbreaking Video Vanguard performance to that super-steamy duet by Shawn Mendes and Camila Cabello. It was a night to celebrate the best of the entertainment industry, and Swift's dig at the White House was a great reminder of the future she wants to fight for with her music.