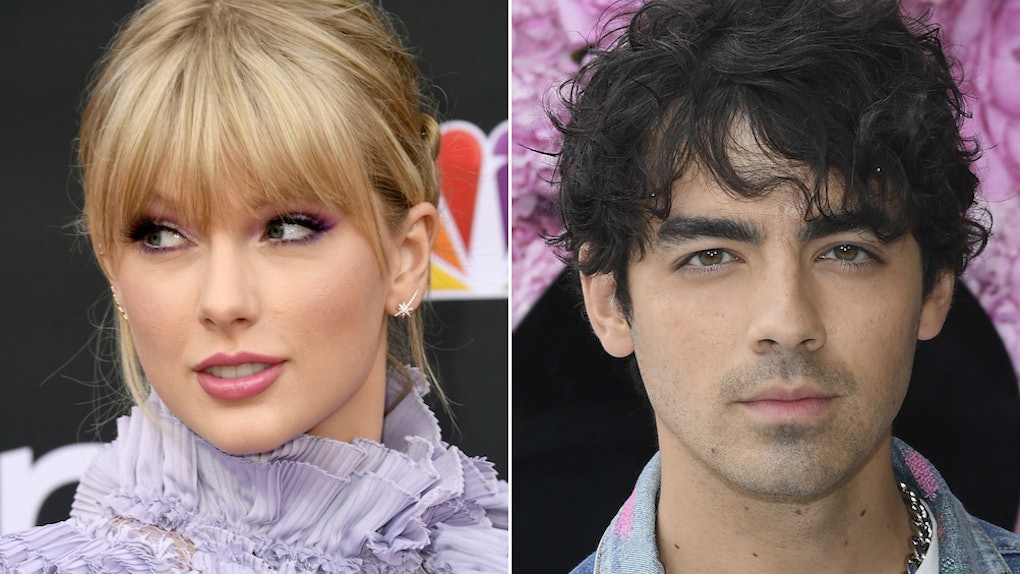 Taylor Swift is taking back some of her old shade. The "ME!" singer appeared on The Ellen DeGeneres Show for the first time in a long time and reminisced with the host about a previous appearance she made back when she was still exclusively making country music. In a mildly-shocking turn of events, Swift not only addressed one of her ex-boyfriends, but she also took back some shade she threw at one of them. Which ex, you ask? None other than Joe Jonas. Taylor Swift's comments about Joe Jonas dumping her a decade after she blasted him for it on Ellen in 2008 are a mature move.

In the interview aired on Wednesday, May 15, Ellen DeGeneres had Swift do her "Burning Questions" segment, where the two of them sit in a set of chairs and answer a round of rapid-fire q's. When you answer, you hit the big red button in front of you. The first thing DeGeneres asked was if Swift could reveal the title of her next single.

"I can't tell you that. That's crazy!" Swift said back. Then DeGeneres pressed a little further, asking her to sing some of it.

Then Swift was asked what her favorite TV show is (Killing Eve, Game of Thrones, Downton Abbey, and Queer Eye were her responses). Then came the question about her teen years.

"What is the most rebellious thing you did as a teenager?" DeGeneres asked.

"I was 18, yeah," she continued. "We laugh about it now, but that was mouthy, yeah, some teenage stuff there."

Let's take it back to that moment, shall we?

Swift was on the show back in 2008 to promote the Fearless album when DeGeneres asked her to comment on who the songs on the album were about. This was around the time Swift and Jonas were reportedly dating, so DeGeneres put a picture of Swift and Jonas up on the screen behind them.

"There's one [song] that's about that guy, but that guy's not in my life anymore, unfortunately. That's ouch," she said, revealing a few moments later that the song was titled "Forever and Always." (A sarcastic title, clearly.)

"We haven't talked since, but you know what, some day I'm gonna find someone really, really great who's right for me," she continued. And here's when she poured her tea piping hot.

"When I look at that person," she said, "I’m not even going to remember the boy who broke up with me over the phone in 25 seconds when I was 18."

This was Ellen's face at that moment.

Yeah, safe to say she put Joe Jonas on blast a bit there! But in her new interview with DeGeneres, she admits that was some rebellious-teen behavior right there that she probably could have refrained from. DeGeneres said she doesn't even remember that moment happening, but let's be real... she does.

Taylor Swift is taking back her shade! You see that? That's growth.