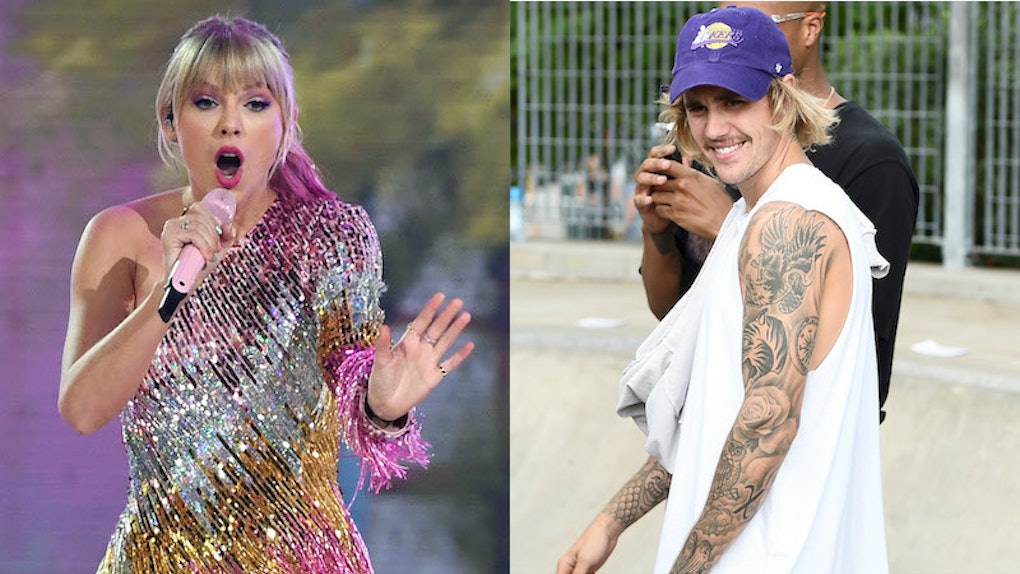 It's no secret Taylor Swift and Justin Bieber have a complicated relationship now, but OG fans know that back in the day (like a decade ago in 2009), the two stars used to be really good friends. It's true. But that's all history now, and Taylor Swift and Justin Bieber's quotes about each other reveal exactly how their relationship began to crumble.

Let's recap the most recent events. On June 30, Justin Bieber's manager, Scooter Braun, acquired Swift's old record label, Big Machine, along with Swift's entire music catalog. In response to the news, Swift accused Braun of bullying her for years, and said, "Never in my worst nightmares did I imagine the buyer would be Scooter. Any time Scott Borchetta has heard the words ‘Scooter Braun’ escape my lips, it was when I was either crying or trying not to. He knew what he was doing; they both did." Bieber defended Braun and took his side. Not only that, but he also blasted Swift on social media and accused her of encouraging her fans to bully Braun. Yikes. But Swift and Bieber's relationship began to fall apart long before their current feud.

Um, remember how Taylor Swift is BFFs with Justin Bieber's ex-GF Selena Gomez? Their relationship was pretty complicated, too, so it makes sense that Swift and Bieber aren't as close as they used to be.

But how has Swift and Bieber's relationship changed, exactly? I'll let Taylor Swift and Justin Bieber's quotes about each other speak for themselves.

In 2009, Swift embarked on her Fearless Tour. While in London, she invited Bieber to be her opening act at Wembley Arena. Bieber posted a video about the show and wrote, "So the amazing Taylor Swift invited me to join her in the UK at Wembley Stadium and Manchester Arena."

During Bieber's Wembley performance, he broke his foot, but kept on performing anyway. The fact he continued his performance really made an impression on Swift. In that same video on Bieber's YouTube channel, Swift said, "All joking aside, he broke his foot on stage, in front of 11,000 people and finished the song," and encouraged everyone in the room to give Bieber a round of applause. They ended the video with a hug and Bieber even told Swift to have a "great Thanksgiving."

WHEN THINGS STARTED TO TAKE A TURN:

Justin Bieber and Selena Gomez began dating in 2010, but their relationship didn't really change Swift and Bieber's friendship. In fact, it only seemed to make it stronger. From 2011 to 2013, the two stars met up with one another at several award shows, and Swift even invited Bieber to perform with her during her Speak Now tour.

But that all changed in 2013. Bieber and Gomez broke up and then got back together, and that didn't seem to sit well with Swift. At the 2013 Billboard Music Awards, Swift actually stuck her tongue out as Gomez and Bieber greeted each other backstage.

While doing press after the show, an interviewer asked Swift, "What do you think of Justin Bieber winning the Milestone Award?" Seems like a pretty innocent question, but Swift's response started some major drama. Instead of answering, Swift replied, "Can we have another question?"

Ouch. Doesn't seem like that's something a friend would say, does it?

From 2013 onward, Swift and Bieber seemingly haven't interacted much. That is... until all the Scooter Braun drama happened.

On June 30, after it was announced that Braun acquired Big Machine Records, Taylor Swift shared an open letter on Tumblr.

Some fun facts about today’s news: I learned about Scooter Braun’s purchase of my masters as it was announced to the world. All I could think about was the incessant, manipulative bullying I’ve received at his hands for years.

In the same letter, Swift also accused Scooter Braun of having his "clients" (aka Justin Bieber and Kanye West) bully her:

Like when Kim Kardashian orchestrated an illegally recorded snippet of a phone call to be leaked and then Scooter got his two clients together to bully me online about it.

As a response, Bieber went online to reveal some info about his and Swift's relationship over the years. He said, "As the years have passed we haven’t crossed paths and gotten to communicate our differences, hurts or frustrations."

He then questioned Swift's motives for blasting their drama out on Tumblr, writing: "What were you trying to accomplish by posting that blog? seems to me like it was to get sympathy u also knew that in posting that your fans would go and bully scooter."

Bieber then admitted that although he and Swift aren't on good terms, he still cares about her:

Anyway, One thing i know is both scooter and i love you. I feel like the only way to resolve conflict is through communication. So banter back and fourth online i dont believe solves anything. I’m sure Scooter and i would love to talk to you and resolve any conflict, pain or or any feelings that need to be addressed. Neither scooter or i have anything negative to say about you we truly want the best for you.

Swift didn't directly respond to Bieber's post, but her Tumblr "likes" did all the talking for her. Swift liked a comment that explained the possible reason she hasn't contacted Bieber in so long, and maybe why she won't be planning to do so anytime soon, either. The comment read:

More like this
Victoria Beckham's Instagram About Justin Bieber's Crocs Is Brutally Shady
By Daffany Chan
Is Olivia Rodrigo's "Good 4 U" About Joshua Bassett? Fans Are Convinced
By Michele Mendez
Prince Harry's Secret Dates With Meghan Markle At The Supermarket Sound Like A Rom-Com
By Brandy Robidoux
Stay up to date