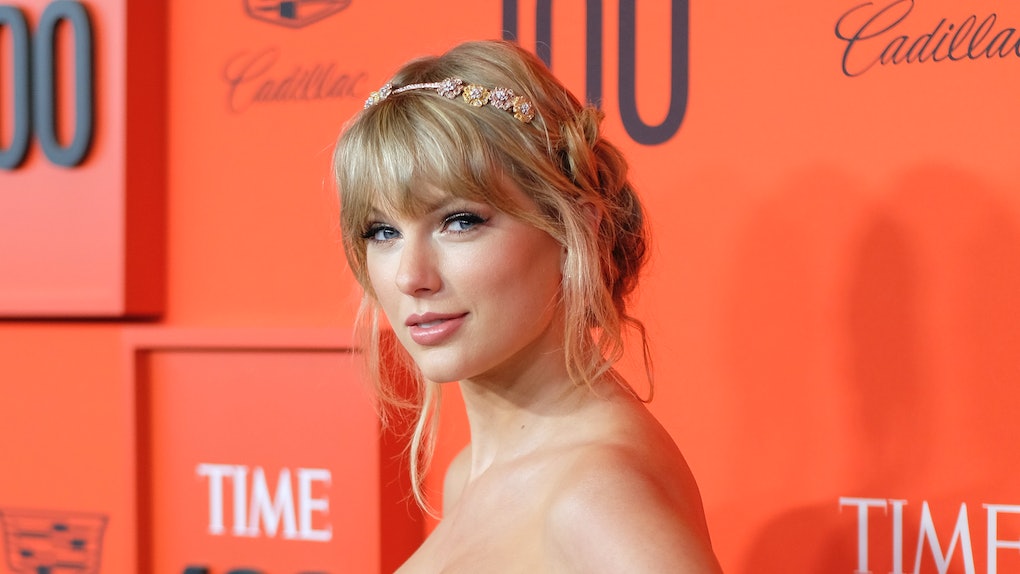 Taylor Swift, you sneaky, sneaky, celebrity, you. The Queen of Clues is upping her game to a whole new level according to a press release from Spotify. According to the release, Taylor Swift is leaking her own Lover lyrics on Spotify ahead of the full Lover album release on Friday, Aug. 23, and Swifties can't believe it. Hang on to your seats, fans, because there's a lot more, too.

By now, you know Swift's favorite thing to do is send her fanbase on virtual and physical scavenger hunts in efforts to discover and unleash new music and projects. Lover started with a giant butterfly mural designed to announce her first single off the record, "ME!". This resulted in Swift snapping photos in real life with fans in Nashville, Tennessee. However, before the physical art, fans have seen the clues game time and time again in Swift's music videos and on her social media accounts. This time, all the secret, juicy goods surrounding never before seen or heard Lover lyrics are going to appear via her Love, Taylor: The Lover Enhanced Album playlist on Spotify.

Beginning on Tuesday, Aug. 20, a new lyric reveal will be dropped on the playlist to "bring the lyrics to life" in a virtual love letter from Swift herself. The playlist contains a video message from the "You Need To Calm Down" singer along with a handwritten note to fans and the four songs we already know and love from Lover, including: "ME!," "You Need To Calm Down," "The Archer," and "Lover." The special playlist also includes 11 of Swift's favorite love songs.

The first lyrics teased on Swift's special playlist are, "I can't talk to you when you're like this / staring out the window like I'm not your favorite town / I'm New York City!"

You can listen to Swift's enhanced Lover playlist below:

While fans wait for more lyrics, fans are deducing that Swift has already teased some lyrics on her Instagram. For example, there is one photo she shared from a shoot with Vogue that shows her performing a high kick in a blue dress. The caption reads, "My heart’s been borrowed and yours has been blue. All’s well that ends well, to end up with you. 💙" Another black and white photo had the accompanying caption, "I’d be a fearless leader. I’d be an alpha type." (Hm... sure sounds like Taylor Swift lyrics to me.)

Fortunately, all of the goods are almost here. After three days of love letters, the album will arrive in its totality, wrapping up yet another summer of Swift. Her transformation from the dark slithering snake that rocked the concert stage in her Reputation era to the new candy-coated butterfly she is today will finally be complete. Based on the way this woman works, Swifties can almost definitely anticipate a stadium tour to follow, though nothing has officially been announced, yet. (However, I bet if we look closely enough we'll see clues about an impending tour popping up very, very soon!)

In the meantime, head over to that Love, Taylor: The Lover Enhanced Album playlist and go to town devouring the new lyrics. Thanks, as usual, Tay-Tay!

More like this
TikTok’s Taylor Swift Era Trend Documents Your Throwback Swiftie Evolution
By Rachel Chapman
Which Album Will Taylor Swift Re-Release Next? Her Hints Have Fans Shaking
By Brandy Robidoux
What Does Taylor Swift's Vault Door Video Mean? Fans Are Decoding It
By Cianna Garrison
Stay up to date