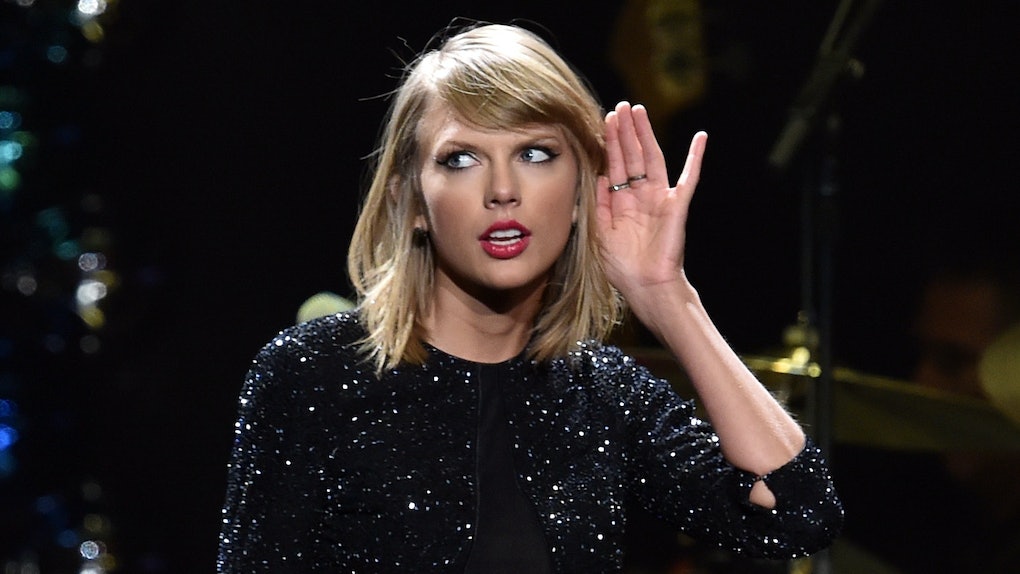 Taylor Swift Didn't Talk Politics Because She Didn't Feel "Informed," Which Is So Relatable

While Taylor Swift received widespread praise for her voyage into politics in 2018, she also met a lot of criticism, with many wondering what took her so long to speak out in such a charged political climate. The "Look What You Made Me Do" singer had famously stayed away from the topic until around the November 2018 midterm elections, when she publicly endorsed two candidates running for offices in Tennessee — but she apparently stayed away from politics for a really relatable reason. Apparently, Taylor Swift didn't talk politics because she didn't feel "informed" enough to do so. Fair enough.

The revelation came in an essay Swift penned for Elle magazine on March 6, in which she shared 30 things she's learned ahead of her 30th birthday. Swift wrote that she learned the importance of having a voice in politics, noting she previously hadn't felt informed enough about the political system and the way that it works, and that she only spoke out once she felt comfortable enough to do so. She wrote:

I took a lot of time educating myself on the political system and the branches of government that are signing off on bills that affect our day-to-day life. I saw so many issues that put our most vulnerable citizens at risk, and felt like I had to speak up to try and help make a change. Only as someone approaching 30 did I feel informed enough to speak about it to my 114 million followers. Invoking racism and provoking fear through thinly veiled messaging is not what I want from our leaders, and I realized that it actually is my responsibility to use my influence against that disgusting rhetoric.

It was a big admission from the pop star, who endorsed two Tennessee Democrats ahead of the 2018 elections, Phil Bredesen, who ran for Senate, and Jim Cooper for the House of Representatives. Cooper won his race, while Bredesen was defeated by Republican Marsha Blackburn.

Though it might have taken her time to speak out, Swift concluded her comments in the Elle essay by stressing her intention to do more politically. "We have a big race coming up next year," she said.

Am I wrong or are Swift's comments relatable AF? With so many laws and decisions being made by the day and all that has happened in the past, it is hard to keep up — especially for someone like Swift, who has seemingly been on-the-go since she was a teenager. And she's not alone — according to a HuffPost/YouGov poll from October 2018, about 38 percent of people ages 18-29 thought that only people who were "well-informed" about elections should vote. Add to that the fact that only 20 percent of that age group thought that they were "very well informed," and you can see the issue.

Of course, there's no test required to permit you to be involved in politics, and everyone has the right to their opinion, no matter how much research they've done. But if you want to be informed first, there's some easy ways to get started. The first step is knowing your local legislators and politicians. If you put in your address here, you can find a list of your local officials. When it comes to elections, resources like Ballotpedia can be a great starting point — you can look up your election, including the candidates and their stances, what measures might be on your ballot, or even take a peek at a sample ballot, and have an idea of how you want to cast your vote in an easy-peasy 15 minutes.

If you want to go further, you can also get in touch with your elected officials to speak on issues you support or things you'd like to see done in your community. (See this Twitter thread for help on reaching out.) The phone will probably be your best bet, but you can also try attending town hall meetings to make your voice heard. If you need an idea of issues to think about, this is a good resource. CNN actually has a list of 25 ways you can be more politically engaged, and whether you lean right or left, that's a real help.

The important thing to remember is that everyone has to start somewhere. Whether you're a teenager or heading into your 30s, it's never too late to get involved — and Swift is proof of that.