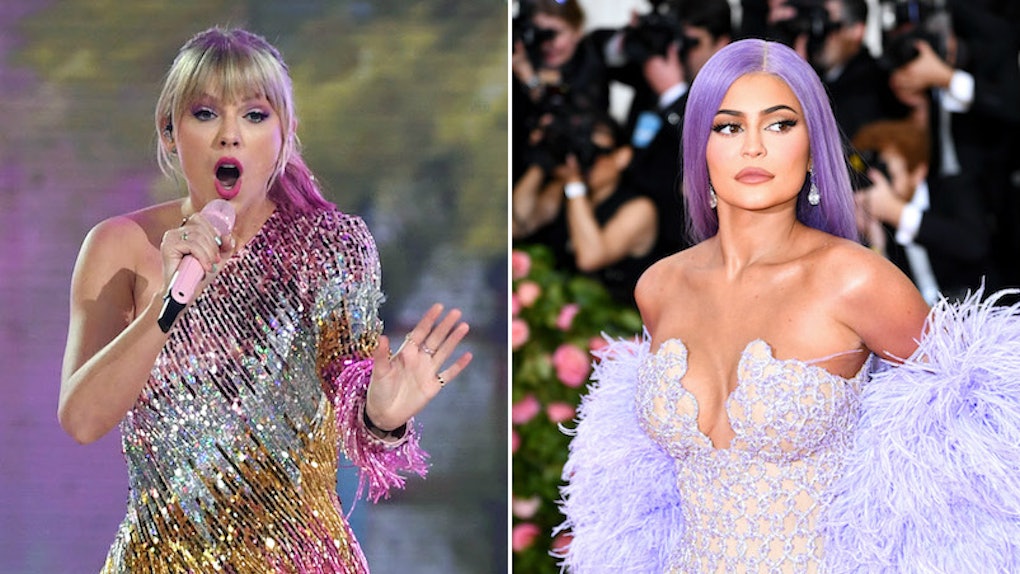 Well, well, well. What do we have here? If it isn't the ol' wealthiest celebrity switcharoo. Forbes just released their top 100 richest celebrities list, and if you can even believe it, someone passed Kylie "Billionaire" Jenner. And, not just anybody. I'm talking about Taylor I-would-very-much-like-to-be-removed-from-this-narrative Swift — arch-nemesis of everything Kardashian/Jenner. According to the new report, Taylor Swift beat Kylie Jenner as the highest-paid celebrity despite Jenner's extremely visible wealth. Swift pulled in nearly 15 million more than Jenner when all was said and done this past year, putting her in the No. 1 spot and lapping the cosmetics mogul. (Oh yeah, Swift also beat out Kanye Imma-let-you-finish West, who came in at the No. 3 spot. Ha.)

If you listen very, very hard, you can probably hear snakes hissing in the distance.

Taylor Swift reportedly raked in $185 million pretax over the past year, which is a whopping 131% growth from the $80 million she reportedly made in 2018. This was mainly thanks to her Reputation tour, which Forbes notes grossed $266.1 million domestically and $345 million overall. This made it the highest-grossing U.S. tour since Billboard began keeping track nearly 20 years ago.

Meanwhile, while Jenner does own 100% stake of Kylie Cosmetics, a company that is reportedly worth $900 million, Forbes has her coming in at second place with an estimated earning of $170 million this year. None of this literally added up to me until I found this explanation of how these rankings are calculated from Forbes 2018 Celebrity 100 list:

The Forbes global Celebrity 100 ... ranks "front of the camera" stars around the globe using their pretax earnings from June 1, 2017 through June 1, 2018, before deducting fees for managers, lawyers and agents. Forbes figures are based on numbers from Nielsen, Pollstar and IMDB, SoundScan, BookScan, ComScore and NPD, as well as interviews with industry experts and many of the stars themselves. The result is the definitive index of who's making what in the global business of fame.

I'm trying hard not to make a "mo' money mo' problems" reference, but it feels like this article is just begging for it, doesn't it? So, mo' money, mo' problems!

Look, whatever. The point is: these women are rich, baby. What they might lack in privacy, autonomy, and sleeping in on Sundays, they make up for in actual dolla-dolla bills. Guess that's the price you pay to be a major celebrity. (OK, enough with money puns.)