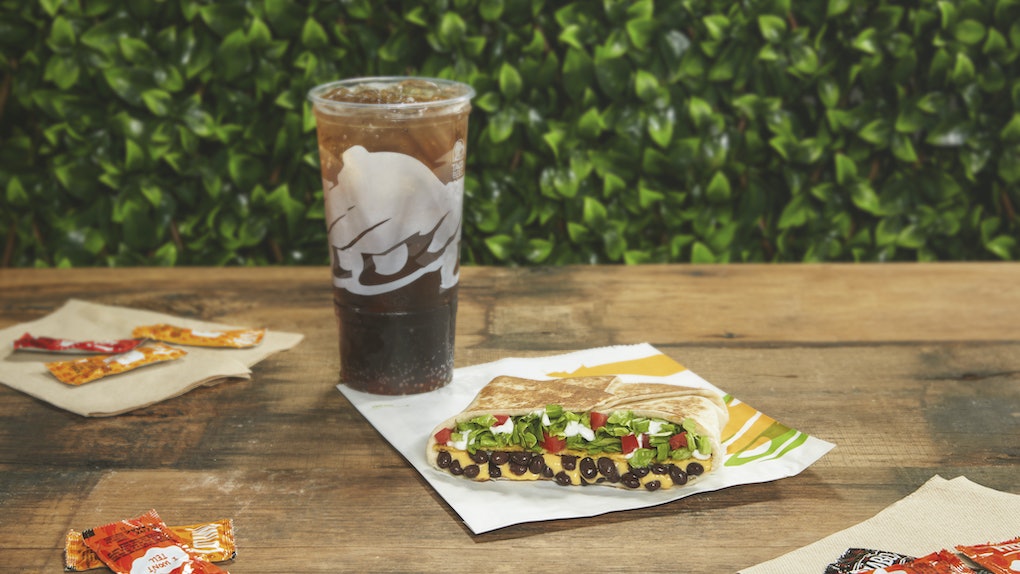 Just months after Taco Bell first announced that several meat-free options were coming to its menu in 2019, everyone's favorite Tex-Mex chain has delivered. The fast food giant is testing new veggie-forward versions of two of its popular meals, and I'll be the first to be the first to say that Taco Bell's Vegetarian Crunchwrap Supreme and Quesarito look like something that even meat-eaters will want to jump on. Here's what to know about what's on the company's first vegetarian menu.

Back in January, Taco Bell revealed that it was expanding its meat-free repertoire in a press release. TBH, I've always thought of the chain as a vegetarian-friendly spot: According to its website, Taco bell has more than 8 million vegetarian combinations on its menu and is the only fast food chain that's certified by the American Vegetarian Association. With high-protein vegetarian ingredients like vegan refried beans and black beans, as well as menu items like the 7-Layer Burrito and the Power Menu Burrito-Veggie to choose from, it's easy for vegetarians and "flexitarians" alike to enjoy a meat-free meal without feeling like they're compromising on flavor or ingredients.

TBH, the veg-forward options were pretty overwhelming (after all, there are enough to customize a new meal every day for nearly 20,000 years, in case you were wondering), so it was a helpful — albeit not exactly groundbreaking — touch when the chain decided to put together a set vegetarian menu to help some of its customers order while keeping their dietary restrictions in mind.

However, when the Tex Mex chain teased that "some amazing new vegetarian menu items" would be rolling out in the coming months, that definitely caught my attention. IMHO, Taco Bell has some of the most innovative menu items in the fast food game, and I was pumped to learn that the Crunchwrap Supreme and the Quesarito are getting a meat-free makeover for the company's new vegetarian menu.

Starting on Thursday, April 4, Taco Bell will begin testing out its first vegetarian menu (which only contains ingredients certified by the American Vegetarian Association) at storefronts in Dallas per press materials. The good news? The fact that T-Bell is testing out Vegetarian Crunchwrap Supreme and Quesarito this early in the year means that it's likely the rest of the country will get a taste of these goodies sooner rather than later. The bad news? In the meantime, you can only sample these bad boys in Dallas.

According to press materials, the veg-friendly Crunchwrap Supreme and Quesarito are pretty similar to the ones that meat eaters have been enjoying for years, except for the fact that the meat has been subbed out in favor of savory black beans.

With plenty of hearty protein and gooey cheese up for grabs, these new additions promise to be a satisfying vegetarian option for lunches or dinners. Per the press release, Taco Bell will also be offering the customer-favorite 7-Layer Burrito on its menu if you're craving the familiar combination of fresh onions and tomatoes, refried beans, Mexican rice, lettuce, sour cream, and guacamole wrapped in a flour tortilla.

Again, if you happen to be in the Dallas area when these meat-free options drop on Thursday, I'd make some Taco Bell lunch plans and report back to the rest of us. As a consolation prize to the rest of us, the fast food retailer will be offering a small size of either its new Pepsi Zero Sugar and Mountain Dew Baja Blast Zero Sugar sips for free when customers order through Taco Bell's app through April 3.

It might only be Wednesday, but Taco Bell is definitely helping us live más and get over the mid-week hump in the tastiest way possible.