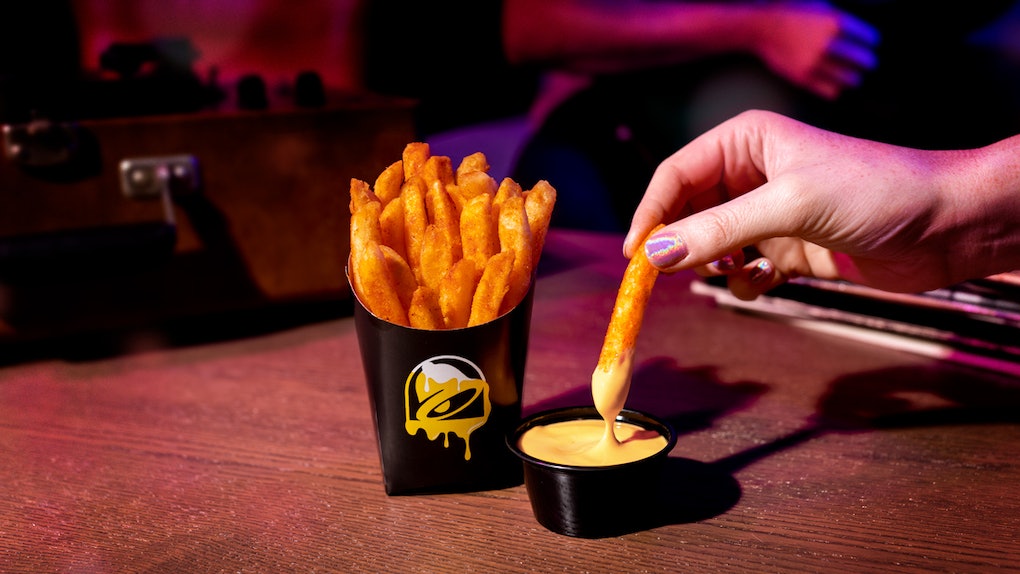 Taco Bell's Nacho Fries Are Returning In June 2019, So You Can Live Mas This Summer

Living más this summer is about to get a whole lot tastier. After a long absence, I'm happy to announce that Taco Bell's Nacho Fries are returning in June 2019 to upgrade your Tex-Mex spread — and they're just as delicious as you remember. Plus, the fast food chain is bringing back its fan-favorite product on the wings of a song and a movie trailer that are almost as unforgettable as the fries itself, so you can now belt out your love of Nacho Fries if the side has you feeling some kind of way this summer.

Since first making its initial debut back in January 2018, Taco Bell's Nacho Fries have gained somewhat of a cult following that's only been strengthened by the fact that the limited-edition item is never on the retailer's menu for long. Personally, it's my favorite thing to order at Taco Bell, and my tastebuds have always celebrated during its last three limited-edition appearances.

According to a Taco Bell press release sent to Elite Daily, these bad boys are heading back to Taco Bello locations as soon as Thursday, June 6, meaning that you can celebrate patio season by treating yourself to fries that have been "crisped to perfection, coated in bold Mexican seasoning, and served with a dippable side of warm Nacho Cheese sauce." TBH, I'm drooling a little just thinking about them.

Now that the beloved side is coming back for its fourth round, it's kind of fitting that it's making a grand entrance with a song and a movie trailer dedicated to its return, according to press materials

As Taco Bell fans know, the Tex-Mex chain likes to make a bit of an entrance every time it brings back its tangy and cheesy bites, and this one might just take the cake. The Nacho Fries are marking their return with a faux movie trailer and a song from Glee's Darren Criss that's all about customers' love of the beloved fries, and I have to admit it's all pretty catchy.

Once you're done humming along to the track, aptly titled "Chasing Gold," you can head to your local Taco Bell to get a side of Nacho Fries for $1.29 or up the ante with fries mixed with seasoned beef, sour cream, Nacho cheese sauce, and tomatoes for $2.49. There's also a bigger size called the Nacho Fries Bell Grand for $3.49 if you're feeling extra hungry.

While you can easily add some Nacho Fries to whatever entrée you're craving, the side will also be available as part of the $5 box, which comes with a Beefy 5-Layer Burrito, a Doritos Locos Tacos, and a medium soda. Basically, there's no shortage of ways that you can get your Nacho Fries fix handled this summer.

We’re excited to bring back such an adored menu item for our fans and, this time, fully immerse ourselves into the music space with "Chasing Gold." Our fans have come to expect these big budget trailers with every Nacho Fries launch and this time, we wanted to surprise them, adding a song as good as our Nacho Fries that they soon won’t be able to forget.

There's just one thing to keep in mind as you happily dig into the cheesy side: Like always, the Nacho Fries are only around for a limited-time, so I'd definitely make the most of it while they're still available.