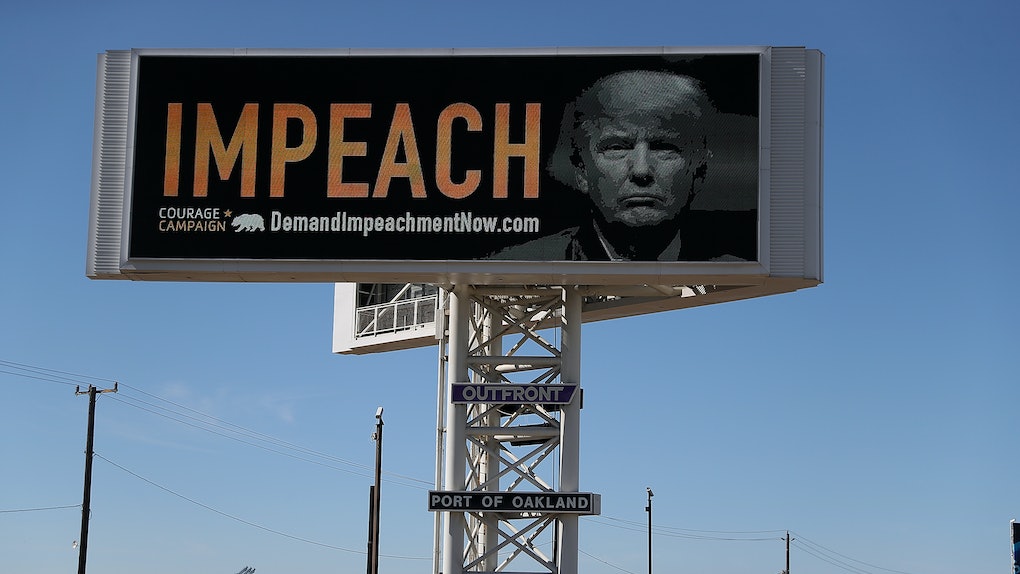 Support For Impeaching Trump Is At An All-Time High, New Poll Says

Earlier this month, President Donald Trump asserted that he had done more in his nine months in office than any other president in U.S. history. When he hasn't been golfing at Mar-a-Lago, he certainly has been busy undoing Obama-era legislation and making his own mark. However, a new national poll poll shows that American support for impeaching Trump is at a record high, so his nine months of accomplishments may be having a negative effect. According to a national poll by the Public Policy Polling (PPP), 49 percent of voters support impeaching him, compared to a 41 percent who do not support impeaching him.

The PPP has been tracking monthly records of voters in favor of impeachment, and this past month, ending on Oct. 31, marks the sixth month in which voters have been split nearly even on impeaching Trump. However, this month is the closest it's been to having a majority support Trump's impeachment.

What are we supposed to do with this information? Well, it appears that a small percentage of Trump supporters may be unwavering in their dedication to him, while a larger pool of Americans, that may or may not have voted for him, have a growing disfavor for him as president. It seems reasonable to assume that if this many Americans — and counting — do not want Trump to be president, something should be done. Unfortunately, popular belief is not grounds for impeachment, so no matter how many people dislike him, he will remain in office unless he is found guilty of some high crime.

If you're wondering if Trump is indeed impeachable, there are a few constitutional justifications for impeachment, other than being unfavorable. According to article 11, section 4 of the Constitution, a president can be removed from office if they are found guilty of treason, bribery, or other high crimes. You might be wondering (or hoping), if Trump is guilty of any of these things. He's not officially guilty, but there are a few people actively trying to convict and impeach him on these grounds.

Free Speech For People, a national non-partisan nonprofit, started a campaign called "Impeach Trump Now," which is trying to impeach Trump on the grounds of conflicts of interest relating to personal and international business. Two members of Congress, Democratic Representative Al Green and Democratic Representative Brad Sherman are trying to impeach of Trump on the grounds of "obstruction of justice" and "committing high crimes and misdemeanors," in relation to the investigation into Russia's involvement with the 2016 election and the firing of former FBI Director James Comey. The last one is Tom Steyer, a former hedge fund manager who launched a campaign called "Need to Impeach" to rally lawmakers into impeaching Trump because he "brought us to the brink of nuclear war, obstructed justice, and taken money from foreign governments."

These are just three of many campaigns that are gathering support in hopes of impeaching Trump, however, it is unclear whether any of them are making leeway in Congress and the House, which is a crucial part. No matter how many signatures fill up a petition — or how many polls show Trump's sinking approval ratings — the only way to remove him from office is through a Constitutional justification.