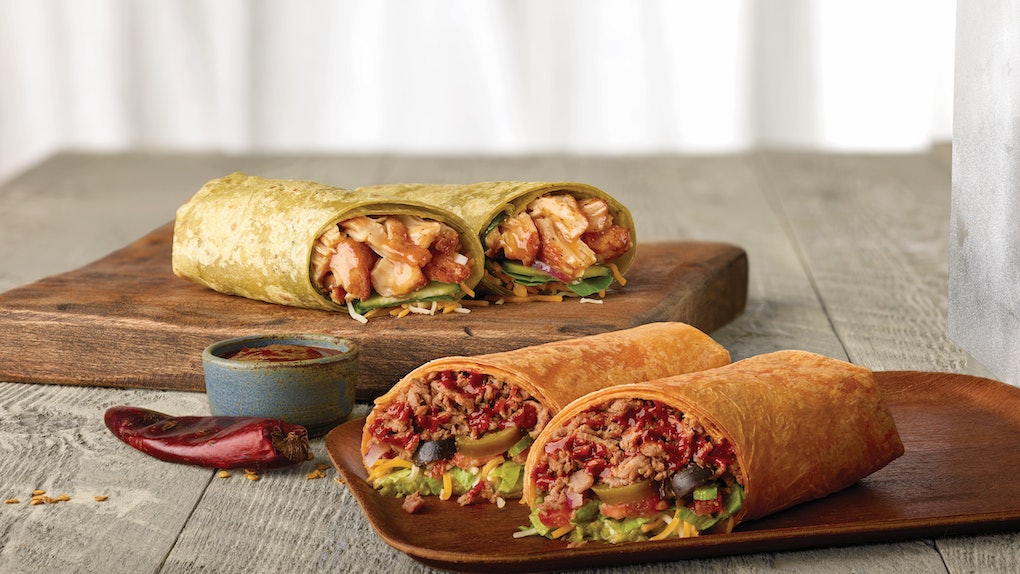 Subway is known for its 6-inch and footlong subs stuffed with endless amounts of whatever you want. But did you know that Subway sells wraps too? On Thursday, Feb 28, the fast food franchise is launching two new wraps, and Subway's New Signature wraps feature a guac-filled favorite and Thai-inspired goodness that you're definitely going to want to try. Turns out there isn't only one way to eat fresh at Subway!

First, let's talk big picture details: Subway's two new wraps will be filled with double the meat of a 6-inch sub, meaning double the flavor and double the protein, per a Subway press release. The concoctions will be available from Feb. 28 until April 24, 2019, so you have about two months to try them before the limited edition food leaves participating locations. I don't know about you, but I'll be running to the nearest Subway to try both of these.

Now, let's talk flavor. Subway's guac-filled sub, called the Sweet N’ Smoky Steak & Guac Signature Wrap, is made with a double portion of steak slathered in sweet Guajillo Mesquite Sauce. The wrap also contains jalapeños, freshly sliced tomatoes, green peppers, red onions, black olives, Monterey cheddar cheese, and to top it all off, a heap of guacamole, all wrapped in a tomato basil tortilla. What more could you want?

The second new wrap, the Thai-inspired Sesame-Ginger Glazed Chicken Signature Wrap is rolled up in a spinach wrap and loaded with a rotisserie-style chicken marinated in ginger-sesame glaze. It also contains shredded Monterey Cheddar, spinach, freshly-sliced cucumbers, and red onions for the perfect, refreshing flavor.

The two new wraps join Subway's long list of Signature Wraps, which includes a Chipotle Southwest Steak and Cheese Wrap, Turkey, Bacon, and Guac wrap, Meatball Marinara wrap, and Sweet Onion Chicken Teriyaki wrap. According to a press release, the launch of the two new wraps is a move by Subway to disrupt the current menu and introduce "bold combinations and exotic new flavors." Subway also announced a partnership with Tastemade last year for a "more contemporary food experience," per a Subway press release from August.

As part of this big-picture move to change the current offerings and create a bolder, more innovative menu, Subway released its Ultimate Cheesy Garlic Bread in December 2018, featuring a garlic butter spread with melted Parmesan and shredded mozzarella that customers could use to assemble their dream subs. Though the bread was only available until Feb. 27, 2019, it's one example of Subway's "rule-breaking" new recipes and flavors that join the ranks of the Sesame-Ginger Glazed Chicken Signature Wrap and Sweet N’ Smoky Steak & Guac Signature Wrap.

Whichever Signature Wrap flavor you prefer, there's no denying that Subway's got something for everyone. With a full selection of wraps, salads, subs, and desserts, the fast food chain has more options than ever before and is closing in on its fast food competition. Hopefully we can look forward to more flavors in the future as Subway's menu initiatives continue and the company's partnership with Tastemade grows over time. OK, now I'm off to try that guac-filled wrap!