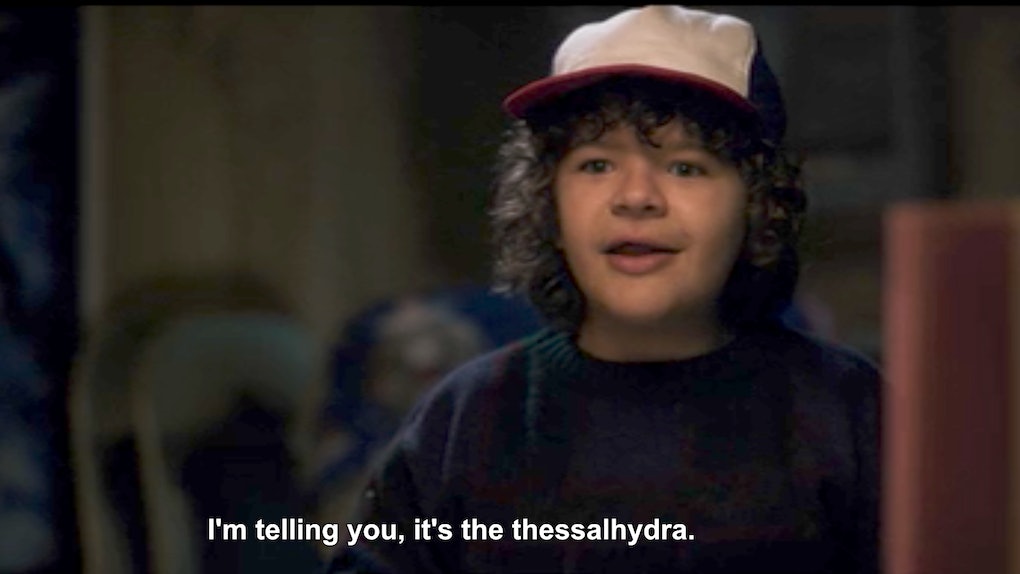 Last year, a group of plucky kids managed to defeat a horrific monster from an alternate dimension, and now it looks like they are going to be up against an entirely new demonic force in Season 2 of Stranger Things. As we eagerly wait for the second season of Netflix's '80s throwback sci-fi series, fans have already put together a pretty convincing theory about what monster will be terrorizing the citizens of Hawkins, Indiana this time around. The Stranger Things Season 2 theory about the Thessalhydra makes a really good case for the big bad this season.

In the first season, we first meet the show's core group of kids when Mike, Will, Dustin, and Lucas are playing Dungeons and Dragons in Mike's basement. The boys struggle and eventually fail to defeat a monster in the game known as the Demogorgon, and later in the series, they must face an actual real-life Demogorgon when it appears from an alternate dimension to kidnap Will. In the end, the kids defeat the Demogorgon with the help of their newfound psychokinetic friend Eleven, and they celebrate in the best way they know how: going back to Will's basement for another game of Dungeons and Dragons.

It is this second game of D&D in the finale episode that fans think could be crucially in predicting the new season. Since the monster the kids fought in the first episode D&D game turned out to be the Season 1 big bad, then it seems to make sense that the show would tease the next major monster with the finale D&D game. And that's where we meet the Thessalhydra.

Unlike the Demogorgon in their first D&D campaign, the kids actually do manage to defeat the Thessalhydra when Will casts a fireball at it in the finale, but the real thing probably won't be so easy to defeat. The teasers and trailers Netflix has given us seem to confirm that the Thessalhydra is going to be the new monster to pop up in Hawkins, as a many-tentacled shadowy figure resembling the beast towers over the town in some shots.

The Thessalhydra is based on the ancient Greek mythical beast the hydra, which is a reptilian monster with multiple heads. Hercules famous fought the hydra, and discovered its horrifying ability to regrow two new heads whenever one of its heads got chopped off. To finally stop the regeneration, Hercules had to burn the chopped-off necks with fire, which could hint to fire being a main weapon used against the monster in Season 2 (it's come up a few times in the trailers).

Within the D&D world, the Thessalhydra also as the ability to shoot venom out of a large mouth at the center of its body, which all of its head grow around. But most telling (and horrifying) of all is the fact that the monster is able to reproduce by infecting hosts with its larvae. Remember those creepy slug-like creatures we saw crawling out of the mouth of Barb's dead body, and that Will coughed up after being saved from the Upside Down? Yeah... it sounds like those things might actually be Thessalhydra babies.

The major, series-arcing question this leads me to is, how are these kids connected to the monsters coming out of Hawkins Labs? I'm assuming that the lab scientists aren't also just huge D&D fans trying to recreate the games monsters. It definitely feels like more than just coincidental that the monsters the kids fight in their campaigns tend to appear in town soon afterwards, so what's up with that? That's a question we'll probably have to wait until the end of the whole series to fully get an answer for, but until then, we have Season 2 of Stranger Things to look forward to. It drops on Netflix on Friday, Oct. 27.

More like this
Who Did Emily Poison? 'The Handmaid's Tale' Season 2 Is Off To An Intense Start
By Ani Bundel
In 'Riverdale' Season 5, Toni Topaz Is The Black Superwoman Without A Cape
By Erika Hardison
This TikTok Theory About Eric From 'Boy Meets World' Will Blow Your Mind
By Rachel Varina
Stay up to date