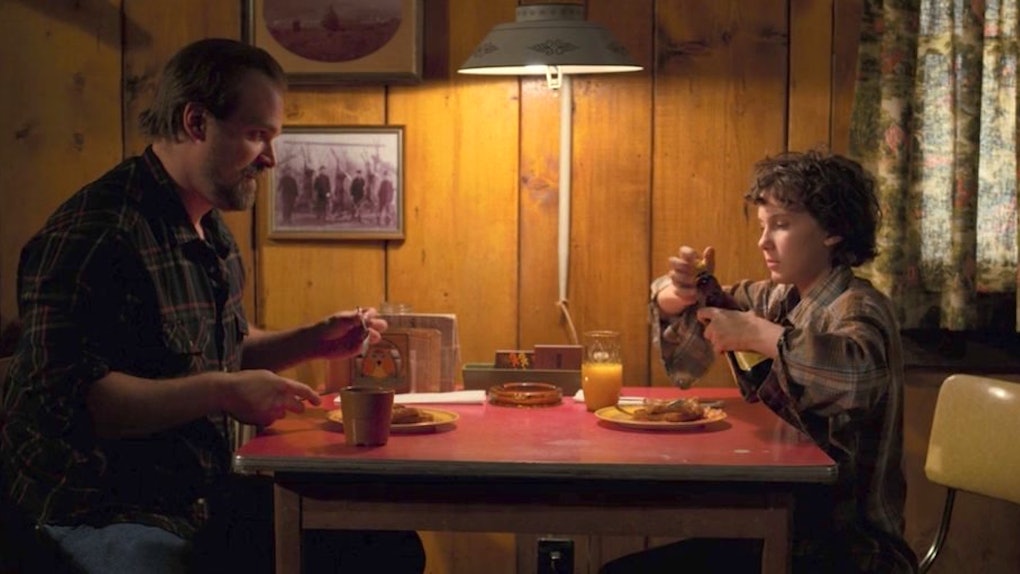 Probably the most heartwarming thing to come out of Season 2 of Stranger Things is the adorable relationship between curmudgeonly police chief Jim Hopper and psychokinetic wunderkind Eleven. Although the two have their issues when trying to get into the groove of their new faux father-daughter relationship, they end up really growing to love and care for one another. In fact, one viewer noticed a small detail in the final episode of Stranger Things Season 2 that proves just how much Eleven has come to mean to Hopper. Seriously — be prepared to cry your eyes out, you guys.

But when Eleven walks into the Snow Ball in the season finale, she's wearing the ribbon on her wrist. It seems like a super sweet detail to further cement the paternal love Hopper has for Eleven. Check out the screengrabs Reddit managed to get of Sara's ribbon below:

If you don't think that is just the sweetest thing you've ever seen then get out of here.

Some commenters on the post actually did bring up the point that Hopper could have just made or bought a second ribbon that looks like Sara's. But it looks more likely that Hopper gave the actual ribbon he's been wearing all these years to Eleven. You can tell Hopper isn't wearing the ribbon when he's outside the dance with Joyce at the end of the season, thanks to another screengrab from Reddit:

Of course, it was a pretty rocky road for Hopper and Eleven to reach the loving relationship they have at the end of Season 2. At the start of the season, Hopper hides Eleven away in his cabin to protect her from everyone trying to track her down. Although Hopper is trying to help, the relationship becomes tense and borderline abusive after a year of him not allowing Eleven to talk to anyone but him or even to go outside. Soon, things reach a breaking point and Eleven runs away to find her mother.

But in the midst of rediscovering her mom and her fellow Hawkins Lab captive Kali (AKA Eight), Eleven comes to the realization that she needs to return to her friends to help them take on the mysterious supernatural monster that's been attacking them all season. After a touching reunion with Mike as well as the rest of the gang, Eleven and Hopper head off to close the gate to the Upside Down in Hawkins Lab and stop the mind flayer.

It is during this drive from the Byers house to the lab in the finale that we see how closely Hopper and Eleven have bonded. The two share a poignant conversation, in which Hopper brings up Sara. After they save the day by closing the gate, we see Hopper get a birth certificate for Jane Hopper, making him Eleven's father. Even is the certificate is just a forgery to help better protect Eleven, there is really no denying that Hopper has proven himself to be a father to Eleven before getting that certificate, and the fake certificate may actually be very accurate.