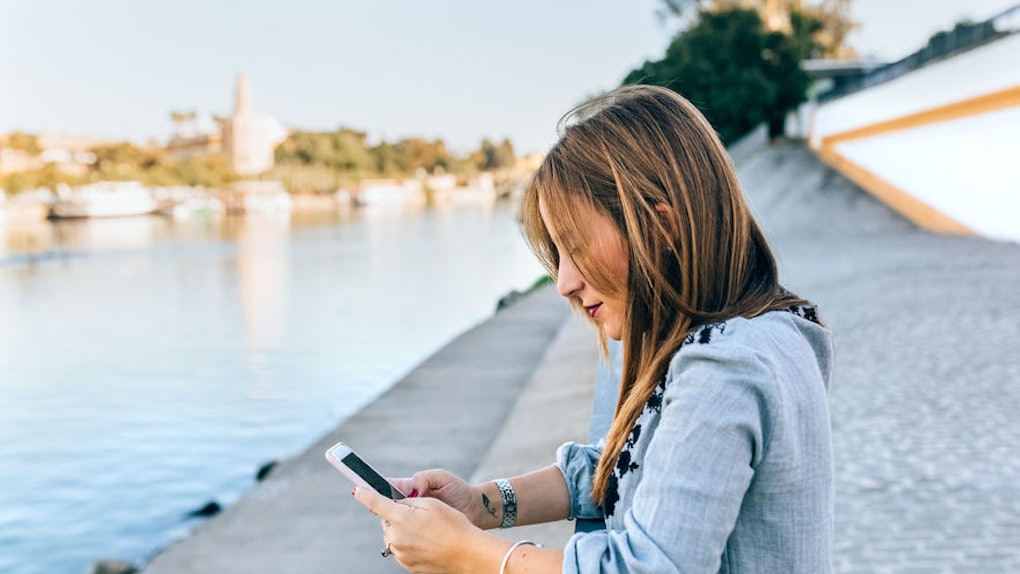 Still Want To Be Friends With Your Friend’s Ex? Send Them These 4 Texts

It goes without saying that staying in contact with a friend’s ex is tricky territory. On the one hand, you had forged your own friendship with them outside of their relationship with your bestie — one that you’d ideally like to maintain. On the other hand, your loyalty lies with your BFF, and they may still be healing. If you still want to be friends with your friend's ex (and you've established that it won’t destroy your other friendship), the question becomes what to say.

The key to sending texts to send your friend’s ex is crafting messages that can accomplish several things at once: opening up the line of communication, so they don’t feel awkward, establishing that you’re not choosing sides, and reassuring them you’re not going to pull a Charlotte from SATC next time you see them and scream, “I curse the day you were born!”

Maintaining mutual friendships after a breakup is possible. First, however, you may feel the need to be clear on how your friend feels, to ensure you're not breaking girl code, which requires considering why the breakup happened. If the ex was cheating, lying, emotionally abusing, or otherwise hurting your friend, then keeping up a friendship with them is an obvious no-no (as is dating or hooking up with them, of course). And even if they didn’t do any of those things, your friend may still feel a little weird about you talking to their previous boo. Once you’ve had an honest conversation about it, it'll be easier to determine whether it’s possible to stay loyal to your bestie while still chatting with their ex.

So, back to those carefully crafted texts. If you’re wondering what to say, here are a few messages that may help you both to find neutral grounds for friendship.

"How are you doing?"

If you had a real friendship with your bestie’s ex that existed separately from their relationship, you’re likely feeling empathy for their feelings post-breakup, too. It’s OK to let them know that. In fact, they’ll probably be relieved to hear you don’t hate them, and that you genuinely care about how they’re doing during this difficult time.

This can be a tough question to navigate because if the ex is still feeling hurt, posing it may open up a whole can of worms. For example, they may start to spew accusations and blame or otherwise talk badly about your BFF, at which point you’ll want to set a crucial boundary: no bashing of your friend. As long as they’re willing to abstain from that, let them know that you’re there for them to be an emotional outlet and support.

"Did you see the game last night?"

If you and the ex happened to share a common interest, that offers a great excuse to text them. For instance, if you happen to be fans of the same sports team, you might casually ask them something relating to a recent game. Bonus: That text then unlocks the opportunity to eventually ask if they want to watch the next one with you. Or, if you’re both into the same band, you might let them know they’re coming to town.

The point is, reaching out to talk about a common interest reinforces the idea that you both have a reason to remain friends. Plus, it gets you both talking about something that has nothing to do with the breakup or their relationship with your bestie.

"Can I ask your advice?"

One of the simplest, subtlest ways to let your friend’s ex know that you two are still cool is to ask for their help or guidance on something.

Maybe you could use their financial expertise in launching your own startup. Maybe you’re about to go on a job interview and they happen to know a lot about the company. Maybe you’re buying new speakers for your apartment and they’re kind of a sound nerd. Whatever it is, reaching out and asking for their advice will show them that not only do you want to keep up contact despite the breakup but also that you value their opinion. They’ll probably be flattered that you wanted their take. And they won’t likely feel as awkward reaching out to you now that you’ve broken the ice.

"I’d love to hang sometime if we can avoid talking about [insert BFF’s name]."

If you’re feeling weird about reaching out, the best approach may be a straightforward text like this one. This gets the message across that you support your BFF first and foremost, and that you’d only like to pursue keeping up contact with the ex if they can leave your friend out of it.

Essentially, you’re declaring yourself a neutral party. Then, it’s up to the ex to decide whether they’re mature enough to keep their friendship with you separate, or whether hurt feelings may get in the way of that being possible.

No one said keeping in touch with a friend's ex would be easy. After all, you have two parties' post-breakup emotions to consider. Still, as long as your bestie doesn't feel betrayed, and the ex is willing to keep your friendship a neutral zone, there's no reason why it isn't possible to stay friends with both people. Any of these texts can serve as an ice breaker that paves the way for a whole new phase of your friendship — one that has nothing to do with their split.