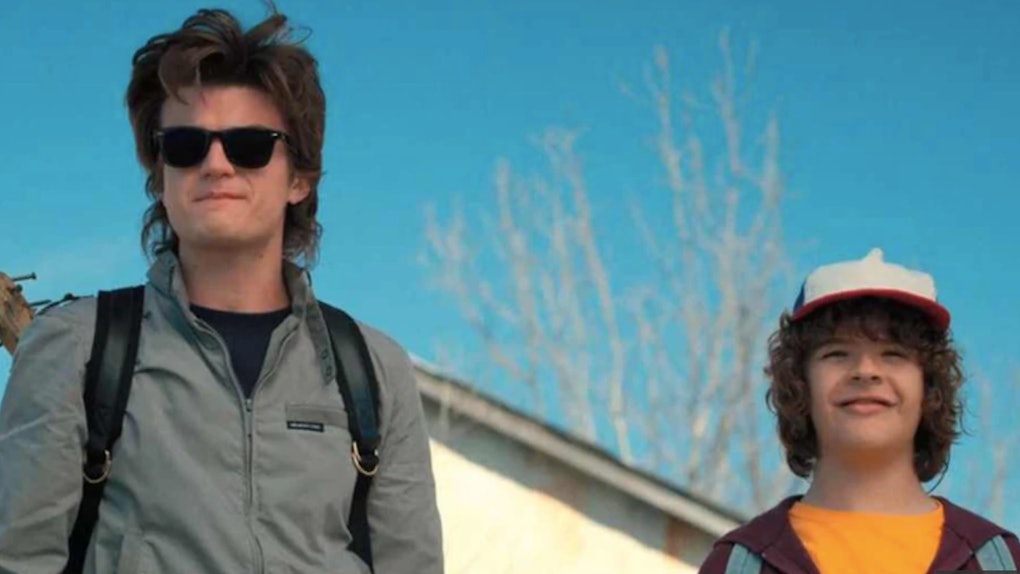 The numbers are in (I have no clue what the numbers actually are, but I'm sure they're good) and it's official: Stranger Things 2 is a hit! For all it's amazingness, there's no disputing the fact the most wholesome aspect of Stranger Things 2 is the mini-bromance between Steve and Dustin. After seeing these two in action together, already fans are dying for a spinoff that focuses solely on them and, I gotta say, I'm not opposed to it. What makes this idea even more perfect? Well, as it turns out, Steve and Dustin are even better friends in real life than they are on the show and I'M NOT CRYING AND CLAPPING, YOU ARE.

Before Season 2 was even green-lit on Netflix, the show's writers and executive producers promised us something different and, boy oh boy, did they deliver. If you're looking for the most drastic changes from Season 1, look not at the Shadow Monster or Dustin's new pearls; instead, look no further than former f—ckboy Steve Harrington. That's right, Steve did a full f*cking 180° turn this time around and fans on the internet are calling him the "king of character development," "the best babysitter," and "mom of the year." Simply put, 1984 is the year of Steve Harrington.

Nothing compares to Steve's big brother/little brother relationship with Dustin, though, and, judging by the looks of some behind-the-scenes pics from the set of Stranger Things 2, these two share the same dynamic IRL, too.

Since the premiere of Season 2 on Netflix, Joe Keery (the actor who plays Steve) has been uploading pics of himself and Dustin from the set to his Twitter with captions joking about making reservations at restaurants like Outback Steakhouse, IHOP, and Cracker Barrel. I don't know about you, but this looks to me like it has all the makings of an inside joke, which, as well all know, only BFFs have. In conclusion, Steve and Dustin's bromance reaches further than the show and this is everything I never knew I needed.

Earlier this year at a Netflix press event, Keery commented on what it was like to work so closely with Matarazzo and the rest of Stranger Things' adolescent cast during filming. The actor praises the young cast members for their ability to be professional on set, but not take things too seriously; he says,

[Gaten is] 10 years younger than me, but I feel like he was teaching me so much stuff. Working with the kids was crazy because it’s like one second we will be in the scene, the next second they’ll be joking and punching each other, pants each other, yelling profanities at each other, then it's ‘action’ and they’ll all go [gasp!] at the same time. They can just switch it on and switch it off and they don’t take it so seriously.

Sometimes you get kind of caught up in the fact that you have to memorize these lines and do this stuff, but at the end of the day, they really have a fun time of it, so that was a really nice presence to have.

TBH, I can see why Joe and Gaten are BFF; I mean, who wouldn't wanna be best friends with Dustin?

Hopefully Stranger Things 3 will see this dynamic expand. I'm sure once Dustin enters high school he'll need all kinds of help and guidance from his cool big brother/BFF, Steve. Especially since, let's be real, he'll probably be fighting some kind of demonic monster at the same time.