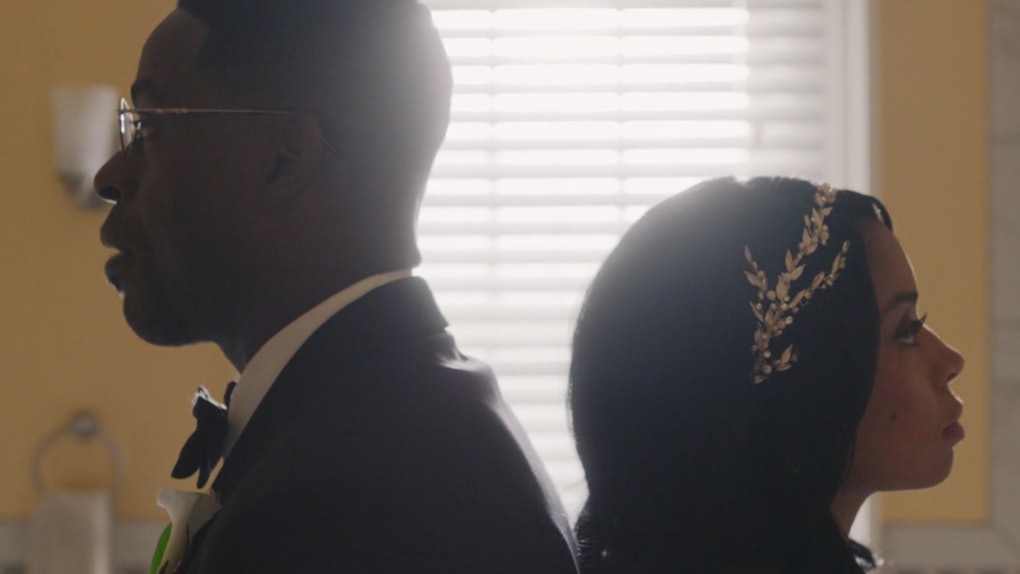 It's never easy seeing your parents fight, and since Randall and Beth Pearson on This is Us are kind of like all of America's parents, it's safe to say all of (or at least a lot of) America is reeling right now. Each week for all of This is Us' three seasons, audiences have tuned in to see Randall and Beth support each other through life's ups and downs. They've always seemed like an example of a happy couple, but in the March 26 episode, titled "R & B," fans saw many more shades to Randall and Beth's relationship. Things aren't all sunshine and lollipops in the Pearson household, and it's been rough to watch. But, the actors who play Randall and Beth have some important insight to share about their characters' relationship. Sterling K. Brown and Susan Kelechi Watson's quotes about what Randall and Beth's big fight means reveal a whole lot. Spoiler alert: This post contains details about Season 3 of This is Us.

For those who need a quick recap, the last few episodes of This is Us have shown Randall and Beth butting heads over their conflicting dreams. While Randall has been working to get ready for his new role as a Philadelphia councilman, Beth has been starting a new career as a ballet instructor. They've been struggling to keep their family life together and to continue to support each other. But, as fans saw in "R & B," there have been small patterns of dysfunctional behavior in their relationship from the very start. The episode showed a series of moments throughout Randall and Beth's history together, from their first date to the year that Randall's brother and birth father were both staying with them almost 20 years later. In each of these moments, the audience sees how strong Randall and Beth's connection is, but also how Beth constantly has made sacrifices for Randall.

At a recent pre-screening event, Brown and Watson gave their perspectives on the state of their characters' marriage. Watson said:

The central issue seems to be a matter of equality, or lack thereof in Beth’s opinion — in her ability to fully express herself. She kind of feels like she usually supports what Randall’s 100 percent in support of, and now at a time when she wants to live to the fullest, she feels like that’s being squelched in some way — that she’s not getting the same support [from Randall].

Even though Brown plays Randall on the show, that doesn't mean that he's exclusively taking Randall's side. In fact, he thinks his character needs to acknowledge his own privilege and bend a little bit more in the relationship the way Beth always has. Brown said:

[Randall's] got big ideas and goes for them, and — like she said — folks get caught up in the wake of that. Now there’s this thing where she’s found her passion, and he’s found a job that takes him three hours both ways away from his family. In his mind, this wouldn’t have worked at any other point in time, but you kind of have to own the privilege and recognize it.

More like this
9 Alexis & Ted 'Schitt's Creek' Quotes About Dating & Relationships
By Lydia Wang
This 'The Handmaid’s Tale' Season 4, Episode 5 Promo Shows June In Chicago
By Ani Bundel
Who Is Ashley On 'Cruel Summer'? Kate's Stepsister Is Up To Something
By Rachel Varina
Stay up to date