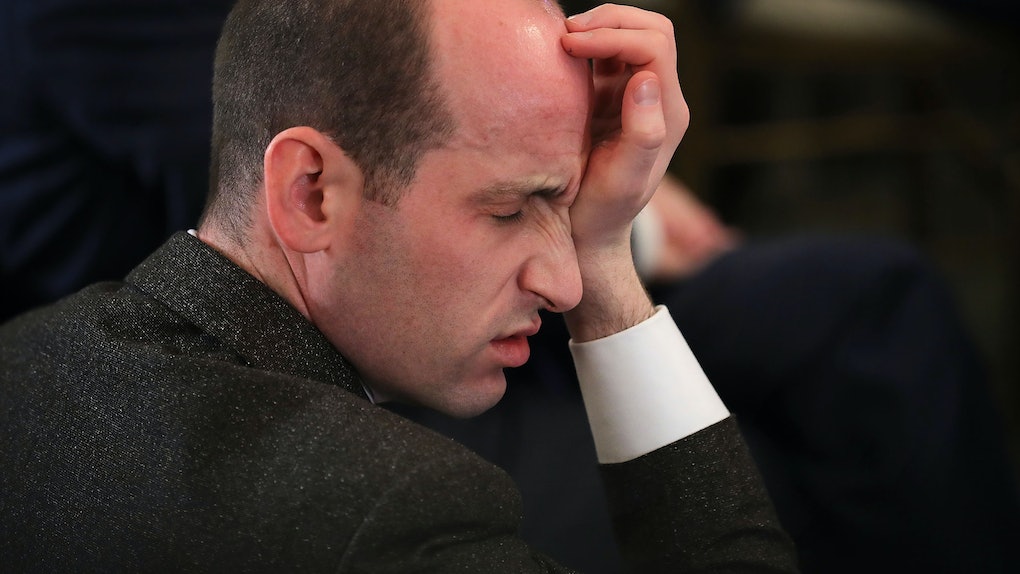 Stephen Miller Threw Away His Own Sushi To Clap Back At A Public Confrontation, & LOL

The staffers of President Donald Trump's White House are really having a tough go of it. They've been kicked out of restaurants, heckled at restaurants, and lectured at restaurants, so basically they should only order takeout from now on. Most recent on the list to have his feelings hurt was White House adviser Stephen Miller, and apparently he couldn't take the heat. After a bartender apparently confronted him outside a restaurant, Stephen Miller threw away his own sushi to clap back at the public confrontation, and I'm finding it pretty hilarious.

The Washington Post took it upon themselves to catalogue all the times Trump staffers have been called out while strolling around Washington D.C. According to the paper, Miller told some of his colleagues that he once picked up $80 worth of sushi near his downtown D.C. apartment, and after leaving the restaurant, a bartender followed him outside and yelled, "Stephen!" When Miller turned around, the bartender reportedly raised both middle fingers and cursed at him, according to Miller's account picked up by The Washington Post. Miller was apparently so angered by the exchange that he just chucked his sushi in the trash, all 80 bucks worth.

I don't know about you, but I find that whole story pretty hilarious. Think about it, this White House staffer — the designer of the Trump administration's zero-tolerance policy on immigration that prosecutes all undocumented immigrants crossing the border and subsequently led to the separation of more than 2,000 children from their parents, mind you — got insulted and then threw the equivalent of a temper tantrum. Miller is a White House employee who, I'm assuming, has to deal with lots of stress and retaliation, and he can't even be composed enough to not throw away his sushi? In fact, Miller handed a double victory to the bartender because he was the one who went home hungry. If Miller really wanted to get one over on the bartender, he should have devoured the sushi right in front of him, not trashed it. Also, like, what did that sushi ever do to you?

Miller is not alone in being upset that people who are unhappy with President Trump are taking it out on White House staffers. Just a few weeks before this sushi report, White House Press Secretary Sarah Huckabee Sanders tweeted on June 23 that she was asked to leave a Virginia restaurant because she works for Trump. Sanders wrote,

Last night I was told by the owner of Red Hen in Lexington, VA to leave because I work for @POTUS and I politely left. Her actions say far more about her than about me. I always do my best to treat people, including those I disagree with, respectfully and will continue to do so

The owner of the Red Hen, Stephanie Wilkinson, explained to The Washington Post that her staff felt uncomfortable with Sanders being there, and so Wilkinson approached the press secretary and told her that the restaurant has standards of "honest, and compassion, and cooperation," and, as the owner, she must uphold them. Wilkinson said in her June 25 interview,

I explained that the restaurant has certain standards that I feel it has to uphold, such as honesty, and compassion, and cooperation, I said, 'I'd like to ask you to leave.'

I think this is one of my favorite stories to come out of the White House. The fact that Sanders was upset over being discriminated against because she works for Trump is the most ironic, because the administration has done the very same thing by siding with a bakery owner who discriminated against a same sex couple.

In early June, the Supreme Court narrowly ruled in favor of a baker who had turned away a same sex-couple who tried to commission a wedding cake in Masterpiece Cakeshop, Ltd. v. Colorado Civil Rights Commission. Colorado, where the incident took place, prohibits businesses open to the public, like the bakery, from denying service based on race, religion, or sexual orientation, according to the ACLU. While the case was still being argued, the Trump administration's Department of Justice sided with the bakery owner and argued that the state violated the owner's First Amendment rights, according to Politico.

So if I can just map this out for you, a place that serves food denied service to a same-sex couple because of their sexuality, and the White House took the side of the business owner. A place that serves food denied Sanders service because of her words and actions in support of anti-LGBTQ+ and anti-immigrant policies, and the White House sided with Sanders. Huh.

If White House staffers are going to keep working within the administration, maybe they should just start a potluck. Does anyone in the White House know how to make sushi?