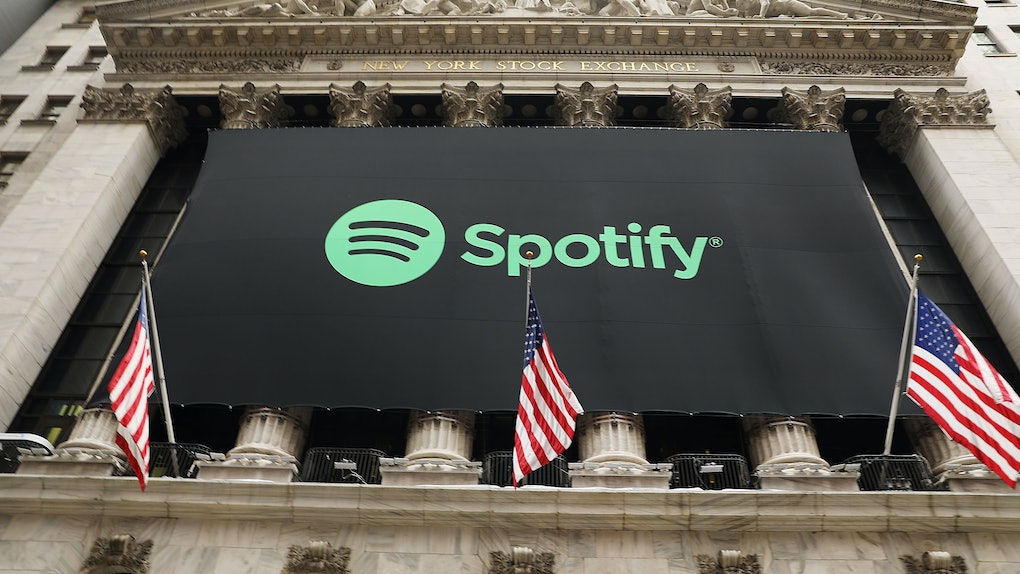 Spotify is changing the way users listen to music. The music streaming service letting users pick and choose which artists they want to listen to, and which one musical acts they never want to hear again. Spotify's new mute feature allows subscribers to permanently block certain artists that they aren't interested in listening to. Now, there's no need to worry about skipping to the next song when a singer or band pops up that you aren't really that into. Pretty legit, right? Here's what you need to know about the latest feature to hit the subscription-based music service.

Spotify's new mute feature was first reported by Thurrott, an online tech news website, and picked up by Billboard on Monday, Jan. 21. Spotify didn't make a big ruckus about the new feature that has the ability to permanently quiet musicians you don't want to hear from. The feature can be applied to block certain artists on playlists, charts, radio stations, and in your personal music library, according to Billboard. Does a certain singer remind you of your ex? Or maybe there's a band that you just can't stand, forever whatever reason? That's exactly what Spotify's new mute feature is for. You can shuffle through songs and listen away without having to worry about ever hearing music from that artist again.

Not sure how to mute an artist? I took a few minutes to play around in the Spotify app and the process of muting an artist or band is very simple. When you are on an artist's or band's page, click the three white dots in the upper righthand corner. This will open up a new screen with three options. One of these options says, "Don't play this artist." All you have to do is click that button and you won't ever hear music from the artist. Change of heart? That's no problem. You can follow the same process to unmute an artist or band at any time.

According to Billboard, just because you mute an artist doesn't mean you won't see the artist appear in the Spotify app from time to time. But, don't worry. Even though the artist still shows up on a playlist or in your library, you won't hear from them unless you unmute the singer or band. If you have muted an artist but you still want to hear a song or two from them, you will have to manually select the song to play it, according to Billboard.

If you don't see this feature in your Spotify app, it may be time for an update. Head on over the the app store within your mobile device and check to see whether you are running the latest version of the app. If not, download the most recent rendition. Once it is done downloading, open up the app on your phone and you should be able to see the new mute feature. Still no luck? Give it a few days. In my experience, sometimes it takes a day or two for a new feature to hit every single user. I'm sure it won't be long before you're able to mute the artists you don't want to hear from.