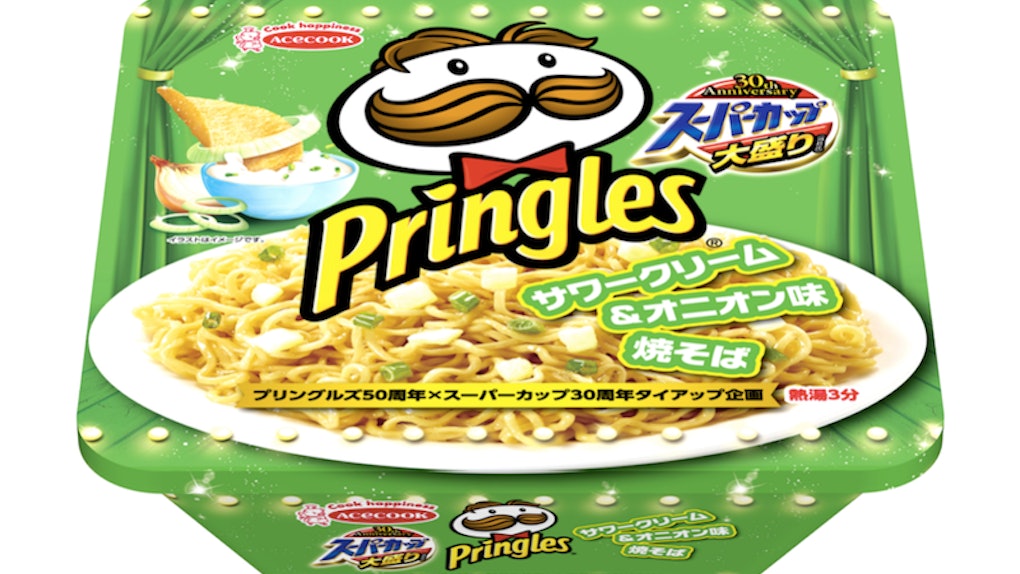 My diet in college consisted of two food groups: Pringles and ramen. I'm not talking about the gourmet ramen that you see all over Instagram when the temperatures drop, though. I'm talking about good old instant noodles with a side of chips. Back in the day, I never thought my go-to undergrad snacks would combine to create the tastiest mash-up imaginable. Alas, I was mistaken, because Sour Cream & Onion Pringles-flavored ramen actually exists. Can you believe it? Who would've thought humankind would create such an extraordinary mash-up? Before you get too hungry and search your local grocery shelves in pursuit of the noodles, let me tell you a little bit more about 'em.

Acecook Supercup recently partnered with Pringles in honor of its 30th anniversary to create Pringles-flavored instant noodles (YUM). According to a press release, the companies released two Supercup flavors together that you're going to adore. They include Big Pringles Sour Cream & Onion and Pringles Jalapeño & Onion — so get ready for a flavor overload. Whether you're into classic Sour Cream & Onion Pringles or the heated Jalapeño flavor option, you probably won't be disappointed.

However, you might be bummed when I tell you where you can get this much-needed snack.

Unfortunately, you'll only be able to find Pringles-flavored instant ramen in Japan. I know, it's a bummer — but look on the bright side! Right now might be a great time to book your dream Tokyo vacation. Customers who are already living in Japan were able to purchase Pringles-flavored Supercup packages as of Monday, Oct. 15. I'm crossing my fingers that this genius collaboration makes its way to the United States in the future.

Thankfully, you can still admire the snacks from afar. According to a press release, the Big Pringles Sour Cream & Onion Supercup includes the "fresh sourness of 'Sour Cream & Onion.'" The Jalapeño option, on the other hand, boasts "long lasting spiciness of 'Jalapeno & Onion.'" TBH, I'd love to try both of them.

Everyone who isn't in Japan can check out the appetizing packaging of both products below:

I don't know about you, but I'm getting hungry just looking at Pringles-flavored instant ramen. If someone in Japan could buy me a package or two and send it over, that'd be great.

Speaking of buying the Supercup packages, let's talk about their prices. Like many other instant noodle options, these won't break the bank. According to a press release, each flavor costs 200 JPY, which is equivalent to $1.78. That means you can try both flavors for under $4! Whether you're a college student trying to save some money or a Pringles fan looking for a new snack, that's a pretty great deal.

Pringles fans probably remember a similar noodle collab' that the company went through in 2017. Instead of releasing Pringles-flavored ramen, though, the company created Top Ramen-Flavored Pringles. These were reportedly sold for a limited time at Dollar General locations, which means U.S. residents did have a chance to try 'em.

I don't know about you, but I'm all about the combination of Pringles and instant ramen. Keep the snacks coming, please.