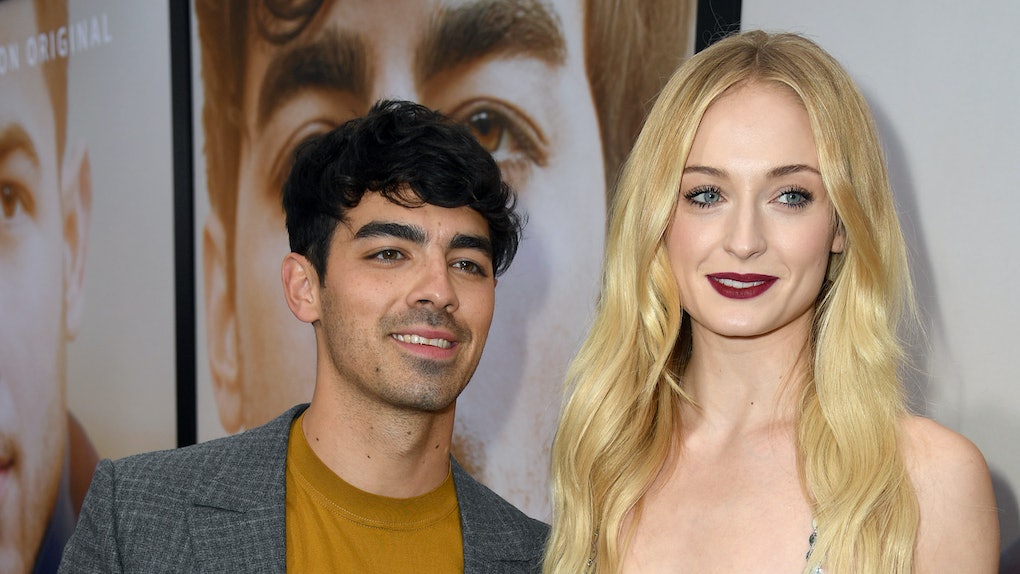 It's not very often that I stop and think about how all of my favorite celebrities have parents. For example, Game of Thrones and Dark Phoenix star Sophie Turner seems, well, pretty self-sufficient. At 23, she's starred in arguably today's most beloved TV show and just married a Jonas brother. At 23, I was living in a mice-infested apartment above a laundromat calling my parents regularly to ask how to use a crock pot. You see the difference. Sophie Turner's dad's reaction to her marrying Joe Jonas is a hilarious and sweet, reminding fans everywhere that, oh yeah, someone raised this badass.

Fans of Turner and her famous JoBro hubby have been following their relationship extremely closely ever since they announced their engagement. Wedding plans have remained scarce, but the two surprised everyone when they made it legal at a spontaneous Las Vegas ceremony the night of the 2019 Billboard Music Awards. While they maintain a formal affair is on the way for their friends and family, it's still worth noting that both Jonas and Turner's parents were not in attendance when they made it official. However, no hard feelings. In fact, Turner says her dad is hyped about her new husband.

During an interview with the Hollywood Foreign Press Association for their HFPA in Conversations podcast, Turner revealed her dad is "getting into the Jonas Brothers," which is hilarious way to describe that someone's father-in-law is now following their career. She continued, "They weren't his demographic, but he's getting into them now and he loves them and the new music is fantastic."

According to Turner, her dad always had a dream of her finding an athlete or a musician, so I guess she nailed that one. "My dad was beyond pleased when I married a musician because it was always kind of, 'You have to marry a rugby player or a musician.' So, I got one of them right."

Girl, you nailed it, in fact.

Like with many newlyweds, Turner said she's still getting used to their new titles as husband and wife. "I keep going from boyfriend, to fiancé, to husband. I can't figure out what to say!" she said.

As for Jonas' famous parents, Paul Jonas Sr. and Denise Miller-Jonas, they did find out their second-eldest tied the knot via the internet. Jonas told SiriusXM, "they did find out online." But, for him, the Vegas wedding was more of an informal technicality they decided to make fun and that the "important day" is still on its way. He explained it,

In my mind, you know, that was the legal portion of the marriage. So I was thinking, like, 'Look, this is not the most important day' There’s an important day, I mean, I'll keep private, but ahead of us. So we were, like, this is just whoever's in town.

He also told Harper's Bazaar, "We had to do a legal marriage before we did a real big one," adding, "It was either the courthouse, or our version, and I preferred our version. Friends, Elvis and Ring Pops."

Honestly? Same. Listen Joe, Sophie, if your parents start to get twitchy leading up to the big day just have them call me and I'll talk them down. I'll accept a seat at your reception as my thank you.