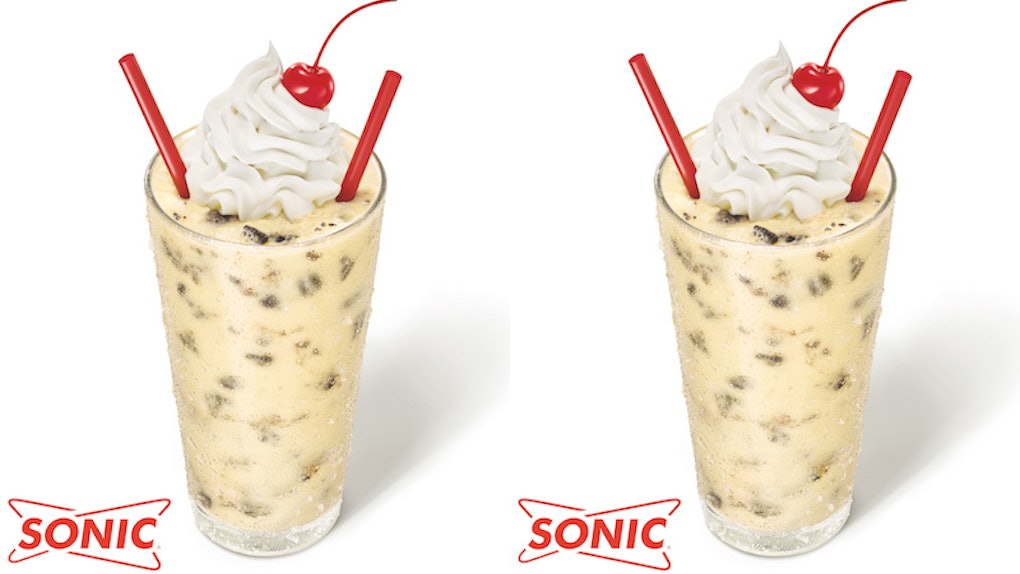 Summer 2019 is looking sweeter already, because Sonic's new Cake Batter Shakes are coming at the end of May. That's right: The milkshake haven that you know and love is adding the classic cake batter flavor to its menu, so save room for dessert. I don't know about you, but I love cake batter everything. Whether it's a cake batter-flavored treat or cake batter straight from the mixing bowl, I'm all over it. With that being said, I'm definitely going to try Sonic's upcoming Cake Batter Shakes when they hit the menu.

On May 1, Sonic announced that the company will be releasing two Cake Batter Shakes that include the Yellow Cake Shake and the Oreo Cookie Yellow Cake Shake. According to a tasting menu provided to Elite Daily in March 2019, the Yellow Cake selection will be made with real ice cream and yellow cake batter (YUM). By the looks of it, the Oreo selection is literally filled with Oreo pieces. Therefore, if you like cake batter with a hint of chocolate, you'll probably enjoy it. Both selections will be released at participating Sonic locations on May 27 and will be available through June 30.

If Sonic's official ice cream menu remains the same throughout the spring and summer, both Cake Batter Shakes will be joining classics like the Strawberry Shake, Chocolate Shake, Caramel Shake, Fresh Banana Shake, and more.

TBH, all of them sound delicious — but I'm extra excited for both Cake Batter Shakes.

If you're excited, too, you're probably already planning your summer Sonic runs. In order to find a Sonic location near you, visit the restaurant's website and hit the "LOCATIONS" button at the top of the screen. Then, enter your city's information and watch local Sonics populate on your screen. When you find your local Sonic, get ready to visit in pursuit of the Cake Batter Shakes.

Thankfully, there are even more new Sonic treats that you can nibble on while you're waiting for those milkshakes to arrive. On March 28, the drive-in announced its Real Ice Cream Cookie Sandwiches, which are currently available. The sweet new sandwiches are made with Sonic's real ice cream and your choice of two cookies. TBH, it sounds like they might give the Cake Batter Shakes a run for their money.

If you like Oreos, you can choose two chocolate Oreo Cookie wafers to hold your ice cream in place, per Sonic. But if you're in the mood for chocolate chip, you can opt for Nestle Toll House's Chocolate Chip Cookies with semi-sweet morsels. TBH, either option sounds delicious. However, according to Sonic's online menu, these are only available for a limited time (so keep that in mind while you're ordering dessert during your next trip).

If you're not in the mood for dessert, you can opt for one of Sonic's new sandwiches, which include the KING’S HAWAIIAN Chicken Club or the KING’S HAWAIIAN Burger Club. Both options were released on April 29 and will add a tasty twist to your savory faves. They'll only be available for a limited time, though, so give 'em a try while they're still on the menu.

With so many new treats and bites at Sonic, it looks like it will be a tasty spring and summer ahead.