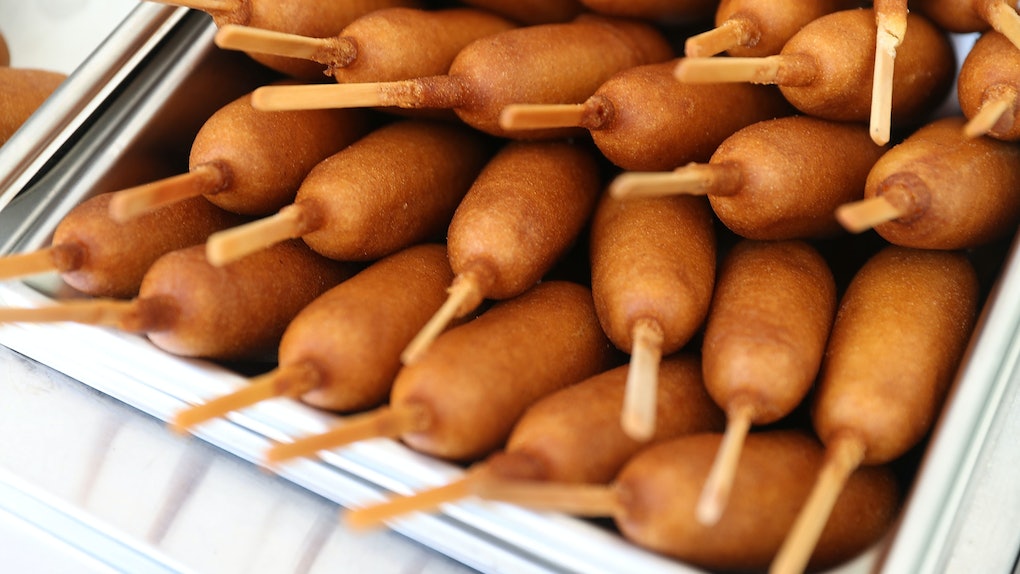 Just like you, I'm totally human. When it comes to prepping meals for the week, I like to say I'm pretty much on the ball, but, of course, there are some deals that even the staunchest meal-prep proponent can't pass up. If I'm being honest, one of my greatest weaknesses lies in the draw of cheap-as-heck food deals, which is precisely why I'm so jazzed about Sonic's 50-cent corn dog deal on May 23. It's about to save me a ton of cash for the weekend (and I can buy several corn dogs at once, totally guilt-free).

On Thursday, May 23, popular Oklahoma-based fast food chain Sonic Drive-In is offering one of its most hyped deals out there... and if you couldn't tell, I'm excited beyond belief. For an entire day, according to an email alert, the chain will be offering one of its staples, the soft-crunchy corn dog, for a mere 50 cents. Yes, you heard that loud and clear, folks — for one dollar only, you'll be able to get yourself two pipin' hot corn dogs. For a fiver, you could get 10 (if you're aiming for a food coma, that is). All I'm saying is that there's absolutely no way in heck I'm about to turn down this tasty deal. Who's with me?

Before making the trek to your nearest Sonic location, an email from the chain recommends ordering ahead of time in the company's app. "And why is that," you ask? Apparently, if you order through the Sonic app, which is available for download in the Apple Store and via the Google Play Store, you can get an entire 50% off on all drink and Slush orders. Yes, you heard that correctly, and when there are discounted Slushes involved, that is not something I can turn down. That would be unthinkable. It's not clear whether you can order the Slush deal and the 50-cent corn dog deal at the same time in the app, so you might want to check with your Sonic location about those specifics, to make sure you get the most bang for your buck, of course!

Oh, and if you really want to fill yourself up for cheap, make sure to stop by your nearest Sonic restaurant after 8 p.m. local time. Participating Sonic locations are — once again — offering the famous Sonic Treat Nights, which get you 50% off Cookie Sandwiches and Hand-Mixed Master Shakes now through Monday, Sept. 2. Seriously, you can get yourself an Oreo Peanut Butter Shake, Oreo Chocolate Shake, Strawberry Cheesecake Shake, or any other flavor of your choice for half-off the normal price. It'll also get you 50% off Sonic's Classic Shakes, like the Hot Fudge Shake, Fresh Banana Shake, and the Caramel Shake, and IDK about you, but this is definitely something I'm looking forward to.

Whether you're trying to save cash for Memorial Day weekend, or if you're simply just trying to eat as much as you can on the cheap, Sonic's 50-cent corn dog deal is kind of ideal. Like I said before, I'm a total sucker for delicious discounts, and this happens to be one of my guiltiest pleasures. There's definitely a corn dog (or three) with my name on it, and I'm unbelievably pumped. Sonic — I'm coming for you.