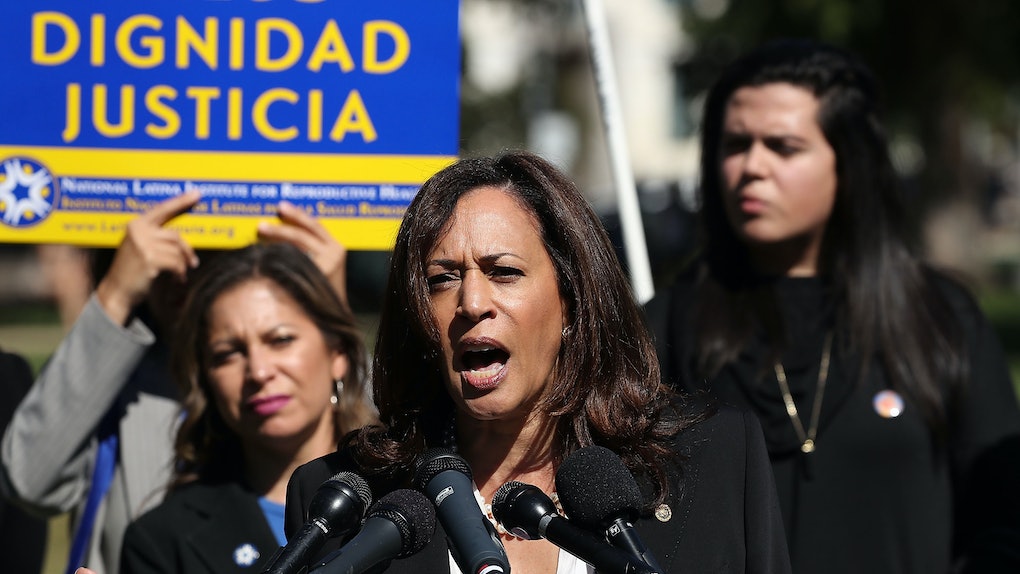 Some Democrats Are Unhappy With How The Government Shutdown Ended

When President Donald Trump signed a three-week funding bill that ended the government shutdown on Monday, Jan. 22, it was because enough Democratic senators agreed to vote for the Republican bill, pushing it past the 60-vote threshold required in the Senate. "Enough" Dem senators — 33, to be exact — is far from all Dem senators, however. And now, some Democrats are unhappy with how the government shutdown ended, according to multiple reports that have come out since Monday.

The list of Democratic senators who opposed Congress' latest funding bill includes some of the party's biggest names. Among all the reports citing their displeasure, there was a common theme: scrutiny for the Senate minority leader, Chuck Schumer (D-NY).

On Monday evening, Politico reported that Schumer faced "pointed questions" in a meeting with Senators Elizabeth Warren (D-MA), Cory Booker (D-NJ), and Kamala Harris (D-CA), all of whom voted against the latest funding bill.

In a statement, Sen. Harris laid out why she opposed the measure even after Sen. Schumer came to an agreement with Senate Majority Leader Mitch McConnell (R-KY). That agreement saw a majority of Democrats vote for the government to re-open in exchange for a verbal commitment from McConnell to allow debate on an immigration bill that addresses the imminent end of DACA.

"The Majority Leader’s comments last night fell far short of the ironclad guarantee I needed to support a stopgap spending bill," Sen. Harris said. "I refuse to put the lives of nearly 700,000 young people in the hands of someone who has repeatedly gone back on his word. I will do everything in my power to continue to protect Dreamers from deportation"

Politico also noted that liberal groups around the country, including groups that raise money for candidates, were "furious" with Democrats and threatened to fund opposing Democrats that would aim to race in primaries against senators who voted to end the shutdown.

The New York Times reported similar details, that liberal organizations were "infuriated" and were threatening to fund new Democratic candidates. The 33 Democrats who voted for the latest funding bill were also accused by a fellow party member of doing so because of fear of vulnerability in the 2018 midterm elections.

"They blinked because they’ll always put the party and the success of the party first," Representative Luis V. Gutiérrez (D-IL) told The Times. "It’s the one word they know in Spanish: mañana."

The reaction to the government shutdown ending reveals two important facts about the Democratic party in 2018.

First, there is a clear divide between Democrats who are more liberal and those who are more moderate. If you want to identify on which side of the fence any given senator sits, it can sometimes be as easy as noticing how far each is willing to go to oppose the Republican party on a certain issue.

On Monday, the vote for Congress' latest funding bill provided a good case study. As if the divide wasn't clear enough, consider a tidbit from The New York Times, which cited an unnamed senator inside a meeting between Democrats that took place before the vote. During the meeting, The Times reports, Minority Leader Schumer asked liberals in the Senate to not criticize Democrats who were voting to end the shutdown, so as to not exacerbate the divide.

The second basic fact about Democrats in 2018? Those who have races against other Democrats in their future have positioned themselves as more liberal.

Meanwhile, those who have tough races against Republicans in their future have positioned themselves as more moderate. The vote for the latest funding bill is revealing in this regard as well.

The small number of Democrats who voted for the funding bill before the shutdown began includes members who are up for re-election in states that Trump won during the 2016 presidential race, like Joe Manchin of West Virginia and Heidi Heitkamp of North Dokota.

Among the Democrats who voted against re-opening the government on Monday are senators who are projected to become presidential candidates for 2020, including Sens. Booker, Harris, Warren, Sanders and Gillibrand.

In other words, the nature of Democrats' future races informs their politics and, clearly, how unhappy some of them are with the way the government shutdown ended.

The latest funding bill is a continuing resolution that will keep the government open until Feb. 8, at which point a new funding bill will be required.