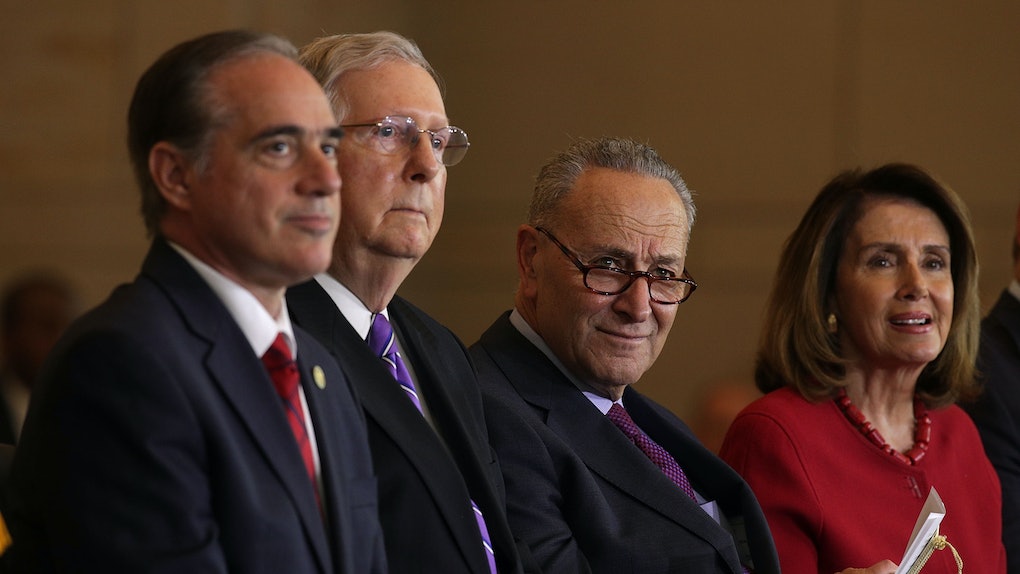 Why Did The Government Shutdown End? Congress Came To An Agreement

After almost three full days of a government shutdown, Congress has come to an agreement on a new spending bill that will last through to Feb 8. After both the Senate and the House of Representatives voted to pass the bill, it went to the White House for President Donald Trump's official final approval. So what caused both sides of the aisle to come together and why did the government shutdown end?

On Jan. 22, the House voted to pass a short-term spending bill that would fund the federal government for just under three weeks. The vote came after 81 senators broke the filibuster that had led to the government shutdown, sending the vote to the House to confirm.

Although this shutdown was not as lengthy as the one we saw in 2013, the reason behind what caused it this time around is a pretty important one. There was one central issue that Democrats and Republicans found difficulty compromising on, and that was how to handle the Deferred Action for Childhood Arrivals (DACA) program. The program was introduced during the Obama administration to protect the 800,000 undocumented immigrants brought to the U.S. as children from deportation. Senate Democrats refused to vote on any spending bill that did not address DACA, hence forcing the shutdown when a budget did not pass by the Jan. 19, 11:59 p.m. deadline.

But on Monday, Jan. 22, Senate Minority Leader Chuck Schumer (D-N.Y.) announced to his chamber that he and the Majority Leader Mitch McConnell (R-K.Y.) had come to an agreement and that the government would officially reopen by the end of the day. The minority and majority leaders agreed to reopen the government on the condition that McConnell and Senate Republicans continue to debate the issue of DACA and negotiate on immigration spending. Schumer stated before the Senate,

The Republican Leader and I have come to an arrangement. We will vote today to reopen the government, to continue negotiating a global agreement with the commitment that if a deal isn't reached by Feb. 8, the Senate will immediately proceed to consideration of legislation dealing with DACA. The process will be neutral, and fair to all sides. We expect that a bipartisan bill on DACA will receive fair consideration, and an up-or-down vote on the floor.

The Senate voted overwhelmingly 81-18 in favor of the new spending bill, breaking the filibuster and allowing it to advance to the House of Representatives. The House then passed the bill, sending it to the White House for Trump's final sign off. The president is expected to sign the bill without problem.

Although the shutdown is officially over and thousands of government employees will now be able to go back to work (and active duty members of the army will start getting paid for their service again) not everyone is happy about this agreement. House Minority Leader Nancy Pelosi (D-CA) announced that she would not vote for the bill once it came to the House following Schumer's agreement announcement, according to Talking Points Memo. “I don’t see that there’s any reason — I’m speaking personally and hearing from my members — to support what was put forth,” said Pelosi.

The issue at hand is that a promise to continue negotiating DACA and illegal immigration do not guarantee that Republicans in the Senate and the House will bend on their positions on these important issues. Schumer is trusting McConnell to lead his own party's Senate members to fulfill this promise of giving DACA another fighting chance, since the program was formally ended by the Trump administration in September 2017. The program's cancellation was delayed by six months to allow Congress to find a permanent solution. Now, Democrats are fighting to create a spending bill that addresses DACA, but there is no official guarantee that both sides of the aisle will be able to come to an agreement.

Essentially, Republicans have 17 days to come to an agreement on DACA by the Feb. 8 deadline. The stop-gap spending bill will only be effective through that date, so if an agreement isn't reached there's a strong chance we'll find ourselves facing yet another shutdown.