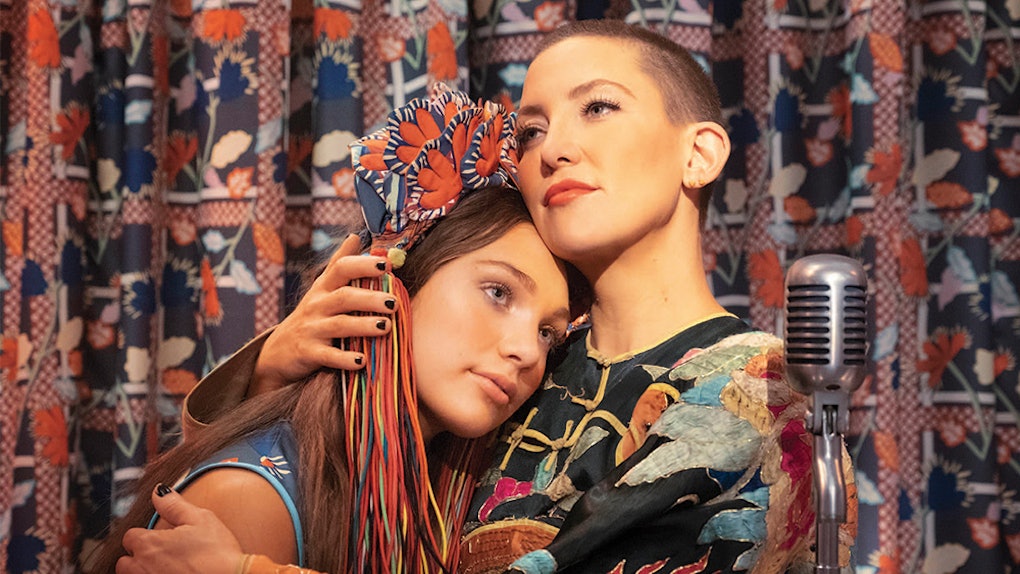 Sia and Maddie Ziegler are teaming up once again on the big screen. Helmed by the "Chandelier" singer in her filmmaking debut, Music tells the emotional story of two sisters with the help of dazzling musical sequences that fans have come to expect from the musician over the years. Here's everything you need to know about Sia's new movie Music, including the plot, premiere date, and cast so you can get ready to sing along with it.

According to Variety, Sia first came up with the idea for Music 15 years ago. She originally envisioned it as a short story, but it was later developed into a feature-length movie in partnership with children's book author Dallas Clayton (who is best known for his Awesome Book series). The film, which also stars Kate Hudson and Hamilton actor Leslie Odom Jr., will be accompanied by Sia's eighth album, a soundtrack to the movie titled Music: Songs From and Inspired by the Motion Picture. It will feature some of Sia's recently released songs like "Together" and "Saved My Life," as well as the artist's new single "Hey Boy" and, presumably, other new songs from the film.

Here's everything we know so far about Sia's upcoming movie Music:

Music will debut in a select number of IMAX theaters in Feb. 2021; despite the continuing coronavirus pandemic making it difficult to safely see a movie outside one's own home, the film's trailer bills it as a "cinematic experience." The movie's exact release date hasn't been officially confirmed, but it is set for sometime in February 2021. The film's companion soundtrack is set to come out on Feb. 12.

The first trailer for Music came out on Monday, Nov. 19.

The fantastical world of Music is filled with familiar faces. Sia protégé Maddie Ziegler stars as the movie's titular character, who has the special ability to view the world in a completely unique way. Kate Hudson plays her free-spirited older half-sister Zu, while Leslie Odom Jr. is their kind-hearted neighbor Ebo.

Although there aren't a lot of details about other characters, the rest of the cast features plenty of stars, including Ben Schwartz, Tig Notaro, and Mary Kay Place.

In Music, newly sober drug dealer Zu's life changes forever when she unexpectedly becomes the sole guardian of her sister Music, a teenager with nonverbal autism and a love of, well, music. With the advice of her neighbor Ebo, Zu soon gets a new outlook on the world (as demonstrated through the movie's multiple musical numbers) while learning to care for Music.

Get ready to make some magic with Music, in theaters in February 2021.