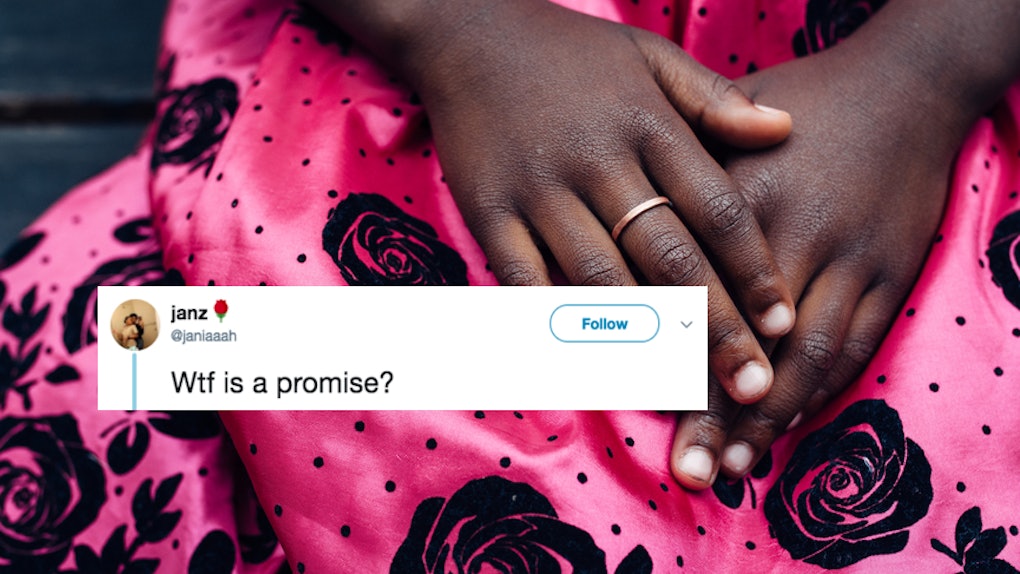 Should You Throw Away Gifts From Your Ex? One Woman Did & Haters On Twitter Are Calling Her Out

An 18-year-old from Houston named Janiah Sanders is going through a breakup of her own right now, according to BuzzFeed News. "The relationship started off smooth as usual, but then once we got comfortable, things went left and there were other girls involved and [I] just threw the towel in," she told BuzzFeed News. Earlier this month, Sanders exercised her right to do what she needed to do to get over her former bae by throwing the two pieces of jewelry he got for her throughout their relationship into the sewer.

She posted herself throwing the jewelry away in a video on Twitter, with the caption "Wtf is a promise?" and since posting, her video has gone majorly viral with over 3.5 million views.

Her caption refers to the fact that her ex-boyfriend gave her the jewelry — a necklace and a ring that she wore on her ring finger — as a promise. "It was a symbol of his love for me and how much I meant to him," she told BuzzFeed News. That being said, once their relationship started going South, the promise he made her and the jewelry that came along with it had "lost all its meaning and value." And what do we call things that have no value? Oh, yeah, that's right. TRASH.

"The reason I threw them out was because I knew that would be my final let go," she told BuzzFeed News. "I knew that once I let go of the ring and necklace, I would know I’m officially done. And so I did. It made me feel relieved. I felt better." Now, before we get into what some critics had to say on Twitter, let me be clear here: The fact that Sanders "felt better" is the only thing that matters here.

Nobody was physically harmed by what she did. Nothing illegal was done. She did what was right for her and took a positive step in moving forward from what seemed to be an unhealthy relationship for her. We should be happy for her!

That being said, there were some haters on Twitter who did not quite understand her reasoning.

Some people were concerned about the money she could have made.

People really wanted to know if the ring was made of real diamonds. SPOILER: Sanders told BuzzFeed News it wasn't.

People were going so far as to call her "petty."

Some people are interpreting the act as a symbol of how truly heartbroken she must have been.

Some people are just straight up confused.

Of course, there are people who understand why what she did is significant.

Some people related on a personal level.

"It wasn't about money or anything," Sanders told BuzzFeed News. "It was about me letting go of old news and unwanted memories." She even added that, despite the hate she received on Twitter, she would do the whole thing over again.

In fact, she would even advise others going through heartbreak to do the same. "If there’s anybody in my same position and contemplating what to do, go for it," Sanders advised. "Put yourself first and love yourself first always. And no matter what people say, do what you have to do."

I'm with Sanders on this one. As long as you're not doing anything illegal or physically harming anyone, I'm all for doing whatever you have to do to move on from someone who hurt you — even if everybody doesn't quite understand your rationale.