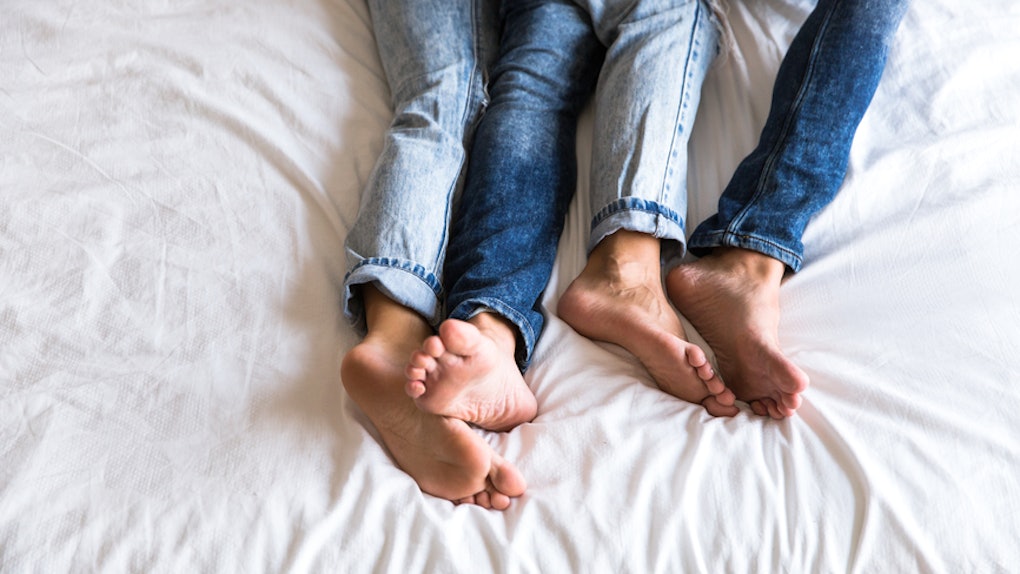 Should You Pee After Sex? This Is What Can Happen To Your Body If You Don't

Listen up ladies, because this is important. I don’t mean to be the Grinch who stole away your spooning time here, but before you get all cozy nestled in your partner’s arms and engage in some serious pillow talk after some steamy sex, it’s probably in your best interest to make a bee-line for the bathroom. Sexy AF, I know, but if after doing your thang with your partner, you’re lying there contemplating should you pee after sex or wait until later, I highly suggest you don’t hold off.

Sex is fun. We all know this. But you know what’s not fun? Urinary tract infections, bladder inflammation, and bacteria build-up in your crotch. And, sure, it may be awkward to put romance aside for a second so that you can flush out, but it’s super necessary, especially for women. According to Everyday Health, women are 10 times more likely to develop a UTI than men, and statistics show that one in five women will experience the uncomfortable symptoms of a UTI at some point in their lives. And, trust me, because I speak from experience when I say that no amount of intimacy is worth the grueling symptoms that come with a UTI. #SorryNotSorry.

Peeing after sex is not a mood-killer, but a necessary, precautionary measure.

SELF reports that because women tend to have a shorter urethras in comparison to that of a man, it’s more likely that bad bacteria can, and at some point will, invade a woman’s bladder. And because vaginal intercourse introduces bacteria into a woman’s urethra, UTIs are generally associated with sex.

However, sex may be the most prevalent cause of UTIs, but it’s not the only source. In fact, anyone can get a UTI, including babies. Some UTIs stem from excessive sugar consumption, diabetes, contraception, and wiping the wrong way when going to the bathroom, among other causes.

Still, those who are sexually active are at a higher risk of getting a UTI, so it’s important to take precautionary measures whenever possible. Otherwise you're in for a long haul of persistent urges to pee, pelvic and/or back pain, a burning sensation while you pee, and rank-smelling urine.

It's worth noting, though, that some women are more prone to UTIs than others.

When I was younger I was that kid who’d catch strep throat twice every year, while my best friend would hardly foster a common cold. Unfortunately, some people are more prone to infections than others, and this applies to UTIs, too.

According to urologist and uro-gynecologist at NYU Langone Medical Center Nirit Rosenblum, M.D., some people are unlucky, in that their bladder walls “allow bacteria to stick more easily,” making them more susceptible to UTIs. She explained to Women’s Health that women who experience frequent UTIs should speak with their gynecologist about their birth control. Because some forms of contraception lower estrogen levels, this could make their bodies more vulnerable to the infection.

Still, you should always try to go to the bathroom after sex, just in case.

Even if you’ve never ever had even the slightest hint of a UTI before, there’s a first for almost everything, but, and I cannot stress this enough, you do not want a UTI to be one of those things.

As far as expert opinions are concerned, some are convinced you should get up and go as soon as you wrap up in the sack, while others grant us a little leeway. Personally, I’d rather be safe than sorry and, like I said, you will be so, so sorry the second it becomes painful to pee and you have the urge to go every five seconds.

Dr. Lissa Rankin told Bustle that even if you don’t feel an urge to pee, pop a squat and try your best to go.

[If] you spent more than five minutes in the sack, a well-hydrated person would have likely collected at least a wee bit of urine in the bladder.

If you never have to pee after sex, you may not be hydrating enough.

Even if your body only manages just a little tinkle, it’s better than nothing.