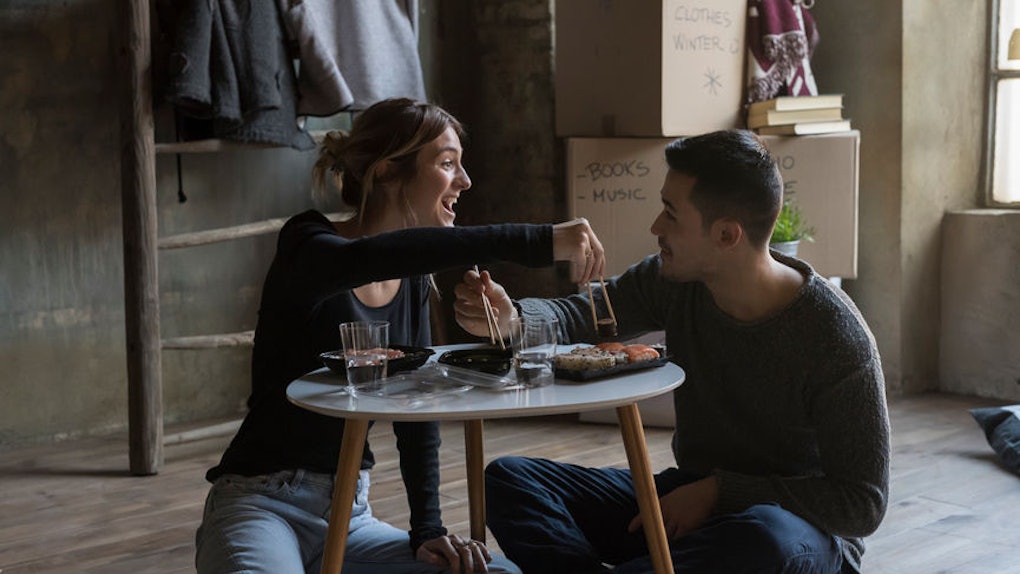 Should You Merge Finances When You Move In Together? A New Study Has Major Findings

There are plenty of decisions to be made over the course of a relationship. In the beginning, there's the big decision of whether or not you want to even be in the relationship and, even once you've established that, there are still plenty of choices left for you two to make as a couple. For example, should you merge finances when you move in together?

A new survey conducted by Policygenius found some interesting information that may sway your decision.

Let me be absolutely crystal clear here: The decision to share your finances with a partner is a totally personal one that varies from couple to couple, and there really is no such thing as a wrong answer.

Having said that, the survey found that 20 percent of cohabiting couples don't share their finances with their partners and they also subsequently found that the people in this group were likely to leave their relationships due to financial issues.

So, while nobody is telling you whether or not to share finances with your partner, we are encouraging you to go into that decision knowing that these sorts of issues are probably going to arise. As long as you're fine with that and have figured out a way to deal with them effectively, you're chilling!

The survey found some other interesting facts about how money plays a role in our relationships. For instance, did you know that about a third of people cohabiting with their partners (30 percent, to be exact) admitted that they don't know their partner's salary!? TBH, that one is mind-boggling to me. Didn't you have to submit your bank statements to get the place you're cohabiting in?! Similarly, almost half (47 percent, to be exact) of survey participants said they didn't know their live-in partner's credit score.

On the more dangerous end of the spectrum, 38 percent of of people said they didn't know their partner's debts, assets or spending habits. This I understand more because it's awkward to talk about and kind of easy to not notice unless it's a huge problem. That being said, it's probably something you should know if this is somebody you're sharing a home with.

Another pretty alarming statistic they found was that 43 percent of people didn't know their live-in partner's retirement savings. If this is someone who you're living with, I'm going to go ahead and guess it's a fairly serious relationship. If you're in a fairly serious relationship, wouldn't you want to know how much money the two of you have saved up for your future? What if you're saving for living on a yacht in Bora Bora and your partner's got enough to pretty much never be able to retire? It's important to discuss these things, people! Even if you have separate bank accounts.

The survey also found that 10 percent of respondents said they're still with their live-in partners simply because they cannot afford to leave them. Breaking a lease or moving is a gigantic financial undertaking.

I'm not saying you have to share your finances with your partner just because you live together. If you want to have separate bank accounts, that's totally cool. That being said, it's still important to talk about money openly and honestly with this person that you're hoping to share your life with to some capacity.