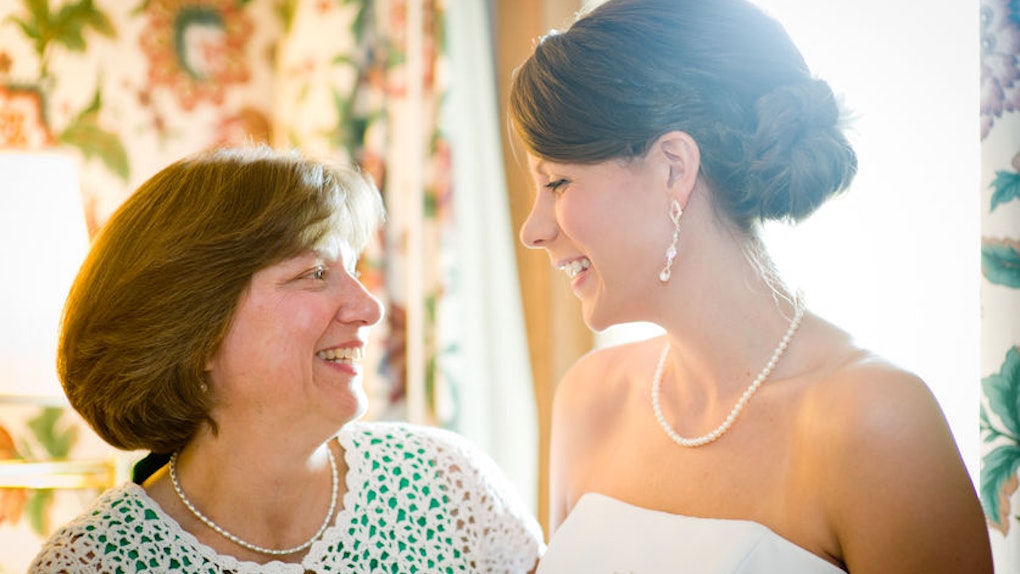 Should You Ask Your Partner's Parents For Their Blessing For Marriage? 9 Women Explain Why Or Why Not

I love weddings and engagements and the whole grand affair, I do (I do). But, there are also a handful of traditions around these events that seem sexist and antiquated AF, no? And yet, we all just kind of follow them blindly. Take the idea that, in heterosexual relationships, the man should pop the question, or the notion that a woman's father must "give her away," like some very well-dressed cattle. We are fierce independent women! We don't men to pass us off and propose, you know? But... Should you ask your partner's parents for their blessing for marriage, or vice-versa? That's one old-school tradition I'm on the fence about.

On the one hand, I'm a firm believer that your relationship is about you and your SO. No one else should really dictate when you take your next step or how you should go about taking it (whatever that next step may include). Plus, you're a grown-*ss woman — you don't need your parents' permission to get married! That decision is entirely up to you.

On the flip side, I like the idea of my partner consulting both of my parents before proposing. It's a demonstration of thoughtfulness and respect, and I'd want my family to be involved in that process. And, if ever I decided to ask someone to marry me, I'd want to know I have their parents' blessing, as well.

But, what did the rest of the world think about all of this? And what might your own partner have to say? I turned to nine women to find out. Here are why five ladies said they'd definitely want their partners to ask for their parents' blessing in advance, and why four others explained there's no need whatsoever.

This woman sees it as a thoughtful gesture.

I think it's sweet. I would definitely want them to ask both of my parents, not just my dad. But it's a thoughtful gesture. And it takes courage.

This woman's glad her husband asked her mom.

Yeah, I think it was important that my husband asked my mom for her blessing! Mainly because I love my mom a lot, and I liked the idea of him honoring her, even though it’s a pretty unnecessary ritual.

And um, you need to ask this woman's mom.

If a guy didn't ask for my mom's blessing, I wouldn't say yes to the proposal.

This woman wants her SO to ask in-person.

This woman's 'old school,' and sees asking as a show of respect.

I'm old-school, so I do want them to ask. It's a respect thing. I'd want my SO to ask my dad for my hand in marriage, and have my mother's blessing, so that I know they are OK and confident handing me over to him as my life protector and partner. Because they won't be around forever, so it's important that they give their blessing to the person I'm with.

This woman might get annoyed if someone asked her parents.

It's not important to me at all. I might even be annoyed if my SO asked. It's funny, because growing up in a small, religious town, it used to be very important to me. But now I think it's something that should be between you and your significant other and no one else. Unless they're brought in as part of the surprise or you need to ask them for advice or something. So, long story short, if there's a purpose to involving the parents, then OK. But asking for the sake of asking them is completely antiquated and unnecessary. It's my marriage, not theirs.

This woman says it's just not important.

I think by that time — if I'm at the point of getting engaged to someone — my parents will already know the person and our relationship, and should have already given their support. The formal ask is an unnecessary step.

This woman would rather share the news with her parents than have her SO ask in advance.

I think if someone really wanted to ask, like if it was important to them to have my parents' blessing, I wouldn't be upset. But I also think it'd be nice for that moment to just be about the two of you. I'd like to be able to call my mom and share the news myself — not hear her say, 'I know!' because my fiancé already told her.

This woman wants her parents to be in-the-know, but not the deciding factor.

Um, I don't care at all. I would want them to tell my parents, so they know, but not ask for their permission or blessing. I'm sure my mom would prefer someone asks because she's more traditional, but that is not what I would like at all, since it's my question to respond to, you know? It's not their choice at all. I think it'd be cute to have my parents come out after my partner proposes, so I'd want them to be in the know, but I just wouldn't like my partner asking my parents if it's OK.

The moral of the story? Different women have very different opinions on the matter. So, at some point in your pre-proposal convos — as you and your partner plan out the future — maybe ask them how important their parents' blessing is to them. You might be surprised by their response.