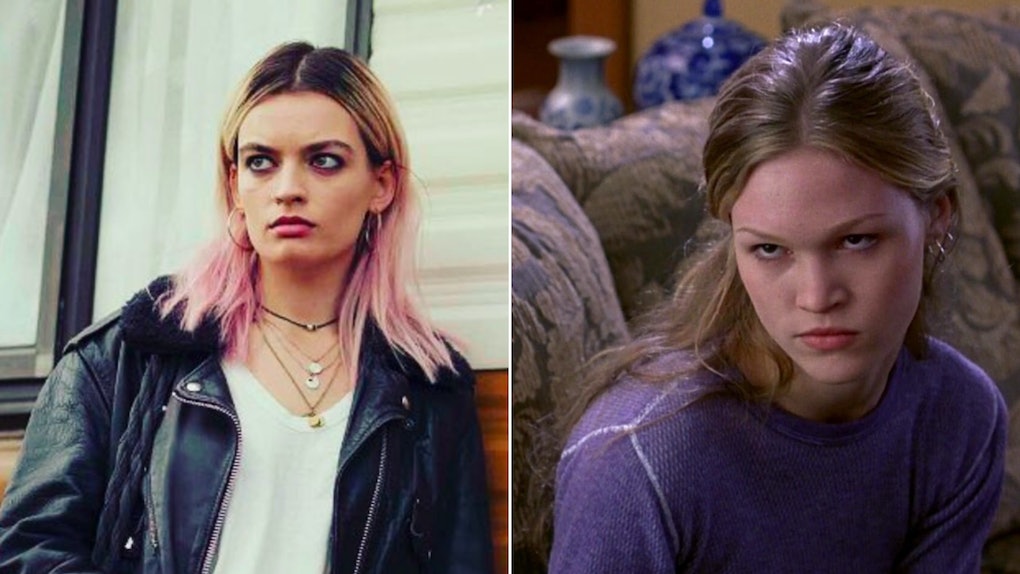 Netflix's latest original series Sex Education has taken the internet by storm, and it is no wonder why young viewers are getting so attached to the new show. The series is all about the son of a sex therapist who opens up his own underground sex clinic at his British high school. While that concept is totally unique, viewers did notice some references to beloved high school dramedies of the '90s. Most specifically, Sex Education and 10 Things I Hate About You have a lot in common, fans are pointing out. And once you start looking for those similarities yourself, it really is wild how much the new Netflix series has in common with the iconic teen movie.

In case you forgot, 10 Things I Hate About You came out 20 years ago in 1999, starring Julia Stiles as the outspoken and tough Kat Stratford and Heath Ledger as the bad-boy outcast Patrick Verona. The story is an adaptation of Shakespeare's The Taming of the Shrew translated to a modern high school, in which nerdy newcomer Cameron (Joseph Gordon-Levitt) bribes Patrick into dating Kat so that he can date her popular younger sister Bianca (Larisa Oleynik). From a plot standpoint, there does not seem to be too much overlap with Sex Education, but once you break down some specific scenes, the similarities become clear. Oh, and be warned that some mild spoilers for Sex Education are coming up.

One fan on Reddit pointed out a number of similarities that the show and movie share. Probably the most noticeable is when Jackson professes his love for Maeve by singing a song in front of the whole school with the swing band backing him up. That scene is definitely reminiscent of Patrick belting out "Can't Take My Eyes Off of You" with the marching band to win over Kat.

There is also conflicted popular girl Aimee getting super upset when everyone trashes her house during a party, which is similar to Bogey Lowenstein's freak-out during his house party in 10 Things. That party also includes a meaningful chat on a swing set, which is another iconic moment from 10 Things.

And although Otis definitely is not as nefarious as Cameron when it comes to setting people up, there are definitely echoes of Cameron paying Patrick to date Kat when Jackson offers to pay Otis to help him win over Maeve. Otis actually refuses to help, but winds up accidentally helping anyway, which is similar to Cameron accidentally helping the popular jock Joey Donner into winning over Bianca. With Otis kind of mirroring Cameron from 10 Things, Maeve seems to clearly come from the Kat Stratford school of feminist rebellion — she even shares Kat's specific interests in Bikini Kill and Sylvia Plath.

Oh, and let's not forget that 10 Things I Hate About You also includes a character who is not afraid to frankly discuss sex. Although Allison Janney's school counselor/erotic novelist Ms. Perky is definitely less scientific about sexuality than Sex Education's Jean Milburn.

So if you have finished Sex Education and want to watch something similar, a rewatch of 10 Things I Hate About You might actually be the perfect follow-up.

More like this
Shonda Rhimes' Quote About Regé-Jean Page Leaving 'Bridgerton' Is SO Shonda
By Rachel Varina
'Selena: The Series' Part 2: Netflix Release Date, Trailer, Cast, & More News
By Dylan Kickham
Who Is Cleo On 'Outer Banks'? Carlacia Grant Is New To Season 2
By Ani Bundel
Stay up to date