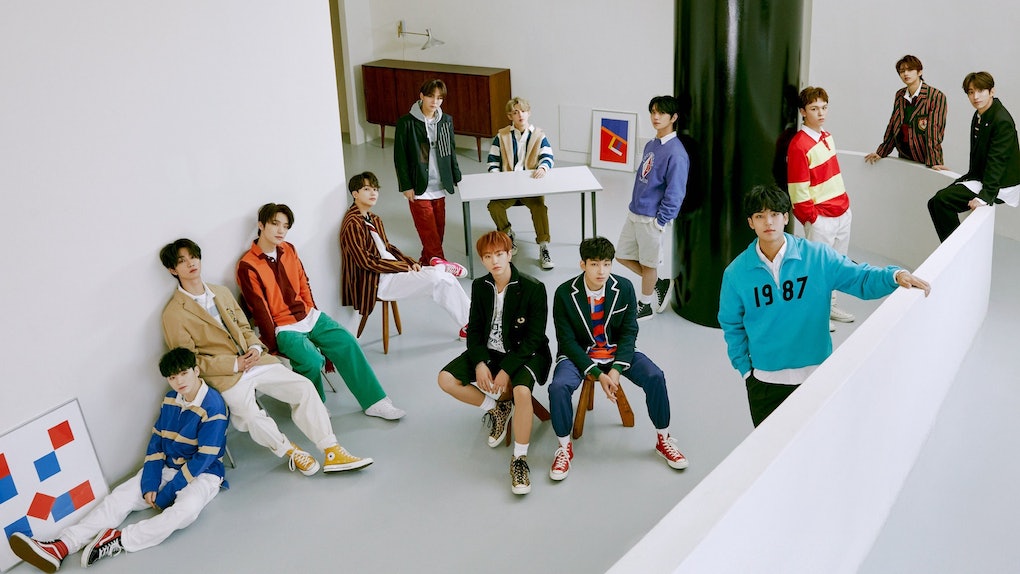 SEVENTEEN Made Their 'Semicolon' Album To Give CARATs Strength — EXCLUSIVE

Many people are just waiting for things to get back to normal amid the coronavirus pandemic. SEVENTEEN, on the other hand, is using this time to stop and reflect on their lives up until this point. That move may come as a surprise since the music industry is so fast-paced, but SEVENTEEN felt the change of pace was necessary to recharge. The group weaves this message through their latest EP, ; [Semicolon], because just as a semicolon represents a break in a sentence, they hope fans will remember to take it easy every once in a while, too. SEVENTEEN made their ; [Semicolon] album with one purpose in mind: to give CARATs strength during these difficult times.

Each new release from the group has shown immense growth, as they've learned to overcome their greatest hardships together. After they dropped their 2019 single "Fear," a dark track about the guys running away from themselves, SEVENTEEN released "Left & Right" in June 2020 to send the message they can face and get through anything. Now, SEVENTEEN dropped ;[Semicolon] to allow themselves to catch their breath amid an exceptionally challenging year, hoping it'll help fans do the same.

"Everyone is going through a tough time these days, and we wanted to make an album that serves as a rest stop and point of break for everyone, including our CARATs," SEUNGKWAN tells Elite Daily, adding as long as fans find comfort in their lyrics, he feels they've done their job as artists. "We are grateful to be able to release an album in such times. We’ll be more than satisfied if our music can give people strength and positive encouragement."

With this in mind, SEVENTEEN thought the perfect song to cheer fans up was "Home;Run," a swing-based dance track written by WOOZI, VERNON, and SEUNGKWAN. "We hope that listening to our lead single will allow listeners to have fun, take a break, and stay stress-free," WOOZI says.

In "Home;Run," SEVENTEEN compares life to a game of baseball. They hit their fears out of the park by reminding themselves the point isn't to win the game (though, keeping it real, they often do just that), but to have a good time. "Keep your head up/ We’ll wake up to a new tomorrow/ Hey you throw that ball/ Let’s have some fun," the group sings.

The rest of the songs on ; [Semicolon] also send a message to live life in the moment. For SEVENTEEN, putting that theme into action meant shaking things up throughout the creative process.

Usually, when SEVENTEEN records sub-units, they divide into their hip hop, vocal, and performance groups, but this time, the group went in a different direction. "For this album, we formed a total of four units based on ages in order to show our various charms and limitless potential," JEONGHAN explains. "The idea arose because we’re always thinking about what new things we can deliver for our CARATs.

This new challenge resulted in four epic new sub-unit tracks unlike anything CARATs have heard from the group before. "Do Re Mi," by SEUNGKWAN, VERNON, and DINO, is about following your heart and not worrying about the little things, while "HEY BUDDY," which brings together The8, MINGYU, and DK, is about friends enjoying a beautiful day together. JUN, HOSHI, WONWOO, and WOOZI's track, "Light a Flame," focuses on a new beginning. And then "AH! LOVE," which sees S.COUPS, JEONGHAN, and JOSHUA teaming up, is all about their love for CARATs meaning more to them than anything.

SEVENTEEN takes pride in producing their own work, actively participating in their songwriting and choreography. WONWOO says coming up with new material isn't difficult when all the guys work together. "We have 13 brains to brainstorm together, so we’re always able to come up with new themes and storylines," he says.

The group has been pumping out new music over the course of five years, across 16 albums and EPs. Since they've been continuously making comeback after comeback, SEVENTEEN tries their best to take in all their achievements when they can. "I stay on the move and keep myself busy. But the most important thing is to make sure to keep doing the things I like and enjoy the moment," The8 explains.

Following the massive success of their June 2020 album, Heng:garæ, which sold a million copies in its first week, ; [Semicolon] is off to an even stronger start, as it sold 1.1 million copies in pre-orders alone. SEVENTEEN says they're thankful for the commercial success, but what really makes them proud to call themselves artists is their impact on their fans. "Moreso than accomplishments and results, I want to be able to give people strength and positive influence through our music," MINGYU says. "I hope this special album will be one that helps people to treasure this moment in their youth."