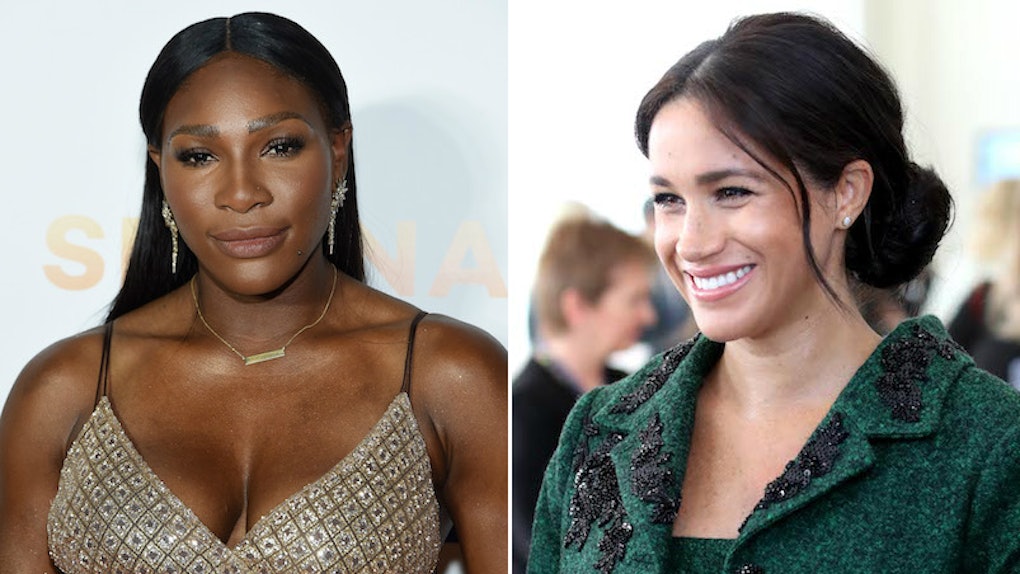 "Go best friend. That's my best friend." That's what Serena Williams basically said to Meghan Markle, the Duchess of Sussex, when she found out she is pregnant with her first baby. The multi-championship winning tennis player threw Meghan one of the most extravagant baby showers I've ever heard about in my adult life and apparently was more than happy to do so. Serena Williams' quotes about planning Meghan Markle's baby shower are so sweet and have her at the top of my invite list when it comes time for my own baby shower. (Serena, I'm just gonna need your mailing address whenever you have the chance...)

The epic soiree went down in New York City during the last week in February at the luxurious and ultra-expensive hotel, The Mark. Williams took on the task of planning the entire event and reportedly footed the bill of the venue, too. (More on that in a moment.) According to Williams, it was really important to her that everything was exactly right for her dear friend. A few days after the shower, Williams spoke with Business Insider about what it was like planning the shower. She explained, "Planning something like that takes a lot of effort. I’m a perfectionist, so I’m like, ‘Let’s make it perfect.'"

Honestly? It sounds like she knocked it out of the park — er, tennis court — or something.

According to reports, Williams booked out The Mark's penthouse suite. Just to give you an idea of what that costs and looks like, The Mark's penthouse boasts five bedrooms, six bathrooms, a massive dining room, chill library lounge, and a glamorous rooftop terrace with massive panoramic views of Central Park. Oh yeah, it also reportedly costs $75,000 a night. Cosmopolitan reports it is the largest penthouse suite in the U.S. and it has popped up on other lists as the most expensive hotel room in America.

Naturally, I did as much digging as I could to get a good look at the thing and found this video:

In true perfectionist style, a source told Elle magazine Williams had every last detail accounted for and even viewed multiple venues before landing on this stunner. "Serena had made sure all the little things she liked were there: her favorite foods, flowers, and music. Everything was so thoughtful and tastefully done," the insider said. Additionally, there were no true shower games planned, but there was one special activity Williams set up for her friend. Reportedly, the women in attendance were treated to a flower arrangement session while they munched on Michelin-star food prepared by famous chef Jean-Georges Vongerichten.

If this is the kind of "low-key private" party Williams likes to plan, imagine what she would do with something like New Year's Eve!

Today, Meghan is expecting her little one to arrive any day, which means she is unable to travel to see Williams. (Not that her busy royal schedule would allow for it, but ya know. It's the thought that counts.) However, I suspect Williams will be popping by the U.K. soon to meet the new little one and/or at least send some sort of lux baby gifts in the meantime.

We all deserve a friend like Serena. Don't you think?