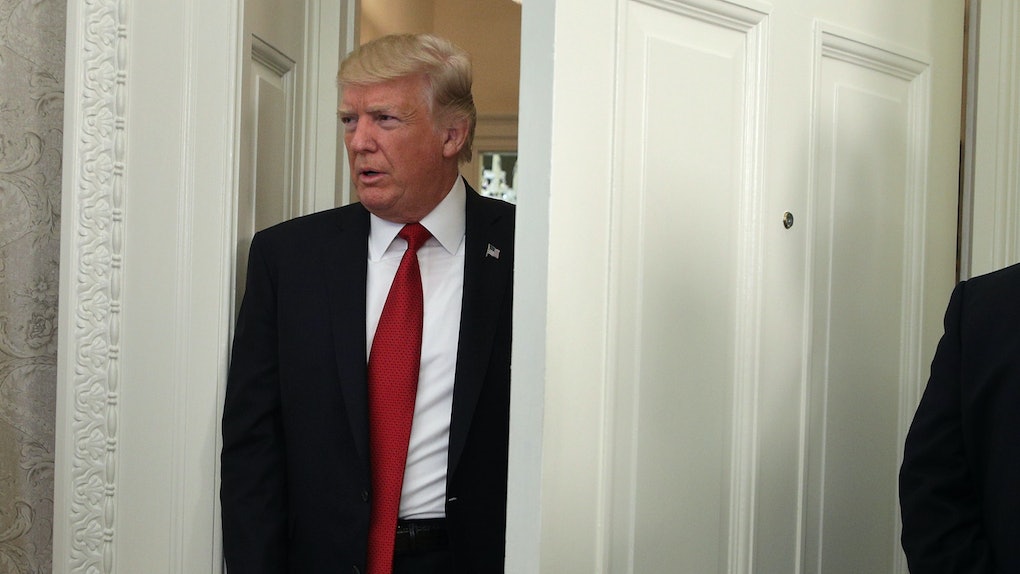 On Oct. 6, the Trump administration announced they were rolling back protections from the Affordable Care Act (ACA, aka Obamacare) on birth control coverage. Under Obamacare, all employers had to provide birth control coverage on health insurance plans, so women would not have to pay for contraceptives. Following two cases that made it to the Supreme Court, it was determined that employers could refuse to provide coverage for religious reasons, but birth control would still be covered via other means. However, President Donald Trump reversed this in early October with the rollback.

Now, employers and insurers can claim they have a religious or moral objection, and thus deny birth control coverage entirely. In response to this, the Keep Birth Control Copay Free campaign created a tool where you can send Trump your birth control invoice — and it's super simple to use.

Without insurance coverage, birth control is expensive, plain and simple. Based on Keep Birth Control Copay Free's analysis of publicly available data of average costs, oral contraceptives (i.e. the pill) costs $600 a year, the implant costs $800, the IUD costs $1,111, and sterilization surgery costs $6,000. So, yes, this rule change from the Trump administration can have very serious implications on a woman's ability to control what happens in her body.

That's where the invoice generator comes in.

All you have to do is fill in a bit of information and an invoice will be created and sent to Trump and the U.S. Department of Health and Human Services. It will also be submitted to the Federal Register, so it's marked as an official comment made against the new rule.

From there, you select which form of contraceptive you use.

Once you've done that, an invoice is generated and you just have to fill out your information.

As we hear every day, it's vital to make your complaints known to the government through calling, writing, and whatever other creative ideas you've got. Outside of voting in elections and literally testifying in state houses, contacting elected representatives is pretty much us private citizens' only way to actually have a voice in what's going on in politics to try and sway things. So this invoice generator is a crazy easy way for you to give yourself (and your uterus) a voice.

"Women are tired of footing the bill for male politicians' attacks on essential reproductive health care," Amy Runyon-Harms, Keep Birth Control Copay Free's campaign coordinator, said in a press release. "Together, we are pushing back against President Trump’s dangerous political decision to reduce access to birth control and today we are sending him the bill. Copay-free birth control saves Americans at least $1.4 billion each year. And we figure, with Donald Trump’s frequent proclamations that he’s ‘very rich,’ he shouldn’t have a problem absorbing the cost."

The cost of contraceptives can be a major obstacle for women, and there have already been many benefits of the Obamacare rule, including both financial savings and a drop in the abortion rate, which researchers credit to better access to contraceptives.

In its first ten months, the Trump administration has made several attacks on women's health and reproductive rights in particular. This includes the nomination of Neil Gorsuch, who has voted against birth control access, to the Supreme Court, and an unsettling case in Texas of an undocumented teenager being held by the administration from getting an abortion (on Tuesday, Oct. 24, a federal appeals court ruled that the Trump administration could not continue to stop her from getting the legal medical procedure).

With all this going on, it's important that we keep paying attention and making use of the tools at our hand, like this one from Keep Birth Control Copay Free. Make your voice heard to protect your future.

More like this
Will Colleges Require A Coronavirus Vaccine In Fall 2021? The Rules Are Clear
By Rhyma Castillo
The More Contagious B-117 COVID Variant Is Now The Most Common Strain In The U.S.
By Rhyma Castillo
These Tweets & Memes About Matt Gaetz's Venmo All Make The Same Joke
By Cianna Garrison
Stay up to date