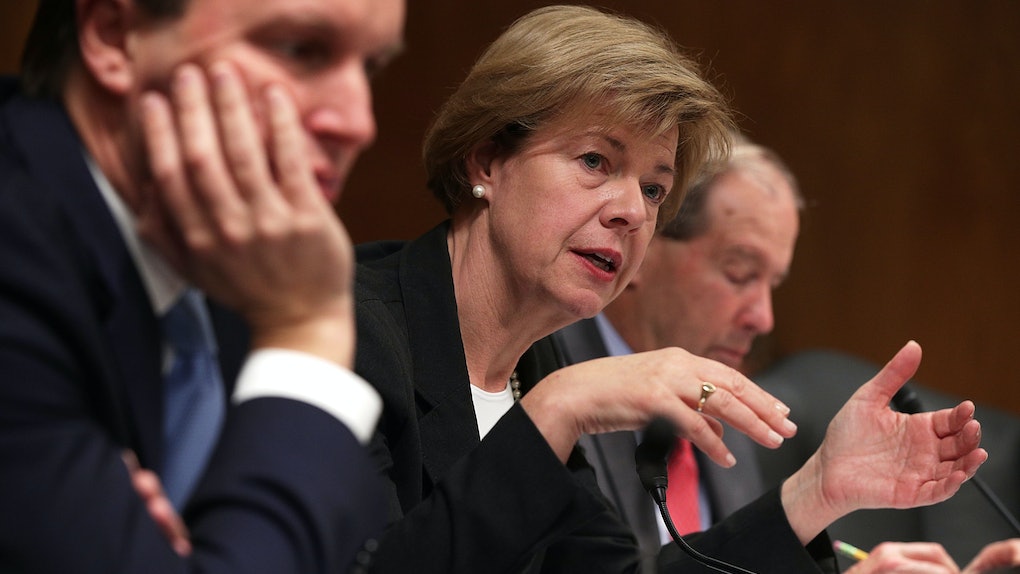 As the midterm elections approach in November and the country grapples with the political status quo, Sen. Tammy Baldwin has been regularly repeating her motto: "You can't mistake progress for victory." The Wisconsin Democrat, who broke glass ceilings twice to become the first openly gay member to be elected to the House (and later the Senate), has been around to witness firsthand some of the country's biggest shifts around women's and LGBTQ rights. But under the Trump administration, Sen. Tammy Baldwin isn't taking anything for granted.

"We made remarkable progress very quickly during the Obama administration," Baldwin tells me in an interview for Elite Daily. "Some of that was in the Congress, some of it was the president, and some of it was the courts." Notably, in June 2015, during President Barack Obama's second term in office, the Supreme Court legalized same-sex marriage nationwide with its ruling in Obergefell v. Hodges.

"Now, with President Trump, we've seen some of that progress come to a screeching halt," she says, "and efforts to roll back progress made for the LGBTQ community."

Baldwin, currently the only out LGBTQ member of the Senate, is one of just two LGBTQ women in Congress overall. The other is Rep. Kyrsten Sinema, who represents Arizona's 9th District. According to the Victory Institute, which works to increase LGBTQ representation in government, despite making up 4.5 percent of the population, Americans who identify as LGBTQ comprise just 0.1 percent of the nation's elected officials. But that may be about to change.

Almost 400 LGBTQ candidates are running for office across the country this year, according to The New York Times, in what's being called a "Rainbow Wave." Among them are several LGBTQ women running for the House. If even a few of them are successful in their races, the House could see a record number of female LGBTQ representatives. And that representation could double in the Senate, too: On Aug. 28, Sinema won the Democratic primary for one of Arizona's seats in the Senate, where she could join Baldwin. But that gamble cuts both ways.

Sen. Baldwin, too, is up for re-election this year, and in a state that went for Donald Trump in 2016, it's far from a sure win. So, the stakes are clear: A win for both Baldwin and Sinema would break the record for LGBTQ members in the Senate, but losses for both this November would leave the Senate devoid of female LGBTQ representation.

"The severe underrepresentation of LGBTQ people in elected office — especially LGBTQ people of color and transgender and bisexual people — is one of the primary reasons we see hateful legislation and policies coming from the federal government and many state legislatures," says Mayor Annise Parker, President and CEO of LGBTQ Victory Institute in a statement to the Victory Institute.

In the last two years especially, Baldwin has been on the front lines to see numerous decisions against women's and LGBTQ rights come down the pipeline.

It's a frightening time.

Compared to the Obama administration, the LGBTQ community now faces a very different political landscape. The Supreme Court, with two new Trump-appointed justices, is now likely to sway conservative. In the West Wing, Vice President Mike Pence has a fairly well-documented history of opposing gay marriage, and his political record is alarming to LGBTQ advocacy groups who have interpreted his views as condoning conversion therapy, though his spokesperson denied that this was the case. In February, the Trump administration took steps to undo federal protections for health care for LGBTQ workers. And questions remain whether Judge Brett Kavanaugh, Trump's nominee to replace the retiring Justice Anthony Kennedy on the Supreme Court, was involved in the Bush administration's push to ban same-sex marriage while serving as White House staff secretary.

"As both a woman and a member of the LGBTQ community, I talk to many who are very frightened about what's happening right now — whether it's about health care, women's rights, [or] LGBTQ equality," Baldwin says. "I think it's a frightening time."

When it comes to state laws, "LGBTQ people lack the most fundamental protection from discrimination," she says. "The battle is far from over for basic equality." That's a big part of why Baldwin has led the push for the Equality Act to establish comprehensive, nationwide protections for LGBTQ+ Americans against discrimination in areas like housing, education, and work.

A crucial point of progress in the Obama administration, Baldwin notes, was counting LGBTQ Americans for the first time in a national health survey in 2014. Being counted in federal surveys, she says, is crucial, as it provides insight on how to best serve the needs of that community. This goes a long way towards informing the government and lawmakers about its citizens as it makes decisions that can impact their lives.

To that end, there's also a push to get LGBTQ Americans counted in the U.S. Census. The Census Bureau announced in March that it would include a question about same-sex relationships on the 2020 census. But many advocates were critical of the move, as it would leave out Americans who identify as LGBTQ but who aren't actively in a relationship. In light of that, the Senate introduced a bill this summer to include questions about sexual orientation and gender identity on the 2030 census.

In a Republican-held Congress, Baldwin doesn't expect to see any major progress on that issue anytime soon. "Now, we see a real retreat under the Trump administration," she says, "and frankly I believe if you're not counted, you're invisible."

She's not the only advocate for the LGBTQ community who sees a tough road ahead. "A lot of our community felt comfortable under Obama, when LGBTQ rights were advancing and it seemed like we were heading towards equality," Victory Fund Senior Communications Director Elliot Imse tells me in an interview for Elite Daily. Now, thanks to current policies — such as threatening to ban transgender people from serving in the military and from bathrooms — he sees the community renewing its call to arms, and running for office as part of that fight. In his experience, there's nothing quite like having those voices at the table. "When LGBTQ people are in the halls of power, they end up humanizing our lives for our fellow lawmakers," he says.

Baldwin's motto cautioning against mistaking victory for progress may not be the most uplifting one out there, but it's one that's been shaped by a lifetime in politics, with battles hard fought and won. Baldwin has been in politics since her 20s, being elected to the Dane County Board of Supervisors at age 24 in 1986. In 1998, she became Wisconsin's first female representative and the first LGBTQ candidate to be elected to the chamber who was out at the time of her first election. Then, 14 years later, she made history again, becoming the first openly gay candidate elected to the Senate in 2012. In fact, it was the need to address those rights that led her to band together with fellow LGBTQ members to form the Congressional Equality Caucus, which pushes for equal rights for the LGBTQ community.

Though she's cautious in letting up on the push forward for civil rights, Baldwin is encouraged by what she's been seeing from others. "I'd be pretty depressed right now if I had been observing people look the other way after this past presidential election," she adds. "But I've been seeing such hopeful signs by people getting involved and saying, 'I'm a part of the answer.'"

And that energy, importantly, hasn't faded, she says. In the beginning of Trump's presidency, around the time of the Women's March in January 2017, she says she was afraid that people would be politically active in the moment, only to give up hope, as countering the administration would prove a David-and-Goliath struggle. But, she says, she's been heartened to see that that hasn't happened — people haven't given up.

She hopes to see that energy translate at the polls in November, and the fact that people are not being silent about their concerns but voicing them, she says, is big. One way this energy might translate: electing a new and diverse crop of candidates to office.

Overall, the midterm elections this year have brought the political landscape to a sort of reckoning day, where the face of leadership is changing. A wave of non-traditional candidates have not only been running, but been winning in the primaries, signaling a potential shift in the makeup of Congress away from one that is predominantly white, male, and over 50 — and straight.

"Young people have a much better view of the long run, not just today and tomorrow," Baldwin says. "And on issues like environment, climate change, equality, economic justice, social justice, we need more people with a long view who are thinking about future generations."

She adds, "We have to understand what the stakes are at this particular moment — it's going forward or backwards, really. So, we need their voices desperately." I ask Baldwin what advice she'd give to the younger generation in particular looking to get involved politically. Her answer was pretty clear: "Run!"

There's still a long way to go to achieve more equitable diversity in Congress — the country would need to elect more than triple Congress' current total of seven LGBTQ lawmakers to achieve equal representation, and for all levels of office nationwide, increase that by about 40 times. But pending the outcome of the midterm elections in November, Congress could be hearing from a lot more voices like Baldwin's.