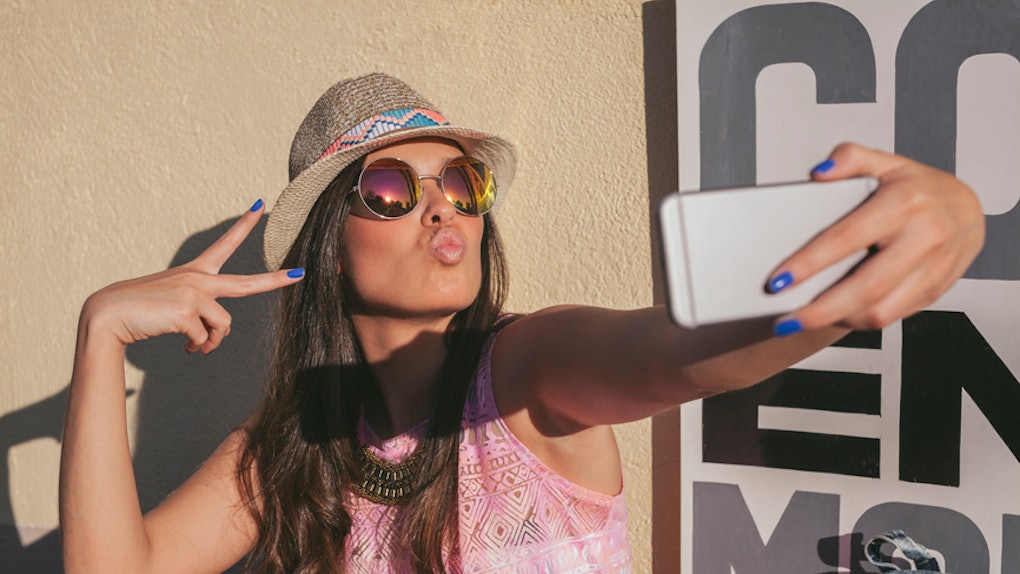 ’Selfitis’ Is An Obsession With Posting Selfies, According To A New Study

Taking pictures has never been easier than this moment in technology. The days of remembering to pack your digital camera (or procuring a disposable camera) in order to capture special moments are long gone. Cameras are right there on your phone, tablet, or computer, so you never miss a photo opportunity. Thanks to the addition of filters and front-facing cameras, snapping selfies has never been easier (or more fun). Well, it turns out there is now a name for indulging yourself in one too many selfies a day. "Selfitis" is an obsession with posting selfies, according to a new study in the International Journal of Mental Health and Addiction.

The term "selfitis" first surfaced in 2014 when a phony news article falsely claimed that the American Psychiatric Association was going to begin recognizing it as a real disorder, according to Business Insider. Recently, though, researchers have continued studying the term and have given it more validity as an actual disorder. The findings are a result of a study with more than 400 participants from two Indian universities — only in 2017 would selfies require scientific research.

Psychologists Mark D. Griffiths and Janarthanan Balakrishnan, who performed the study, published their paper in the International Journal of Mental Health and Addiction.

They expanded the definition selfitis by creating the "Selfitis Behaviour Scale." On this scale, there are three levels of selfitis severity. There are "borderline" cases, which are marked by someone taking at least three selfies a day but do not post them on social media. The "acute" level is reached by posting at least three selfies a day, and the highest extreme on the scale is the "chronic" stage. Chronic selfitis is defined as someone who cannot control their urge to take selfies and posts them up to six times a day.

OK, so the borderline cases are pretty benign. It's not too difficult to rack up three selfies a day, especially when you've got new Snapchat Lenses and Filters to check out. Acute and chronic selfitis, though, sound like there might be something more going on there.

Griffiths and Balakrishnan thought so, too, so they questioned the participants about the motives surrounding their selfies, and they narrowed it down to six factors, which included environmental enhancement and self-confidence. Concerning their environment, the participants agreed or disagreed with statements like, "Taking selfies provides better memories about the occasion and the experience," according to the study. The study found that the overall results expressed that individuals on the whole enjoy taking selfies to provide a way to create memories of an enjoyable environment. That's why you pull out the selfie stick when all of your college besties get together for a reunion brunch over the holidays.

When it came to self-confidence, Balakrishnan relayed that those who tend to show symptoms of selfitis generally suffer from low self-esteem. During the study, participants would agree or disagree with statements like, "I become more positive about myself when I take selfies." The study further posited that the ability to transform a selfie with apps and filters allows individuals to get closer to their most ideal versions of themselves, which can lead to greater self-confidence. The downfall is that it may only be short-lived before self-confidence dips down again, according to the study.

While Griffiths and Balakrishnan advocate for more research into selfitis to continue to understand the true psychological effects, there are some who don't want to define complicated and complex human actions with one broad term, according to Business Insider. Mark Salter, a spokesman for The Royal College of Psychiatrists, called it "irresponsible" to define human behavior in such a way because he believes it presents a danger of creating a reality that doesn't truly exist.

The term "selfie" only solidified itself in the lexicon four years ago when Oxford Dictionaries named it their 2013 Word of the Year. Since then, it's become ubiquitous in everyday life — just check your camera roll.

Given that the term selfitis is also so new, there is definitely room for more research and a more complex understanding of the disorder. Until then, enjoy your filtered selfies, but remember that you're just as great without them.