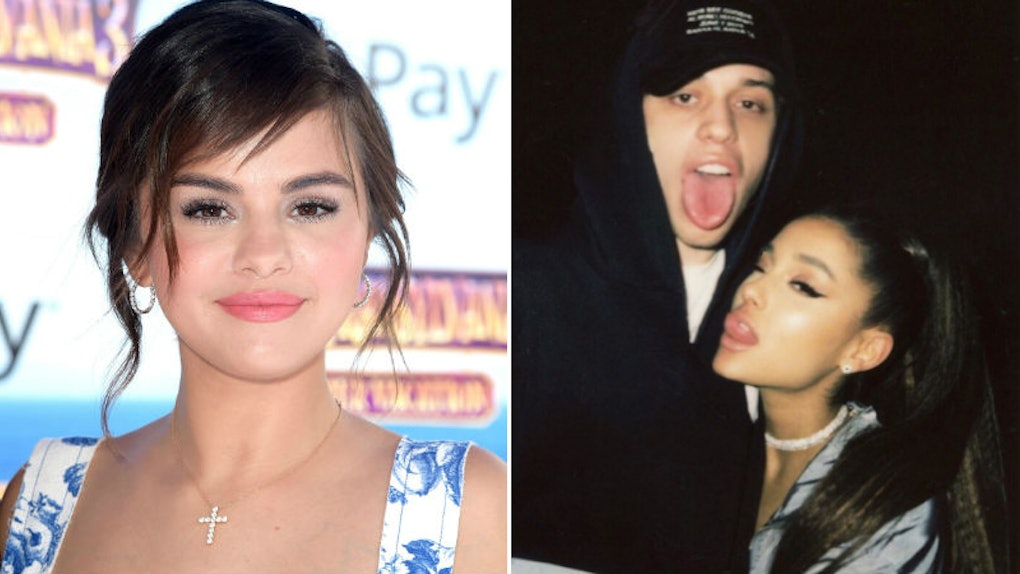 Everyone’s getting engaged, it seems. And when there’s an influx of something unusual (like speedy engagements), that usually means everyone is going to weigh in on it. Take Ariana Grande and Pete Davidson’s engagement, for example. Most people have a thought or two to share on how quickly they got engaged. Even Selena Gomez is talking about it. And while that may not be the engagement you were hoping she would shed some light on, Selena Gomez’s comments on Ariana Grande and Pete Davidson’s engagement are relevant nonetheless.

“I honestly don't know what Mavis would say,” Gomez said. “But I would say that it's amazing and beautiful.”

Well, she kept it really short and sweet, but it’s genuine all the same.

Of course, people all over the world are awaiting her response to Justin Bieber’s recent engagement to Hailey Baldwin.

Over the course of their very long and very unstable romance, Gomez and Bieber seemed destined to be together. They could hardly stay away from each other. At least, not for long.

Fans have even speculated that Gomez’s new tune “Back To You” is about Bieber. In the song, Gomez sings of longing for someone when she’s not supposed to:

And then there’s that verse about unfinished business, which has Bieber written all over it:

Naturally, everyone thought these lyrics were about Gomez and Bieber getting ready to reconcile. But not even a catchy song could make the stars align for the two singers.

They were fated for other things. Bieber confirmed his engagement to Hailey Baldwin on Monday, July 9, with a deeply heartfelt message. It was filled with declarations of love and promises for the future:

Was gonna wait a while to say anything but word travels fast, listen plain and simple Hailey I am soooo in love with everything about you! So committed to spending my life getting to know every single part of you loving you patiently and kindLY. I promise to lead our family with honor and integrity letting Jesus through his Holy Spirit guide us in everything we do and every decision we make. My heart is COMPLETELY and FULLY YOURS and I will ALWAYS put you first!

And assertions that Baldwin was the love of his life, even though they dated only briefly in the past:

You are the love of my life Hailey Baldwin and I wouldn’t want to spend it with anybody else. You make me so much better and we compliment eachother so well!!

Bieber also made it known that he wants to be a role model for his younger siblings:

Can’t wait for the best season of life yet!. It’s funny because now with you everything seems to make sense! The thing I am most excited for is that my little brother and sister get to see another healthy stable marriage and look for the same!!!

So, that puts the Jelena rumors, conspiracy theories, and hopes for the future to rest.

More like this
Selena Gomez's New Collarbone Cross Tattoo Has A Spiritual Meaning
By Sydney N. Sweeney
When Are Ariana Grande & Dalton Gomez Getting Married? Here's The Reported Tea
By Corinne Sullivan
The Queen's Reported Reaction To Meghan Missing Prince Philip's Funeral Is Understanding
By Brandy Robidoux
Stay up to date