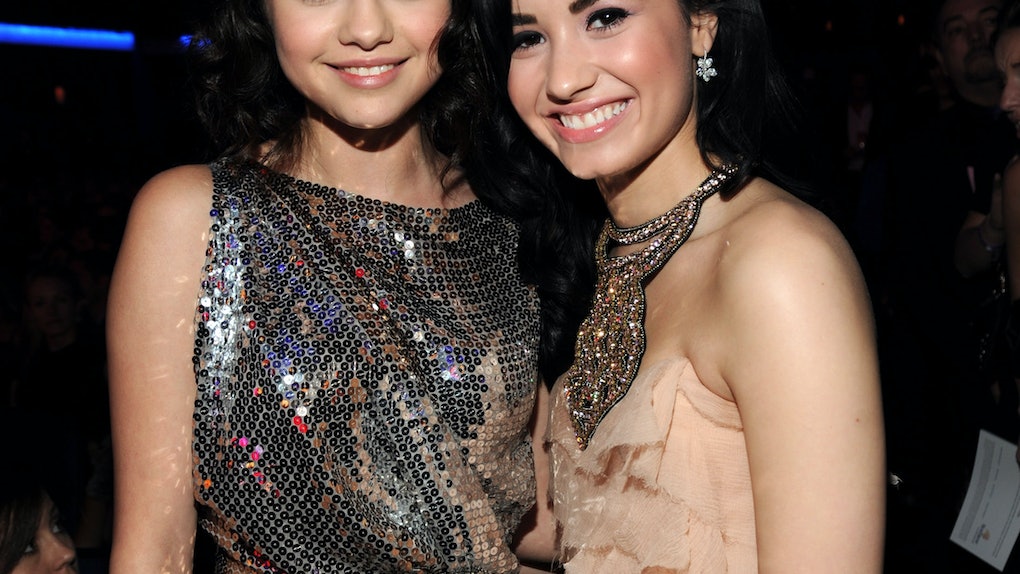 When Selena Gomez and Demi Lovato got their start on Barney & Friends together at 7 years old, no one could've guessed they'd become two of the biggest stars on the planet. Yet, here we are. From the big screen and the top of the Billboard charts, to YouTube documentaries and fashion campaigns, it's hard to go a day without hearing their names. The two stars have had a complicated friendship through the years and, because of their superstar status, every up and down was highlighted in the press for all to see. But, they've always been super transparent about where their relationship stands, and Selena Gomez and Demi Lovato's quotes about each other perfectly capture their special bond.

Behold, the ultimate throwback. When Gomez and Lovato shared a YouTube Vlog together in 2008, they had nothing but the sweetest things to say about each other.

As the two besties were chatting in their first ever vlog, Lovato pointed to Gomez and said, "This is my best friend in the entire world.

Gomez followed with, "And this is my best friend ever since we were 7-years-old."

2009: Gomez Gushes About Lovato To The Press

The next year held nothing but blue skies for Gomez and Lovato's friendship. One shining moment was when People ran a feature called "Demi & Selena: Inside Their Friendship!"

When asked what their favorite thing to do together was, Gomez replied, "We enjoy doing everything together. But our favorite is to chill at each other's houses."

2010: Their Friendship Takes A Questionable Turn

Lovato made an eyebrow-raising comment about her friendship with Gomez that instantly went viral. When stopped outside of her hotel in London, a fan asked Lovato how Gomez was doing, to which she shortly replied, "Ask Taylor."

The comment came just after Gomez and Taylor Swift were spotted hanging out on multiple occasions, which ignited rumors Gomez and Lovato had a falling out. To this day, fans are convinced Gomez's friendship with Swift is what lodged a wedge in their friendship.

May 2010: Lovato Admits She And Gomez Grew Apart

In a May 2010 interview with Girl’s Life, Lovato appeared to admit she and Gomez drifted. “We’re both busy, and I wish the best for her,” Lovato said.

However, she also insinuated there was a little more to the story. “True friends don’t let their friends or family be mean to you. If you can’t trust somebody, you can’t be friends with them," she added.

After Lovato entered rehab in 2010, she revealed Gomez was one of the first to call her up.

"[Selena] called me crying when I was in there and was just so worried,” Lovato said in an interview with Television Net. “I was like, ‘Look, I should be the one crying, it’s all good!’ But she was so worried and ever since then we’ve gotten closer."

In a May 2013 interview with MTV, Lovato hinted her friendship with Gomez was, once again, on solid footing. She even gave insight into what had gone down between them in the years prior.

“We’ve been through a lot together, we’ve had periods of times we here we grew apart and we just didn’t really talk,” Lovato said. “Now we are in a place where I think we realized that life is so short and that when you have people in your life that love you so much then, you should just always be around them. She’s going to be a big sister, and I want to be around for that. Everything about her, she has a great soul, she’s talented, she’s beautiful, and she will always be really, really close to my heart.”

August 2014: Lovato Brushes Off Rumors Of A Feud

Fans took notice when Gomez and Lovato unfollowed each other on Twitter in 2014, sparking rumors they were feuding again. But in an interview on Watch What Happens Live, Lovato insisted that, while they weren't close, it was NBD.

“Are people reading too much into it? Are they reading into something that doesn’t exist? I think it’s just one of those things where people change and people grow apart," she said.

Following Gomez’s 2017 kidney transplant, her long-time friend had some very supportive words to share. “I think that she is a very strong woman,” Lovato told People. “I’m very happy and proud of her."

When Lovato released Simply Complicated, Gomez was there to support her. The popstar sent Lovato high praise about the documentary, which explored her experiences with substance use disorder, anxiety, and the pressure of fame throughout her career.

"This was beautiful. I'm so happy for you. You always continue to [be] bold and real. I wish more people were like you. Love you," she commented below one of Lovato's Instagram posts, according to E! News.

Lovato replied to the heartfelt message, saying: “@selenagomez thank you so much, this means the world to me and more. Love you too."

In an interview with Elle, Selena expressed the love she has for her long-time friend following her 2018 drug overdose.

“All I’m saying is, I reached out personally. I didn’t do a public thing. I didn’t want to. I love her. I’ve known her since I was seven. So that’s what I’ll say," Gomez explained.

Nothing outweighs history, and from growing up together on-set to supporting each other through life in the spotlight, Lovato and Gomez have maintained a deep-seated respect for one another that is unparalleled.

More like this
Meghan Markle & Prince Harry's Beef With The British Tabloids, Explained
By Brandy Robidoux
Are Demi Lovato & Noah Cyrus Dating? They're Reportedly "Hanging Out"
By Joyann Jeffrey
Demi Lovato Revealed She’s Pansexual & Says She “Likes Anything, Really”
By Caroline Colvin
Stay up to date