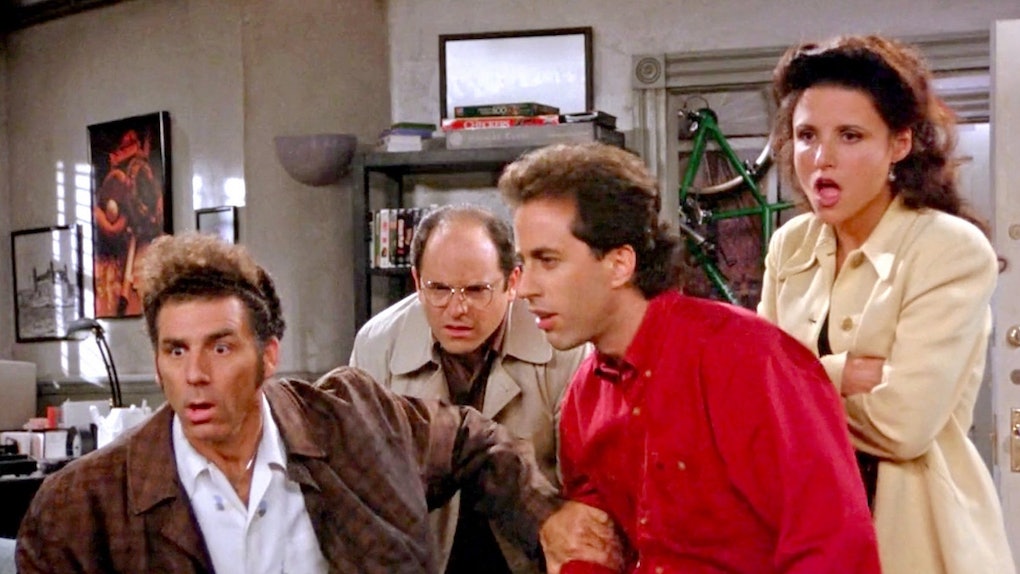 'Seinfeld' Is Coming To Netflix In 2021, So 'Friends' Fans Can Relax A Little

Sitcom lovers were pretty alarmed to learn that both Friends and The Office would be departing from Netflix in the near future, but luckily, the streaming service just secured the rights to another iconic NBC sitcom that will surely fill the hole those other two will leave. Seinfeld is coming to Netflix in 2021, as reported by Deadline, so subscribers will have another beloved series to watch and rewatch to their hearts' content.

According to Deadline's report, Netflix has struck a deal with Sony Pictures Television to become the exclusive streaming home for Seinfeld. Currently, Seinfeld is available to stream on Hulu, but the Hulu deal ends in 2021, which will be when the streaming rights move to Netflix instead. All nine seasons of Seinfeld will be available to stream on Netflix at the beginning of 2021, and Netflix will retain exclusive streaming rights for five years. Elite Daily reach out to Netflix reps for confirmation and further comment on this deal, but has not heard back by the time of publication.

This Seinfeld deal is particularly timely for Netflix, since the streaming service recently announced it would be losing two major NBC sitcoms next year. Friends and The Office currently boast the honor of being two of Netflix's most streamed series, so of course numerous subscribers were bummed when the streaming service revealed both shows would be departing. Friends is leaving in the beginning of 2020 for its new home on HBO Max, which is WarnerMedia's new streaming service; The Office will be leaving in the beginning of 2021 to go to NBCUniversal’s upcoming streamer.

As many TV fans know, Seinfeld was widely held up alongside Friends while both shows were airing as the two most successful sitcoms of the '90s. The two shows have sparked debates for years among enthusiasts who love to compare and contrast the two shows, so Seinfeld definitely feels like the perfect option for Netflix to go after in order to replace Friends.

With Seinfeld's Hulu deal reaching its end, Sony reportedly pitched the sitcom's streaming rights to various streamers. Hulu itself is looking forward to a much wider library in the near future now that it is owned by Disney, so the platform's leaders might be OK with losing Seinfeld. Meanwhile, HBO Max — seemingly the natural choice for Seinfeld's home since the streamer bought up other NBC shows — may have been tapped out after reportedly agreeing to pay $425 million for five years' worth of streaming rights to Friends; the streamer is also reportedly in talks to make a very costly deal to secure The Big Bang Theory and Two and a Half Men.

Netflix's swooping in on Seinfeld's streaming rights sounds like good timing. Plus, it probably doesn't hurt that the streaming platform already has a major deal in place with Jerry Seinfeld himself, who has two stand-up specials on the service as well as his series Comedians in Cars Getting Coffee.

Look for Seinfeld to pop up in your Netflix library early in 2021.