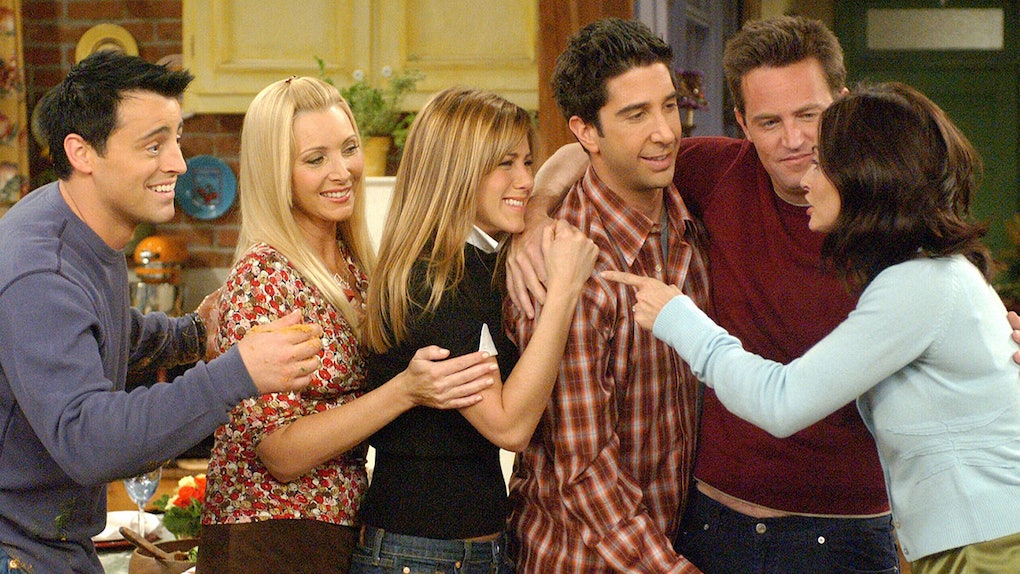 When Does 'Friends' Leave Netflix? The Show Is Officially On The Way Out

Moving out of your parents' house probably meant revisiting your favorite Friends episodes on Netflix rather than during the constant marathons on TBS, but you might need to look into season DVDs or a cable subscription soon. Following rumors that Friends would leave Netflix to settle into a new home on WarnerMedia's streaming service, the folks behind this decision have revealed they definitely aren’t on a break anymore, and the show's exit is quickly approaching. When doesFriends leave Netflix? The sitcom is officially expected to leave the streaming service in early 2020.

The beloved, long-running sitcom first became available to stream on Netflix on New Year's Day 2015, and has since become one of the few comedy series that remained there without fail. (The Office, another classic, will leave Netflix in 2021, when NBC's own streaming service launches.) Friends' exit was first rumored in late 2018 when users noticed that the sitcom's "Details" page on Netflix listed an expiration date of Jan. 1, 2019. The discovery set Twitter aflame as fans complained that, just like Ross Geller trying to mask disappointment, they were not fine about this loss of easy access to the 10-season series.

At the time, Netflix's chief content officer Ted Sarandos told The Hollywood Reporter that Friends was not leaving the streaming service. Taking advantage of the holiday season, Netflix confirmed his statement with a tweet featuring Ross (David Schwimmer) as the Holiday Armadillo and promised that Friends would remain available in the United States throughout 2019. But with that announcement came the lingering inevitability that the series would eventually leave to join WarnerMedia's streaming service, now called HBO Max.

Slated to launch in spring 2020, HBO Max will debut with "10,000 hours of content," according to Variety. A good chunk of those hours will consist of Friends episodes, as the entire series will reportedly be available on the platform. Netflix confirmed on July 9 that the series will leave its streaming library in 2020.

According to The Hollywood Reporter, HBO Max will also be home to The Fresh Prince of Bel-Air, Pretty Little Liars, all current and archived HBO series, and The CW original shows. In a statement, WarnerMedia Entertainment and Direct-to-Consumer chairman Robert Greenblatt said:

HBO Max will bring together the diverse riches of WarnerMedia to create programming and user experiences not seen before in a streaming platform. HBO’s world-class programming leads the way, the quality of which will be the guiding principle for our new array of Max Originals, our exciting acquisitions, and the very best of the Warner Bros. libraries, starting with the phenomenon that is Friends.

This isn't happy news for devout Netflix subscribers, but as always, there are still ways to get in your daily dose of Friends once it's left the platform. It's still possible to buy the series or individual seasons on DVD, and regardless of the time of day, you have a great chance of finding a Friends episode on TV if you channel surf. You can also see this as an opportunity to browse Netflix's comedy collection for a new sitcom to take over your hours of marathoning.

On the bright side, fans still have one more holiday season to enjoy Friends' Thanksgiving and Christmas episodes in a timely manner. Try to savor Rachel's beef trifle and Joey's Superman costume a little more than usual this year. Netflix has yet to announce the specific date in 2020 on which Friends will leave.