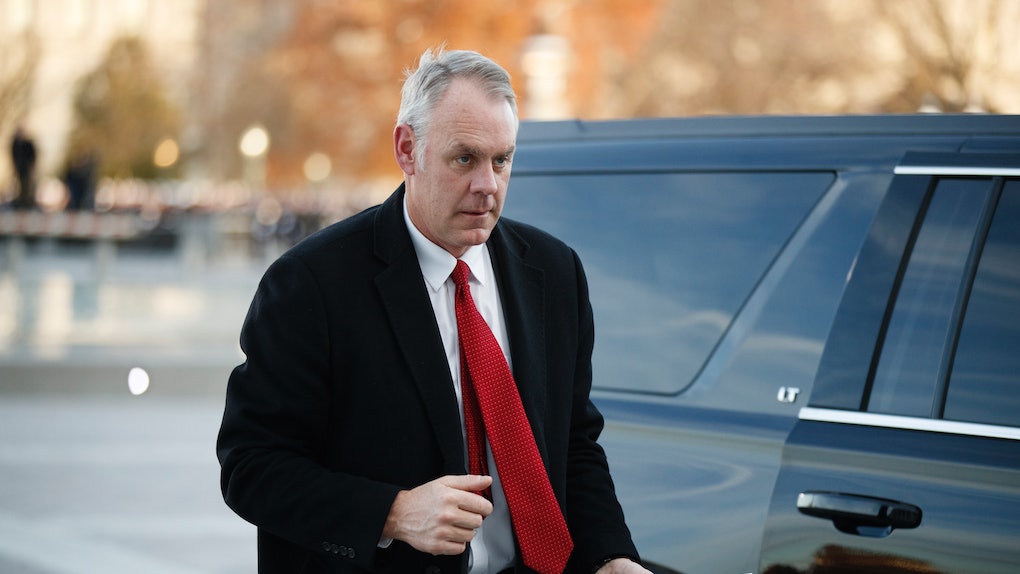 Yet another one of President Trump's appointees is stepping down as the latest casualty in the White House staff shakeup. The subject of reportedly almost 20 federal investigations, Secretary of the Interior Ryan Zinke will leave the Trump Administration at the end of the year, according to tweets from President Trump shared on Saturday, Dec. 15. Zinke, who is currently under scrutiny for reported ethics violations and possible criminal violations, is the second top-ranking government official to depart this week. Elite Daily reached out to the White House for comment on the reported ethics and federal investigations into Zinke, but did not hear back at the time of publication.

On Saturday, Dec. 15, Trump revealed via Twitter, his social media platform of choice, that Zinke will be out at the end of 2018 after less than two years in the post. He tweeted, "Secretary of the Interior @RyanZinke will be leaving the Administration at the end of the year after having served for a period of almost two years. Ryan has accomplished much during his tenure and I want to thank him for his service to our Nation......."

He continued, "The Trump Administration will be announcing the new Secretary of the Interior next week." Elite Daily reached out the White House for further comment on Zinke's planned departure, but did not hear back at the time of publication.

Zinke's departure comes just days after President Trump revealed that White House Chief of Staff John Kelly would be vacating his post and Mick Mulvaney — the director of the Office of Management and Budget — would be taking over in his stead as acting chief of staff. The White House did not immediately respond to Elite Daily's questions regarding how long Mulvaney might serve, and whether Trump intends to find someone else to fill the role full-time.

President Trump's announcement comes amidst multiple probes over ethical violations pertaining to Zinke. In April 2018, the Interior Department's Office of Inspector General found that Zinke had billed taxpayers for non-commercial flights on private planes at least three times, and that it was approved "without complete information," per Yahoo! News. This included Zinke billing taxpayers for a $12,375 flight from Las Vegas to Montana on an oil company's private plane, the resulting backlash which he called "a little BS."

At the time, Zinke reportedly told CNN, "I follow all rules, procedures, regulations and, most importantly, the law. This is another politically driven investigation that has no merit."

In addition to facing a slew of legal scrutiny, Zinke's tenure was also marked by controversy for his de-regulatory stance on habitat and resource conservation. In addition to proposing to open almost all U.S. waters to offshore drilling, Zinke's recommendation that the federal government get rid of protections for the Bears Ears and Grand Staircase-Escalate national monuments in Utah and weaken them for eight others marked the largest reduction of national monuments in history.

"Ryan Zinke will go down as the most anti-conservation Interior secretary in our nation’s history," Jennifer Rokala, executive director of the Colorado-based conservation group Center for Western Priorities said in a statement after the news broke of Zinke's departure, according to the Huffington Post. Elite Daily reached out the White House for a response to the comment on Zinke's tenure but did not hear back at the time of publication.

As mentioned in Trump's tweet, the White House will reportedly be naming Zinke's replacement next week. According to The New York Times, it's likely that David Bernhardt, a former oil lobbyist and Zinke's deputy, will step up to the plate and continue to push Zinke's policies as acting head of the department. The White House did not respond to Elite Daily's request for comment on who will replace Zinke.