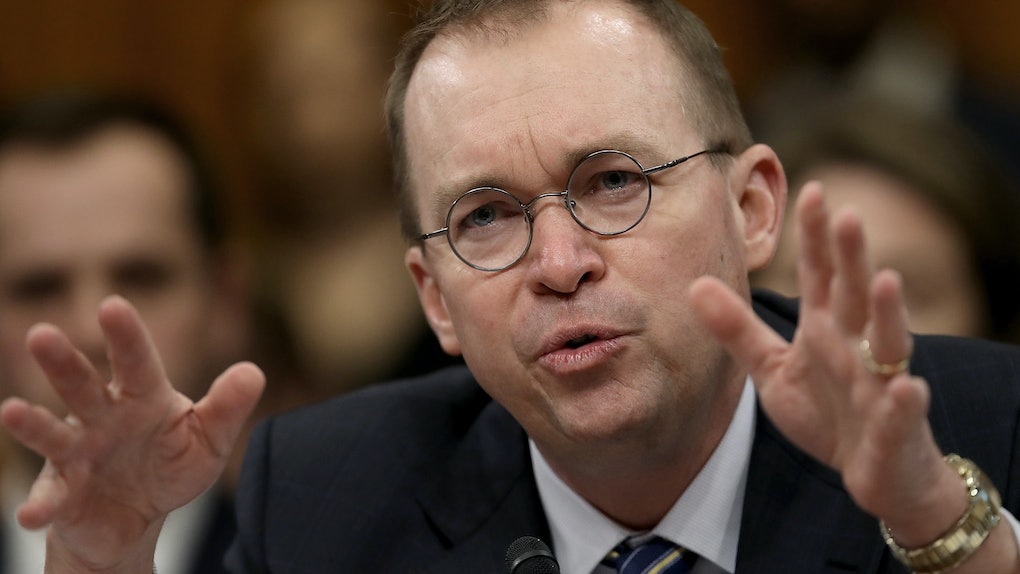 A new player is about to enter the White House scene. On Friday, Dec. 14, President Donald Trump tweeted out that he had made a decision about his new chief of staff. So who's the lucky appointee? Mick Mulvaney will be the new acting chief of staff, per the president's tweet. Best of luck to him.

Mulvaney is currently serving as the director of the Office of Budget and Management (OMB), as well as the acting director of the Consumer Financial Protection Bureau. Per CNN, Mulvaney is expected to step down from his role at the OMB in order to take over the chief of staff job. He will replace outgoing Chief of Staff John Kelly, who will leave his position at the end of the year, per an announcement from Trump.

In his Dec. 14 tweet announcing the staffing shakeup, Trump praised both Mulvaney and the outgoing Kelly. He wrote,

Mick has done an outstanding job while in the Administration.... ....I look forward to working with him in this new capacity as we continue to MAKE AMERICA GREAT AGAIN! John will be staying until the end of the year. He is a GREAT PATRIOT and I want to personally thank him for his service!

It's the finale — perhaps — of a merry-go-round of issues around the position of chief of staff in recent weeks. Kelly, who was Trump's second chief of staff and replaced 2017's Reince Priebus, was reported to be on the outs with the president towards the end of his tenure, the final downturn in a reportedly already-rocky relationship. However, after Kelly's departure was announced, Trump had a hard time finding a replacement. The reported favorite to replace Kelly, Vice President Mike Pence's Chief of Staff Nick Ayers, quickly turned down the role, apparently leaving the president at a loss. Several other candidates, including former New Jersey Gov. Chris Christie and Rep. Mark Meadows of North Carolina, also either rejected or were rejected by the president.

Now, the announcement of Mulvaney as an "acting" chief of staff is a curious one, as it appears to indicate that Mulvaney is not Trump's final choice. The White House did not immediately respond to Elite Daily's questions regarding how long Mulvaney might serve, and whether Trump intends to find someone else to fill the role full-time.

Despite Trump's claims that he had a number of eager candidates, it's maybe no surprise that people didn't exactly seem to be beating down Trump's door to work in the White House. The chief of staff gig is already said to be a pretty thankless job, and under the Trump administration it looks even less appealing. The White House seems to be in constant upheaval, with infighting and a sky-high turnover rate — and that's not to mention the ongoing Russia investigation, which has inched ever closer to the White House and could potentially leave high-level staffers open to legal jeopardy. And of course, there's the fact that any incoming chief of staff would be working for a president known to publicly abuse colleagues and subordinates when they draw his ire.

So let's have a big, warm welcome for Mulvaney as he takes on this new role. Good luck — with everything.