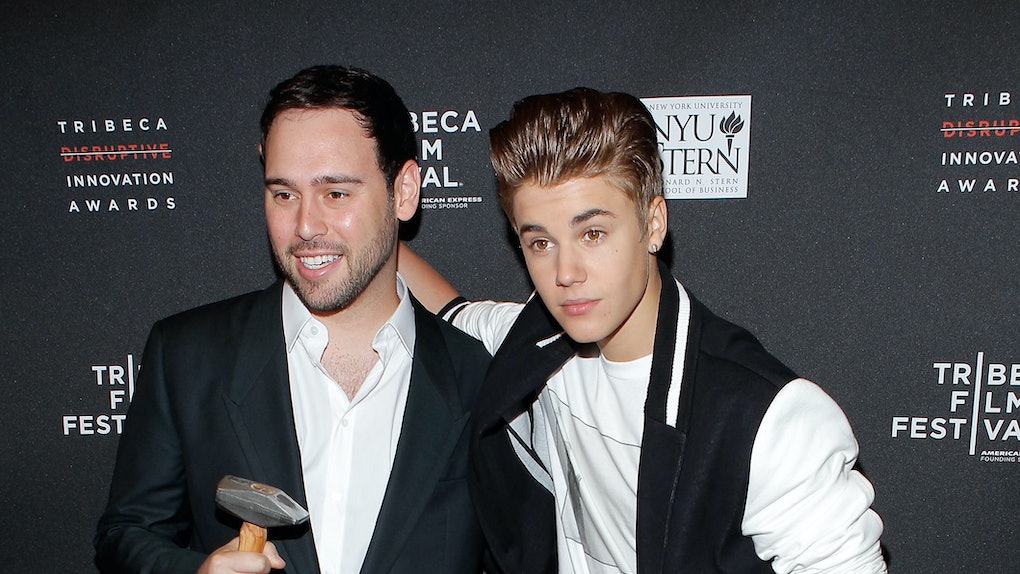 There is someone in this world that loves Justin Bieber as much as his fiancé, Hailey Baldwin, and he goes by the name of Scooter Braun, Bieber's manager. According to Braun, there was a time when he was more than just concerned for Justin Bieber's health and well-being — he worried that Bieber's entire life was in danger, which is so, so terrifying to think about. In a new interview, Scooter Braun's comments about fearing for Justin Bieber's life shows that their relationship goes way deeper than just strictly business.

The music manager went on Van Lathan's The Red Pill podcast and opened up about one of his most popular clients, Justin Bieber, and how Braun felt troubled by the fact that Justin Bieber was apparently not taking care of his body.

Elite Daily reached out to Braun's team for clarification on his comments, but did not hear back by the time of publication.

While Braun doesn't delve much further into his thoughts, he might be referencing a time period dating back to January 2014 when Bieber went through a series of unfortunate incidents, most notably when Justin Bieber was charged with an alleged DUI, as well as allegedly driving with an expired license after it was reported that Bieber may have been involved in a street race in Miami, Florida. He pleaded not guilty to the charges and the case ended with a plea deal. According to CNN, a lead prosecutor said that "the strengths and weaknesses of the case" led both sides to agree to the plea deal.

But no matter how dire the circumstances, Braun was by Bieber's side, insisting that he wait until he was back on track to give in to the demands of his career.

"He used to complain, and he used to fight it and that's when he got into a dark place," Braun said, adding, "but when he accepted his responsibility and took a hard look at himself and not what everyone was doing, that's when he owned it and he got healthy."

Braun also revealed Bieber's behavior when he wouldn't allow him to tour and perform, but ultimately, Bieber came around on his own and tried to walk down a better, healthier path. Braun said:

He used to yell and scream at me, and he wanted to put music out, he wanted to tour, but I thought if he did that, he would die. So, I just refused. I think he made a conscious choice for himself to change. I think for a year and a half I failed miserably trying to help him, because for a year and a half he didn't change… It wasn't until one day he woke up and said, 'Hey I need to talk to you, I don't want to be that person anymore.' He made the decision to change and actually put that into action. The result is who he’s become today.

Fast forward to today, and Braun said he couldn't be any more proud of the "extraordinary young man" that 24-year-old Bieber has become, and that the lifestyle he leads today (reportedly more in touch with his well-being and his recent engagement to Hailey Baldwin) are all "a result of [Bieber’s] own decisions, no one else’s."

It sounds like Justin Bieber has some pretty special people that care about him, and I think I can say on behalf of everyone that we're proud that he's really turned his personal life around.